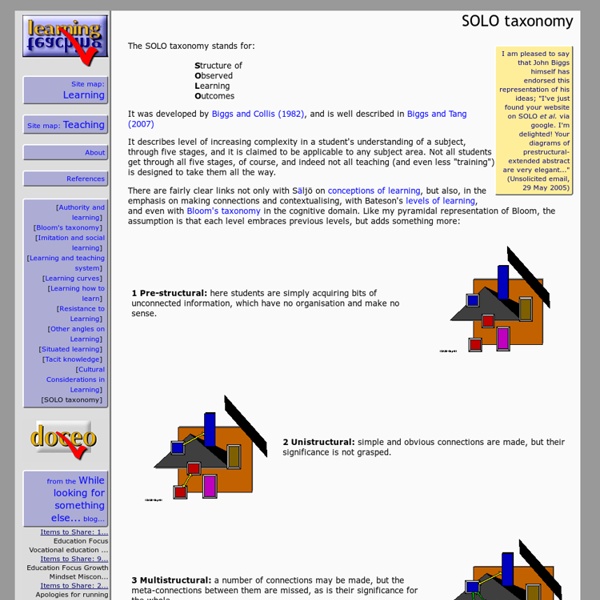 I am pleased to say that John Biggs himself has endorsed this representation of his ideas; "I've just found your website on SOLO et al. via google. I'm delighted! Your diagrams of prestructural-extended abstract are very elegant..." (Unsolicited email, 29 May 2005) The SOLO taxonomy stands for: Structure of Observed Learning Outcomes It describes level of increasing complexity in a student's understanding of a subject, through five stages, and it is claimed to be applicable to any subject area. I confess to a slight distrust of this kind of "progressive" model, which aspires inexorably to a final state. However, the emerging field of work on Threshold Concepts and Troublesome Knowledge links in very effectively with the SOLO taxonomy and offers some points about how the above issues might be addressed. There is a small but enthusiastic group of teachers using the SOLO taxonomy to structure their teaching in schools, and blogging about it.

Bloom’s Activity Analysis Tool I have been working on a simple method of analysing teaching and learning technologies against Bloom’s Digital Taxonomy. I have taken the verbs associated with each of the taxonomic levels and arranged them across a sheets and then added a column for the activity components. The idea is that you take your activity and break it down into the component elements and match these against the different taxonomic levels and the learning actions. For example if you looked at students constructing a wiki Editing the wiki is applyingSearching for the information – rememberingTagging the pages with suitable and detailed keywords and notes is understandingValidating the information is evaluatingUploading the resources to the wiki is applyingCollaborating and networking is a higher order skill and so on Here is the PDF version of this tool – blooms-activity-analysis This is a first draft and I would appreciate comments and suggestions.

Improving the effectiveness of large-class teaching in law degrees Sascha Mueller, Ursula Cheer, Lynne Taylor, Elizabeth ToomeyAuthors Associate Professor Lynne Taylor, Professor Ursula Cheer, Professor Neil Boister, Professor Elizabeth Toomey, Sascha Mueller, Dr Debra Wilson – University of Canterbury. Date completed: May 2012 About the project In this project, a group of 6 University of Canterbury School of Law lecturers investigated current methods of teaching large compulsory law classes. individual School of Law national and international. Methodology The 6 parts of the project were: a national and international literature review survey of advancing law students at the University survey of staff teaching at the law school focus groups involving a selection of advancing law students from the survey group analysis of the data development of good practice guidelines. Themes Implementation Implementation is taking place at 3 levels: Individual – the teaching staff involved in the study have made changes to their teaching of large classes. Presentations

Waikato Journal of Education 16(1) 2011 Heutagogy Community of Practice | Advancing the Theory and Practice of Self-Determined Learning Multiple Perspectives: Building Critical Thinking Skills ReadWriteThink couldn't publish all of this great content without literacy experts to write and review for us. If you've got lessons plans, activities, or other ideas you'd like to contribute, we'd love to hear from you. More Find the latest in professional publications, learn new techniques and strategies, and find out how you can connect with other literacy professionals. More Teacher Resources by Grade Your students can save their work with Student Interactives. More Home › Classroom Resources › Lesson Plans Lesson Plan Overview Featured Resources From Theory to Practice This lesson develops students’ critical thinking skills through reading and interacting with multiple-perspectives texts. back to top Clarke, L.W., & Whitney, E. (2009). As a result of state standards that require students to engage in critical and analytical thinking related to texts, teachers have been turning toward the notion of critical literacy to address such requirements.

Video Uses Student Voices to Explore New Directions in Education - Wired Campus Michael Wesch, an associate professor of cultural anthropology at Kansas State University, began “The Visions of Students Tomorrow” on January 18. It is a new video-collaboration project that he hopes will help generate a conversation about the “media-ated life” of many students. He wants not only to gain insights into how students interact with their dense and ever-changing media environment, but also to tackle the question of whether instructors have kept pace with it. Mr. Wesch has been responsible for such popular video projects as “Web 2.0 … The Machine is Us/ing Us,” which has more than 11 million views on YouTube, and “A Vision of Students Today,” with more than four million views. He wants “to hear from probably the most important voice in the question of where to go next with education, and that voice, of course, is the students themselves.” To gather those voices, Mr. Return to Top

Parents Debate the Ban on Cell Phones in Class Guest post by Lisa Cooley | Cross posted at The Minds of Kids An interesting conversation took place this morning between my daughter, her two middle-school-age friends, my husband and I. It was about cell phones in school; the general complaint from the girls was about the ban on using cell phones, even at lunchtime.The conversation turned to the ban in classrooms, and my husband, who I have apparently failed to bring up to speed on cell phone issues, brought up what he felt to be an issue of common courtesy: that kids should have cell phones turned off when in class, and their attention turned to the person who is trying to teach them. Reasonable, right? Unfortunately our whole system of education is based on kids learning stuff they don't care about. Not only do we need to design schools that allow kids to connect to learning that matters to them, but we need to allow them to do it with their cell phones.

Apple's iPad Officially Passes the Higher Education Test [Exclusive] Apple’s iPad received glowing marks for its performance in college classrooms from the eagerly anticipated Reed College evaluation, according to a new report shared with Fast Company. The iPad’s smooth interface kept up with the lighting-quick pace of college lectures, helping it to overcome the very same gauntlet that killed the Kindle’s hope of education dominance a year earlier. Most importantly, the report predicts an explosion of opportunity for both Apple software developers and tablet competitors. After extensive student interviews throughout the Fall 2010 semester, "The bottom line feeling was that the Amazon Kindle DX was not adequate for use in a higher education curricular setting," Chief Technology Officer Martin Ringle tells Fast Company. The most impressive iPad feature was also the simplest: a smooth scrolling touchscreen. The silver-medal feature, with only a few strikes against its score, was the highlighting and annotation of text.

10 Sites To Send Free Text Messages To Cell Phones (SMS) With SMS messages becoming a key utility in today’s modern world, we are finding ourselves sending more and more of them. But the telecommunications industry is charging a fairly high price on 160 characters. So what can we do about it? We can send SMS messages for free, or for a very low price by utilizing the magic power of the internet. The only downside with this is that you have to be sitting in front of a computer, unless of course you have one of those hi-tech phones with internet capabilities. So where are these free text message services hiding? Yakedi If you are anywhere but in Australia, unfortunately this service will not work for you. Pros You get the full 160 character for each SMS you sendThe messages come from your phone number and not someone else’sYou have a contact list so you can select contactsTheir is no advertisements in SMS messages. Cons Final Say GizmoSMS The good thing about GizmoSMS is that you can send free text messages to any number world-wide. SMS Pup Con’s

Questioning Authority: Evaluating Wikipedia Articles Jim Wilson/The New York TimesSue Gardner, executive director of the Wikimedia Foundation, with an assistant, James Owen.Go to related article » Overview | If Wikipedia is a collaborative project open to all, why are fewer than 15 percent of the site’s contributors women? How authoritative and complete do Wikipedia articles tend to be? Materials | Copies of the Fill-In: Wikpedia and Gender (optional), student journals, computers with Internet access Warm-up | Give students 10 minutes to complete the Fill-In: Wikpedia and Gender, which introduces them to the article they will be reading in class. Next, give students two minutes to write down as many topics they have looked up on Wikipedia as they can remember. Now discuss students’ experiences with Wikipedia, now in its 10th year as an online reader-generated public encyclopedia. Related | In the article “Define Gender Gap? In 10 short years, Wikipedia has accomplished some remarkable goals. Technology 2. Language Arts 1.