1 Checklists. "Mystery plant" from the Amazon declared a new species after nearly 50 years. In 1973, a scientist stumbled upon a strange tree in the Amazon rainforest, unlike anything he'd ever seen. 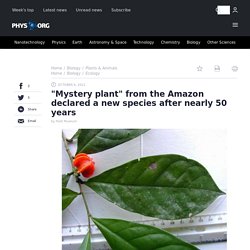 It was about 20 feet tall, with tiny orange fruits shaped like paper lanterns. He collected samples of the plant's leaves and fruits, but all the scientists he showed them to wound up scratching their heads—not only were they unable to identify the plant as a species that had previously been described by scientists, but they couldn't even declare it a new species, because they couldn't tell what family it belonged to. Flippant attitudes towards plant identification jeopardize early career botanists. Safeguarding measures: towards good and safe practice by all and. 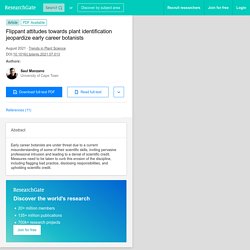 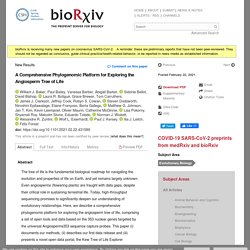 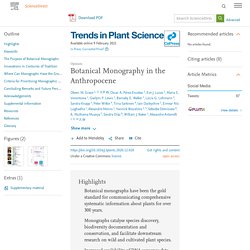 Amid alarmingly high rates of species invasions [5], range shifts (see Glossary) [6] and extinctions [7], there has never been greater urgency to document the estimated 20% of the Earth’s flora that remains to be scientifically described [8]. The dark side of the genome. The Knowledge About (Digital) Specimens is in the Published Literature. November 10, 2020 Presentation Open Access Agosti, Donat; Guidoti, Marcus; Dikow, Torsten; 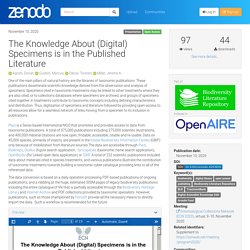 Repositories for Taxonomic Data: Where We Are and What is Missing. Skip to Main Content Advertisement Search Close. 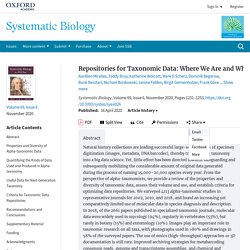 Taxonomy: stable taxon boundaries. How plants are named and how the RHS ensures naming standards. Floras of the Future: A look at Flora of North America Online. One of several interactive workshops offered at Botany 2020 was on the digital Flora of North America (North of Mexico, to give it its full name; FNA for short), which can be found in beta here. 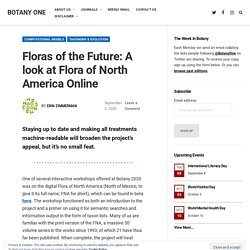 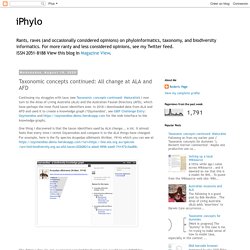 In 2018 I downloaded data from ALA and AFD and used it to create a knowledge graph ("Ozymandias", see GBIF Challenge Entry: Ozymandias and for the web interface to the knowledge graph). One thing I discovered is that the taxon identifiers used by ALA change... a lot. It almost feels that every time I revisit Ozyamndias and compare it to the ALA things have changed. For example, here is the fly species Acupalpa albimanis (Kröber, 1914) which you can see at.

Inference: International Review of Science. In response to “A Quiet Revolutionary” (Vol. 5, No. 1). 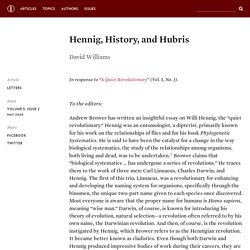 To the editors: Andrew Brower has written an insightful essay on Willi Hennig, the “quiet revolutionary.” Hennig was an entomologist, a dipterist, primarily known for his work on the relationships of flies and for his book Phylogenetic Systematics. Inference: International Review of Science. Since prehistory, humans have observed aspects of the living world around them and categorized organisms based on their salient features. 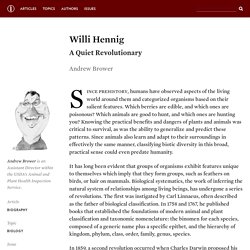 Which berries are edible, and which ones are poisonous? Which animals are good to hunt, and which ones are hunting you? Principles for creating a single authoritative list of the world’s species. Abstract Lists of species underpin many fields of human endeavour, but there are currently no universally accepted principles for deciding which biological species should be accepted when there are alternative taxonomic treatments (and, by extension, which scientific names should be applied to those species).

As improvements in information technology make it easier to communicate, access, and aggregate biodiversity information, there is a need for a framework that helps taxonomists and the users of taxonomy decide which taxa and names should be used by society whilst continuing to encourage taxonomic research that leads to new species discoveries, new knowledge of species relationships, and the refinement of existing species concepts. Citation: Garnett ST, Christidis L, Conix S, Costello MJ, Zachos FE, Bánki OS, et al. (2020) Principles for creating a single authoritative list of the world’s species.

PLoS Biol 18(7): e3000736. Published: July 7, 2020 Copyright: © 2020 Garnett et al. New books present the PhyloCode, an evolution-based system for naming organisms – Florida Museum Science. Move over, Linnaeus: There’s a new way of naming organisms. Scientists have formalized an alternative set of rules 285 years after the publication of the first edition of “Systema Naturae,” the landmark volume marking the beginning of the rank-based system for categorizing and naming life. Known as the PhyloCode, this system defines scientific names based on evolutionary relationships.

Phylogenetics in the Genomic Era - Table of Contents. [New publication] - Meise Botanic Garden meets important educational needs. Meise Botanic Garden has just launched a new publication, which provides an introduction to the field of botanical classification and naming (plants and fungi). It is available for free (Open Access) in both the English and French languages, as hard copy and electronically as PDF. Plants and the People Who Name Them: The International Plant Names Index and BHL.

At the end of the twentieth century, the The Royal Botanic Gardens, Kew, The Harvard University Herbaria, and The Australian National Herbarium began collaboration on an ambitious project—to create an online index of names for all of the world’s vascular plants [1]. By combining the data in the nomenclatural indices of these three institutions—namely Index Kewensis, the Gray Card Index, and the Australian Plant Names Index—the collaboration created the International Plant Names Index (IPNI).

Hosted by the Royal Botanic Gardens, Kew, today the database includes over 1.6 million records. How many people does it take to revise a genus? In 1994 I was in a forest in the Central African Republic standing in front of a tree. I remember the moment well. I turned to my companion, Bakembe – part botanical wingman, part guru on forest living. He said “liambamba”. I picked up a fruit from the ground and glanced at him meaningfully and he repeated “liambamba – but different”. Muscles in my abdomen tightened and I got that feeling that I assume all taxonomists get when they realise they have something that is “the same but different”.

Towards visualising classifications from Wikidata. National Botanical Conservatory of Brest. Report on botanical nomenclature—Melbourne 2011. What is a specimen: ref 2017. Phylogenetic Toolbox. Assembling, Visualizing, and Analyzing the Tree of Life. Introduction to plant phylogenomics with a focus on palms. Global Genome Biodiversity Network: saving a blueprint of the Tree of Life. Phytologia.org.

Twin plants named after Arnold Schwarzenegger and Danny DeVito following DNA discovery. Naming Species on ebay. Scientist, Non-Profit Auction Naming Rights To New Plant Species. Average of 8 new species a month in New Caledonia. On a recent field trip,I learnt that species named after places can give pride and a sense of responsibility to locals. Invaluable for conservation! This is #Calamus lambirensis, home to #Borneo's incredibly diverse #LambirHillsNP and surrounding regions.