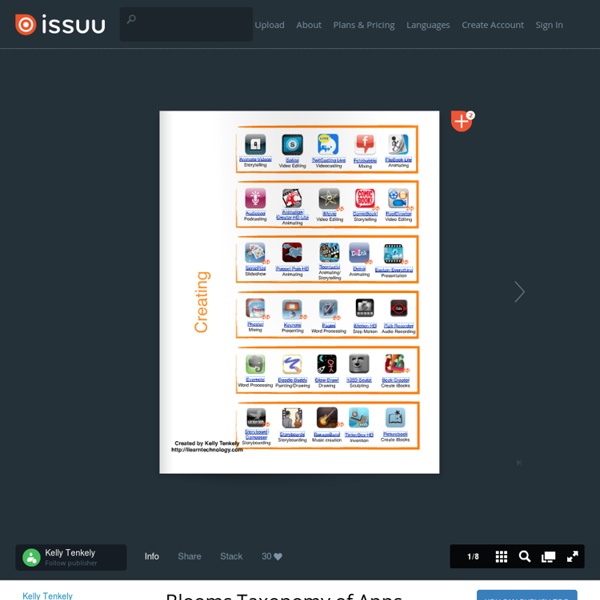 iPurpose before iPad The two above images are good examples of purposeful thinking about iPad usage in schools. One, a screenshot of an oft-used tool known as iPad As.. by edtechteacher.org, focuses on what the iPad can be used for and provides links to various apps that can be utilised for those functions. It goes without saying that it is a very useful website for schools thinking about iPads. Mobile Learning: 50+ Resources & Tips I believe mobile devices will transform education. This is why I created a free ebook, Effective Mobile Learning: 50+ Quick Tips & Resources with helpful tips and several resources to help support this trend. One reason is because mobile devices are designed in a way that forces the teacher to give control to the learner. When we equip a classroom with iPads, iPods, small tablets, or cellphones the learning is literally put in the hands of the students. The teacher has to facilitate and walk around the room to manage the learning.

A Good iPad Fluency Graphic for Teachers Developing and maintaining a productive workflow while using iPad is not an easy thing to do. It does not only take knowing and installing all the necessary apps, students need to build a momentum , working on their apps and using them judiciously. Building such a momentum is a process of habituation that calls for repeated actions. It does take some time for students to get used to develop these skills but once they do their use of iPad becomes fluently productive. K-5 iPad Apps for Remembering: Part One of Bloom's Revised Taxonomy (Updated 10/2013) It is Benjamin Bloom's belief that the entry point to learning is the acquisition of knowledge. He postulates that a solid foundation of terms, facts, theories, and skills is the educational base that will allow the mind to evaluate information effectively and inspire innovation. Our schools' emphasis on and devotion to standards-based instruction and high-stakes testing reflects a desire for students to become proficient at memorizing terms, and facts as well as and mastering various sets of skills. Yet, we live in an age of "too much information" where facts are readily available on the mobile devices carried in our pockets.

mobile learning Well like a lot of people I’ve bought an iPad over the summer and I’ve been having my first taste of shopping for apps to extend the capabilities of the iPad. I’ve also been having a look at how some of these can be used for language learning, so I thought I would share with you a little bit of information about the first few apps I’ve tried. ForvoFor those of you who don’t know Forvo, it’s a marvelous pronunciation dictionary site which is collecting together audio examples of of the pronunciation of different words from languages and speakers all round the world. The app works as a simple pronunciation dictionary which you can carry with you in class and whenever a new word comes up, you can get an example pronunciation form it. For many of the more common words in English you can get multiple examples from different speaker (male, female, UK, US, Australian etc.)

iPads In The Classroom: The Right Questions You Should Ask The pressure is on to make sure the education of U.S. students is on track with their global peers. Unfortunately, according to a 2015 report by Pew Research Center, that’s not the case, particularly in the areas of science and math. It’s no wonder, then, that in the quest for educational advancement, teachers want their students to have access to the newest, theories, processes and technologies to help the students excel. One of the most popular technologies has been the introduction of tablets, particularly, iPads, in the classroom. Maybe you’ve been thinking about augmenting your program with iPads or another type of tablet.

50 Free Android Apps Being Used In Education Right Now I’ll admit it. I’m a fan of Apple products. But that doesn’t mean I don’t yearn for some of the fabulous features on Android phones too. Web 2.0 per la scuola Upload Anna Risi Loading... 4 Visual Guides To Bloom's Taxonomy Apps Yesterday, we looked at an overview of the old and revised versions of Bloom’s taxonomy . We talked a little bit about categorizing current classroom activities to see which of Bloom’s objectives you’re addressing (whether intentionally or unintentionally). Today, we’re looking at some apps and web tools that address the Bloom’s taxonomy objectives – helping bring Mr. Bloom into the 21st century. There are a ton of great lists out there that showcase many (many, many) apps and digital tools that address the objectives.

Lesson Plans There is a lot of evidence to prove that sustained silent reading is exceedingly beneficial both inside and outside the classroom and a key advantage of mobile devices is the ease with which students can have access to rich reading resources. Additionally, it is also possible to follow the written word on the page, whilst listening to an oral rendition of the text. This is particularly important to students whose mother tongue is written in a script that is not the Roman Alphabet and as in the case of Arabic, does follow the same spelling rules. Vowels are often not represented in written Arabic,: and thus students forget to incorporate them into their written English. Our institution subscribes to the Oxford Bookworms Series of Graded Readers for EFL students. I would like to share some of the activities I have done with my students using this online reading resource and other digital programmes.

iPad Workflow Solutions for Educators Recently, I attended ITEC 2012 -Iowa’s premier technology conference for educators. David Pogue and Marco Torres were the keynote speakers, but there were dozens of other excellent breakout sessions over the course of this three-day event. I myself had the opportunity to present twice, so I opted for a couple of iPad sessions that I had been wanting to talk about for some time now, and I have included the slides to the first of these two sessions below – iPad Workflow Solutions for Educators. A digital workflow for the iPad, or the process of getting student work to and from the device, has long been a subject of some consternation among those who use iPads in the classroom. Why? The reason is simple.