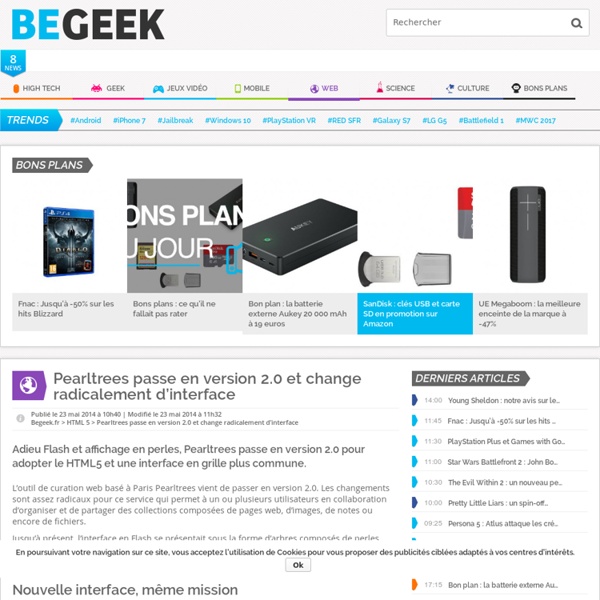 Pearltrees releases a new version, without any pearls nor trees The Paris-based startup founded in 2009 once declared: “We focus on the visual potential of Pearltrees to let people dive deeply into their interests and nearly feel them”. Their product, offering a digital curation tool, was unique because of the visual interface voluntareely original: links and folders symbolized by rounded pearls attached together like the branches of a tree. Today, pearls and trees have disappeared to make room for a brand new and larger organisation tool. Two years ago, everyone wanted to build products around “curation” and “interest graph”.

Pearltrees Radically Redesigns Its Online Curation Service To Reach A Wider Audience Pearltrees, the Paris-based online curation service that launched in late 2009, was always known for its rather quirky Flash-based interface that allowed you to organize web bookmarks, photos, text snippets and documents into a mindmap-like structure. For users who got that metaphor, it was a very powerful service, but its interface also presented a barrier to entry for new users. Today, the company is launching a radical redesign that does away with most of the old baggage of Pearltrees 1.0.

19 Reasons You Should Include Visual Content in Your Marketing [Data] Pretty pictures are the best. But you know who likes them even more than your readers, leads, and customers? Marketers. Product Strategy Means Saying No If you’re building a product, you have to be great at saying No. Not ‘maybe’ or ‘later’. The only word is No. Building a great product isn’t about creating tonnes of tactically useful features which are tangentially related. It’s about delivering a cohesive product with well defined parameters. Pearltrees 2.0 Launches with a Brand New User Interface Today Pearltrees officially separated itself from its unique visual interface made of pearls and pearltrees, finally succumbing to the trend of Pinterest-like user experience. It might be more practical for the majority of users to sort and collect content with the new Pearltrees 2.0, however, some people might regret the innovative former interface that allowed to discover related content rapidly by browsing an “ocean” of Pearls. Users still have the possibility to go back to the “pearly” version accessible from the menu in the settings section. Now the Pearltree has been replaced by the “Collection” which is basically a “folder” (or a board) containing various types of content of a topic, for instance, you can collect web pages, images, and notes, just like you can do with Evernote and Pinterest. Unlike Evernote, you are able to browse the public content collected by other users, and if you feel the need to make your content private, the premium version offers the feature.

Reflexive relation Related terms[edit] A relation that is irreflexive, or anti-reflexive, is a binary relation on a set where no element is related to itself. An example is the "greater than" relation (x>y) on the real numbers. Note that not every relation which is not reflexive is irreflexive; it is possible to define relations where some elements are related to themselves but others are not related to themselves (i.e., neither all nor none). Pearltrees: 3 years and €8.5 million later, there's finally talk of a business model In Europe, as many of you may already know, people tend to talk about business models much earlier in the game than they do in the US. In fact, it’s a widely-held belief that European investors don’t tend to invest in companies that aren’t generating cash (which many believe explains the French VCs’ love for e-commerce). While US companies like Instagram, Pinterest, Quora and the likes are busy amassing millions upon millions of non-paying users prior to even talking about their business models (oh wait, Pinterest actually does make money?), European companies are more often than not approaching things from the opposite end. In fact, it is so engrained into European startups’ brains to talk about business from the get-go that Ohai’s Susan Wu shocked the Paris tech scene at Le Camping’s Fest event last year when she told a startup that their business model wasn’t important at their current stage and they could worry about it later.

Pearltrees: Curation Tool Drops Flash And User Interface For Pintrest-like Format -SVW Posted by Tom Foremski - May 23, 2014 Pearltrees (a former consulting client) this week introduced the 2.0 version of its popular web page curation tool built completely with HTML 5.0 and with a completely different user interface and metaphor. The tool now represents web pages as a series of rectangles in a "dynamic grid" allowing users to quickly organize and share their web collections. The prior interface was based on circles, or "pearls" connected in a molecular pattern to other "pearls." Sometimes new users thought it looked complicated and the user interface change simplifies people's first impressions.