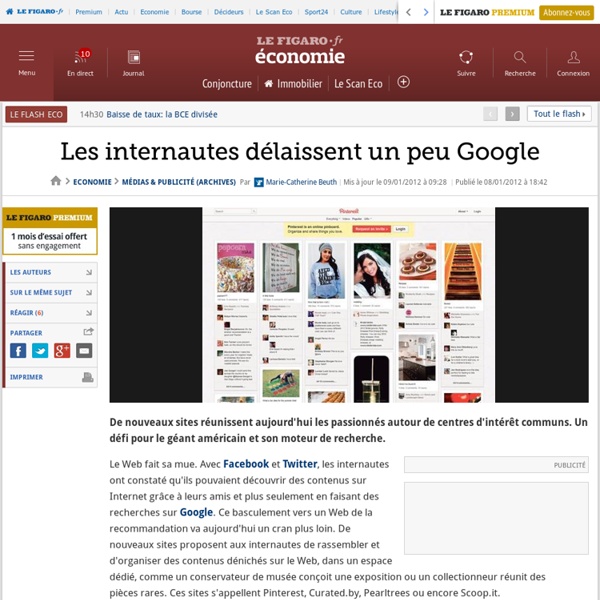 Education Archive archive.org download counts of collections of items updates and fixes Every month, we look over the total download counts for all public items at archive.org. We sum item counts into their collections. At year end 2014, we found various source reliability issues, as well as overcounting for “top collections” and … Continue reading

Pinterest: Behind the Design of an Addictive Visual Network Ever find yourself in the rabbit hole of the internet, bookmarking and screengrabbing things you want to buy or images that inspire you? Well, judging from Pinterest's hockey-stick growth, you're not alone in your digital collecting and curating. The invite-only social discovery platform launched in March 2010, the brainchild of Paul Sciarra, Evan Sharp and Ben Silbermann, with the mission to "connect everyone in the world through the 'things' they find interesting," opining that books, recipes and items can bridge the gap between strangers. In October, the site surpassed 421 million pageviews, which means that each of its 3 million users are spending quite a bit of time there, pinning and organizing images to help them plan their weddings, decorate their (oftentimes, dream) homes, create bucket lists and manage an inventory of favorite images — no small feat on the ever-growing web. Pinterest's simplicity and browsability comes from the nimble fingers of designer Evan Sharp.

Comcast Brings Live Streaming TV to iPad Comcast has added live streaming TV on an iPad to its service at no additional cost, although it’s currently available only to its Xfinity HD Triple Play subscribers in Denver and Nashville. The company will add more markets in coming months, according to AppleInsider. The new functionality, known as AnyPlay, works only over a home Wi-Fi connection, and it’s only available on the iPad now, although support for the Motorola Xoom tablet is in the works. On the road or on a cellular network, Comcast customers need to use the Xfinity TV software to access On Demand movies and TV shows. There’s another potential catch: AppleInsider noted that when AnyPlay’s existence was first known last September, a leaked memo said that the service would be limited to one device at a time, with a maximum of 10 registered tablets per home. It’s not clear if those restrictions are in place now that the service has launched.

Nick's Picks for Educational Technology: Pearltrees - Organize and Share Digital Resources Posted March 13, 2015 by Nick LaFave under Sharing Content Pearltreeswww.pearltrees.net Pearltrees has always been much more than a social book marking tool — it allows users to collaboratively gather websites, photos, and notes and organize them into visually appealing collections (similar to folders).

You are what you curate: why Pinterest is hawt Evolution of social media by Elad Gill (graphic courtesy of Elad Gill) Updated: The new hot social thing on the web these days is a Palo Alto, Calif.–based company started by Ben Silbermann, Paul Sciarra and Evan Sharp. Motorola wins Apple wireless patent fight in Germany 9 December 2011Last updated at 10:25 ET Motorola Mobility could now try to force Apple's 3G products off Germany's shop shelves A German court has ruled in Motorola Mobility's favour in a patents dispute with Apple.

PearlTrees: A Tool for Organizing Online Resources I love learning new tech tools, and while I'd heard of PearlTrees before, I had never taken the time to work with it. It's a pretty slick tool! Basically, PearlTrees is a social bookmarking tool, but the design of it makes it particularly conducive to creating a curated collection of resources about a given topic. A Guy's Guide To Pinterest One of the first things I noticed when I signed up for Pinterest earlier this week is that several of my female friends and acquaintances were already on the site. It was as if they had been holding out on what many are promising will be 2012's hot ticket in the social networking space. Of the 16 people Pinterest said I knew who were already using the site, 14 were women. Over the course of the first day, five more women I know added me and I suddenly felt like I had ventured behind some secret curtain. That is not surprising: in December, Mashable reported that 59 percent of the site's visitors were women between the ages of 25 and 44, and that 58 percent of its visitors in the previous 12 weeks had been female.

iCam: what the Apple camera could look like - Yahoo!7 CNET Technology It is now well known that Steve Jobs wanted to reinvent photography, but, apart from the Apple QuickTake, we don't have much of an idea of what this Apple camera could have looked like. Thanks to Italian designer Antonio DeRosa, here is a very nice render of what he calls the "iCam". An accessory for the iPhone 5, DeRosa has visualised the iCam as having an aluminium unibody case that uses interchangeable lenses, a front touchscreen for self portraits, an LED flash, a pico projector and a 10.1-megapixel sensor. While these features might sound a bit farfetched for a mobile, plenty of them appear on compacts from companies like Samsung (front screen) and Nikon (projector). It's also worth noting that the lens that appears in the mock-up looks a lot like the one used on the Nikon 1 series of interchangeable lens cameras ... What features would be on your iCam wishlist?