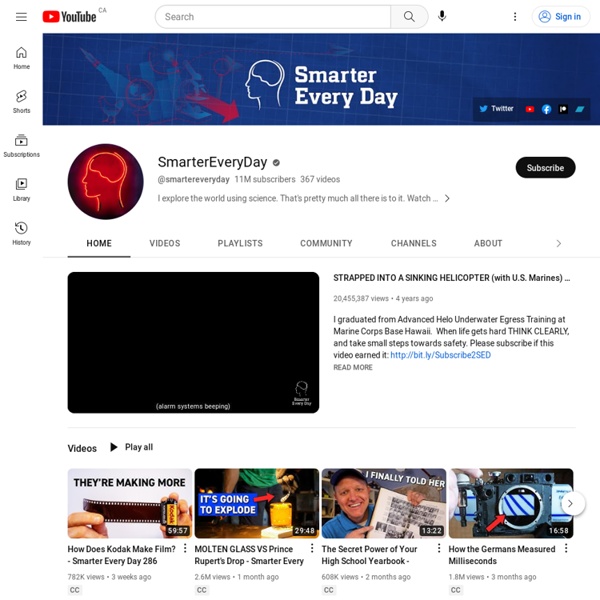 storybots The StoryBots travel to the Land of the Lymph to learn how a cold virus spreads, how the immune system in our bodies fights viruses, and what we can do to stay healthier. (Wash your hands!) SUBSCRIBE: About Netflix Jr.:Welcome to the official Netflix Jr. channel! Where kids can learn, sing and play with their favorite Netflix characters - from StoryBots to Super Monsters and everyone in between. Big Think There are only two events in the universe that defy the laws of physics: black holes and the big bang, and while scientists try to explain them, crucial evidence may be eaten up in the meantime. Christophe Galfard's book is "The Universe in Your Hand A Journey Through Space, Time, and Beyond" ( Read more at BigThink.com: Follow Big Think here:YouTube:

C. G. P. Grey How do all the algorithms around us learn to do their jobs?**OMG PLUSHIE BOTS!!**: Bot Wallpapers on Patreon: DIY TV Win the chance to get your animation shown on Cartoon Network! This contest is for folks 17 and under. More info: Why Nerds are Unpopular February 2003 When we were in junior high school, my friend Rich and I made a map of the school lunch tables according to popularity. This was easy to do, because kids only ate lunch with others of about the same popularity. We graded them from A to E. A tables were full of football players and cheerleaders and so on.

NASA-backed fusion engine could cut Mars trip down to 30 days High performance access to file storage NASA, and plenty of private individuals, want to put mankind on Mars. Now a team at the University of Washington, with funding from the space agency, is about to start building a fusion engine that could get humans there in just 30 days and make other forms of space travel obsolete. Watch Well Cast - videos about wellness and mental health Wellcasters relax! Too much stress in your life causes headaches, high blood pressure, tummy aches, memory loss and all other kinds of nasty stuff. But, how can you tell if you are showing stress symptoms? Check out our video for advice on how to tell when you're stressed out and simple tips to relieve tension quickly. From little things you can do everyday to promote relaxation to strategies to cool off when you're in the heat of the moment, we've got advice on the best ways to sit back and relax!

Can Mushrooms Be The New Plastic? Today, plastics are among the most toxic and polluting substances we use on a daily basis. Simply focusing on styrofoam alone, it is a $20+ billion industry who’s products are found in anything from TV protective packaging to disposable coffee cups. The trouble with all of this styrofoam is that it cannot be recycled or disposed of. Once created, it stays on the planet for thousands and thousands of years. Styrofoam is petroleum based and contains a carcinogenic and neutroxic chemical called Benzene.[1] In 1986, the Environment Protection Agency National Human Adipose Tissue Survey identified styrene residues in every single sample of human fat tissue they studied, all of which were complied in 1982 within the US. This was the first time it was recognized that styrene from food and other packaging could find its way into the human body.[2] Simply put, styrofoam is not only poisoning our environment but also our bodies due to its highly toxic nature.

TinyGrads DOWNLOAD an mp3 of this song for ONLY $1 (click below): To watch our videos with NO ADS, visit our website by clicking: Thanks so much for watching! Sing along with TInyGrads' Little Mandy Manners about putting things away. This is a fun song for children on the importance of being clean and putting your toys away after you are done playing with them. On “Geek” Versus “Nerd” To many people, “geek” and “nerd” are synonyms, but in fact they are a little different. Consider the phrase “sports geek” — an occasional substitute for “jock” and perhaps the arch-rival of a “nerd” in high-school folklore. If “geek” and “nerd” are synonyms, then “sports geek” might be an oxymoron. (Furthermore, “sports nerd” either doesn’t compute or means something else.) In my mind, “geek” and “nerd” are related, but capture different dimensions of an intense dedication to a subject:

Chinese physicists measure speed of Einstein’s ‘spooky action at a distance’: At least 10,000 times faster than light A team of Chinese physicists have clocked the speed of spooky action at a distance — the seemingly instantaneous interaction between entangled quantum particles — at more than four orders of magnitude faster than light. Their equipment and methodology doesn’t allow for an exact speed, but four orders of magnitude puts the figure at around 3 trillion meters per second. Spooky action at a distance was a term coined by Einstein to describe how entangled quantum particles seem to interact with each other instantaneously, over any distance, breaking the speed of light and thus relativity.