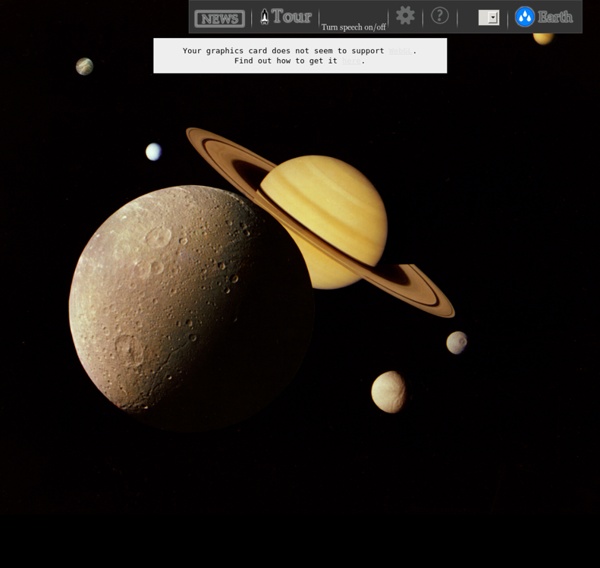 Your Age on Other Worlds Want to melt those years away? Travel to an outer planet! <div class="js-required"><hr> This Page requires a Javascript capable browser <hr></div> Chapter 1: Matter—Solids, Liquids, and Gases Note: Some solids, liquids, and gases are made of atoms, and some are made of molecules. Since the concepts covered in Chapter 1 apply to both atoms and molecules, the term “particle” is used as a generic term to include both. At this point, it is enough to give students simple working definitions of “atom” and “molecule.” Magnifying the Universe Embed this infographic on your site! <iframe width="500" height="323" scrolling="no" src=" frameborder="0" allowfullscreen></iframe><br />Copyright 2012. <a href=" the Universe</a> by <a href=" Sleuth</a>. The above is an interactive infographic.

Microbiology Unit Study This school year I had planned to use Ellen McHenry’s Cells with my highly creative 10 year old visual-spatial learner. We had both really enjoyed her Excavating English book, but I can’t say our experience was similar for the cells book. My son was not connecting with the material. If I have learned anything about teaching this kid, it is that we are wasting time if the material isn’t connecting with him. After several weeks using the Cells book and trying a few different ways to make it work, I decided to ditch it in favor of a personalized unit study. I knew he would do well with that format. Across Our Blogs: Mars Curiosity Rover Moonrise, New Rover, Billion Pixel Marsscape Seems the Mars Curiosity Rover has been a busy little six-wheeled fellow these past few weeks. Here's a roundup of news related to the rover, from top Technorati listed science blogs... From ArsTechnica - Curiosity rover shoots video of Martian moonrise - NASA released a time-lapse video of the Martian moon Phobos, as it ascends into view. From GizMag - Curiosity begins long trek to uncover Red Planet's secrets - the rover has begun a multi-month journey to Mount Sharp, where it will dig in to find signs of past life.

ahomeschool.wikispaces Activities for Learning the Elements Glossary of Chemistry Terms Lab Equipment Chemical Substitutions What is Matter?Matters Changing State collect space space history and space artifacts news Long before the first Instagram from space, the first check-in from orbit, or even the first astronaut's tweet, John Glenn sent an email to Bill Clinton. The reply it prompted was the very first email transmitted by a sitting U.S. president — it just happened to be to space. April 18, 2014SpaceX launches science-packed Dragon capsule on space station supply run A commercial cargo spacecraft loaded with more than two tons of scientific experiments and equipment lifted off for the International Space Station on April 18, after more than a month of delays. SpaceX's Dragon launched on a Falcon 9 rocket from Cape Canaveral. April 17, 2014John Houbolt, NASA engineer who fought for Apollo moon landing method, dies

12 Snazzy Educational YouTube Channels If a picture is worth a thousand words, videos must be priceless, making YouTube an invaluable educational tool. Here are 12 of the snazziest educational YouTube channels I’ve come across. Click on the image to be taken to the YouTube channel. Please share any others you’ve found and loved in the comments! Animal Planet HD 2015 Universe Today — Space and astronomy news The Falcon 9 and Dragon capsule stand ready for launch prior to the detection of a helium leak in one of the engines forcing a scrub of the launch attempt on April 14. 2014 – now reset to April 18, 2014. Credit: nasatech.net NASA and SpaceX are marching forward towards a Friday, April 18 liftoff attempt for the Falcon 9 rocket sending a commercial Dragon cargo craft on the company’s third resupply mission to the International Space Station following the scrubbed launch attempt on Monday, April 14 – forced by the discovery of a Helium gas leak inside the rocket during the latter stages of the countdown. An on time blastoff of the upgraded Falcon 9 sets the stage for an Easter Sunday rendezvous and berthing of the Dragon resupply spacecraft at the massive orbiting outpost packed with almost 5000 pounds of science experiments and supplies for the six person crew. However the weather prognosis is rather [click to continue…] The newly-confirmed extrasolar planet has been dubbed Kepler-186f.

Lesson Plans Chapter 1: Matter—Solids, Liquids, and Gases Students are introduced to the idea that matter is composed of atoms and molecules that are attracted to each other and in constant motion. Students explore the attractions and motion of atoms and molecules as they experiment with and observe the heating and cooling of a solid, liquid, and gas.