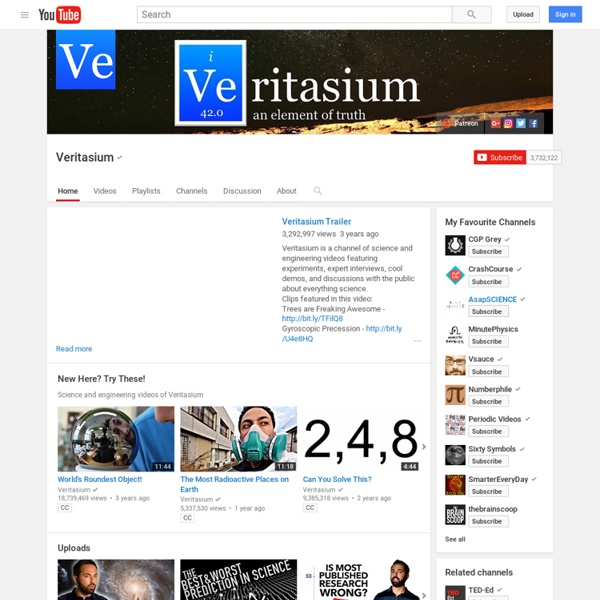 Here Comes Science - TMBW Here Comes Science is a children's CD/DVD set from They Might Be Giants, and is the third in their line of educational albums, following 2005's Here Come The ABCs and 2008's Here Come The 123s. It is the band's fourteenth studio album and fourth full-length children's album. Purchase[edit | edit source] Description[edit | edit source] Problem-Attic Gurn A man gurning A young woman playing Tinker Bell at Disneyland theme park inflates her cheeks and sticks her thumbs under her ears. Gurning man with an object in his ear A gurn or chuck is a distorted facial expression, and a verb to describe the action. The Golden Snitch! Ornament Tutorial Yup, I wore a hastily made clip-on felt Gryffindor tie to the premier of Harry Potter this year. This officially makes me a crafty dork, but it also means I had an uncontrollable urge to try making a Golden Snitch ornament for my tree. They turned out really nicely and I thought there might be one or two other crafty Potter fans out there who would like to know how to make one too.

mid0nz - BBC Sherlock's Books, Magazines & Newspapers Master List BBC Sherlock's Books, Magazines & Newspapers Master List This list is as accurate as possible as of 1/21/14.Please send additions, corrections, comments, questions, etc. to Abbreviation Key: The Plague The Plague (French: La Peste) is a novel by Albert Camus, published in 1947, that tells the story of medical workers finding solidarity in their labour as the Algerian city of Oran is swept by a plague. It asks a number of questions relating to the nature of destiny and the human condition. The characters in the book, ranging from doctors to vacationers to fugitives, all help to show the effects the plague has on a populace. The novel is believed to be based on the cholera epidemic that killed a large percentage of Oran's population in 1849 following French colonization, but the novel is placed in the 1940s.[1] Oran and its environs were struck by disease multiple times before Camus published this novel.

A Canticle for Leibowitz A Canticle for Leibowitz is a post-apocalyptic science fiction novel by American writer Walter M. Miller, Jr., first published in 1960. Set in a Catholic monastery in the desert of the Southwestern United States after a devastating nuclear war, the story spans thousands of years as civilization rebuilds itself. Level 7 (novel) Level 7 is a 1959 science fiction novel by the American writer Mordecai Roshwald. It is told from the first person perspective (diary) of a modern soldier X-127 living in the underground military complex Level 7, where he is expected to reside permanently, fulfilling the role of commanding his nation's nuclear weapons.[1] During his forced residence in a deep underground offensive-warfare complex, X-127 is ordered to push the bomb buttons to begin World War III (which lasts a total of 2 hours and 58 minutes). From that point, humanity's few civilian survivors move from the surface of the earth to a collection of underground shelter complexes on Levels 1 through 5, while military personnel already occupy the deepest and safest Levels 6 and 7. It later emerges that the orders given have been wholly automatic due to a launch on warning strategy,[2] and the war has taken place as a series of electronic responses to an initial accident.

Double-O-Who? Jon Pertwee's secret life as a wartime agent... years before he did battle with the Daleks Actor was an intelligence agent in WWII and reported to Winston ChurchillRevelations were made in a long-lost tape-recorded interview By Marc Horne Published: 23:39 GMT, 23 February 2013 | Updated: 23:40 GMT, 23 February 2013 He was best known for battling the Daleks as one of the best-loved Doctor Whos. Freakonomics Which is more dangerous, a gun or a swimming pool? What do schoolteachers and sumo wrestlers have in common? Why do drug dealers still live with their moms? How much do parents really matter? 10 Great Science Fiction Novels with Go-Back-To-Bed Depressing Endings Kinja is in read-only mode. We are working to restore service. "In his quest he accidently unleashes monsters, slake moths, onto the city of Bas-Lag" Should be "city of New Crobuzon". Bas-Lag is the name of the planet. Great list :)