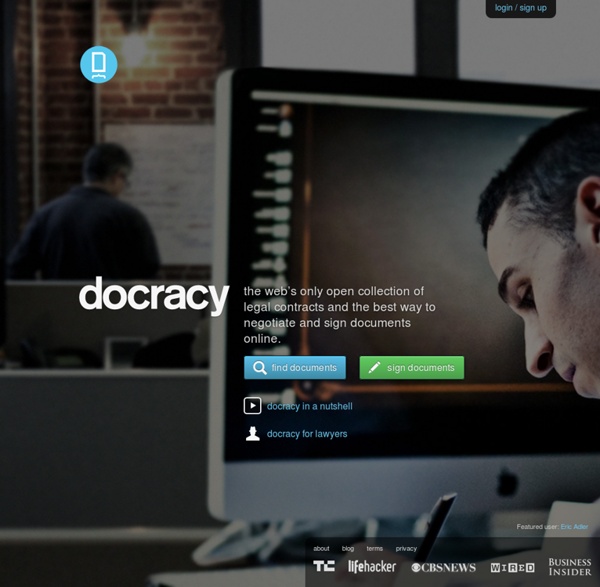 No Idea Left Behind: 25 Tools for Capturing Ideas Anywhere As a serial entrepreneur, I’m addicted to ideas. I feed off of ’em. And nothing makes me more upset than having a great idea… and losing it. Ideas never happen at opportune times, and having the proper idea capture tools can make sure that you’ll capture all your ideas for later processing. The problem with ideas is that they’re situational.

The 8 Most Unexpected Advantages of Anxiety Anxiety can be crippling, but psychology studies find it does have some unexpected upsides. Anxiety can be crippling, but sometimes it is a crucial part of getting the best out of yourself. Artists, comedians, athletes and other performers often talk about the right amount of anxiety and how it can improve creativity and performance. But anxiety also has a number of lesser known upsides… 1. People will trust you more HyperLoop One month before Hyperloop One ushered a pack of cynical journalists to see the first-ever demonstration of a Hyperloop mag-lev train in the desert outside Las Vegas, it didn’t exist. “We said ‘It’ll be May 10,” and we picked a day,” CEO Rob Lloyd confessed. “And three weeks ago, it wasn’t done.” Sure, the world-class engineers had the science down, developed a reliable propulsion system, and ran the numbers, but physical testing? Not quite yet.

Word perfect: how to become a freelance writer There are more graduates than ever entering an increasingly diminished job market. With opportunities in the arts and media as scarce as they've ever been, graduates are having to be more creative in the ways they earn money and gain experience in their chosen field. Although for many, freelancing is synonymous with living in your pyjamas and rejoicing you're not stuck in a 9-5 job, this wears off pretty swiftly, usually around rent day. However, for those with a flair for the written word, freelance writing can be worthwhile. Everyone's path to getting freelance work is different, but as long as it leads to money in the bank, they're all just as viable. Helping Start-Ups With Local Support and National Networks Daniel Rosenbaum for The New York TimesWill Fuentes, the founder of Lemur Retail, found potential clients through the Startup America Partnership, which has nearly 12,000 members affiliated with initiatives in 30 states. When Will Fuentes planned an extended business trip to Seattle last year, he tapped into the local chapter of a national networking group there. Within hours, Mr. Fuentes, who founded the Arlington, Va., software company Lemur Retail, had secured a work space, introductions and even restaurant recommendations via the group, the Startup America Partnership.“Before I flew out there, I already had five or six meetings set up with potential clients and other key contacts, as well as one potential acquirer,” Mr.

A Geek's Guide to Budgeting Hobbies A professor once told me his trick to happiness: treat your hobby like a career, but more important. Those of us who eat up all types of hobbies—from comics to video games to DIY projects—know that a good hobby can be one of the most enriching parts of life, but they can also require a lot of time and money. Here's how to better budget that time and money.P

4 Surprising Advantages of Being Depressed Why being depressed can sometimes be necessary, even beneficial. Depression can be an adaptive way of dealing with certain problems in life, such as relationship breakdown and illness, say the authors of a new study. While clinical depression is a serious mental health issue, the researchers argue that by examining how depression might have originally arisen, we can better understand how to treat it. Dr. What is Affiliate Marketing Let's face it: technology, especially the internet, can be pretty daunting to try to grasp, and with terms like malware, cursor and spam, it also seems pretty dangerous. So kudos to the guys who decided e-commerce and affiliate marketing should rely on an innocuous technology called a "cookie." A cookie is a technology that works with web browsers to store information like user preferences, login or registration information, and shopping cart contents. Have you ever opted-in to have a website "remember" your password and username for one of your online accounts?

To Become a Successful Freelance Writer, Start Here Far and away the question I get most often on this blog is how to get started as a freelance writer. There are so many things you could do first off. Which is the right one? But here’s what troubles me: Often, a year or two later, I’ll get that very same writer popping up with the same question. “Gee, if only I could figure out the one best, fastest, low-cost way to get started.”

How To Turn Character Flaws Into Strengths With One Easy Mental Trick An easy mental trick to turn poor personality traits to your advantage. Believing that a negative personality trait has a positive ‘silver lining’ is enough to boost performance in that area, a new study finds. For example, a person who is very pessimistic might believe that one positive side of this ‘negative’ personality trait is that it makes them more realistic. The study, published in the Journal of Experimental Social Psychology, found that those who mentally endorsed the idea that being impulsive was linked to greater creativity, were actually more creative on a subsequent test (Wesnousky et al., 2014).