How to Determine If A Controversial Statement Is Scientifically True 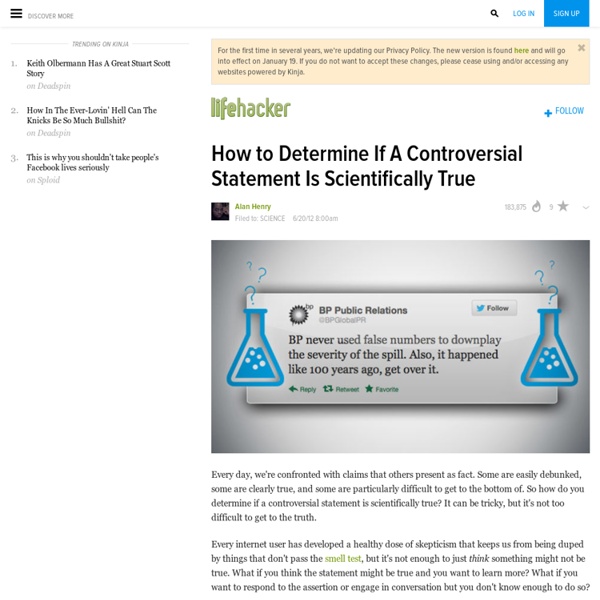 A small typo: "...Dr. Plait warned that [t]here are a few things to watch out for...". Great article overall, though I wonder if it advocates leaning on authority figures a bit too much. I think it's fairly obvious that the evidence itself is more important than whoever presents it, but I wish this were stated more explicitly. It can be next to impossible for laypeople to determine the difference between "legitimate" experts and their counterparts (and in some fields "legitimacy" may be ill-defined to the point of meaninglessness, and even experts aren't *always* right). The ability to judge data on its own merits (using questions like "was the study double blind?" Flagged Thanks for the correction - and excellent points, thank you!

How to Understand Everything (and why) — Metamodern Too much to know, lots to know about In science and technology, there is a broad and integrative kind of knowledge that can be learned, but isn’t taught. It’s important, though, because it makes creative work more productive and makes costly blunders less likely. Formal education in science and engineering centers on teaching facts and problem-solving skills in a series of narrow topics. It is true that a few topics, although narrow in content, have such broad application that they are themselves integrative: These include (at a bare minimum) substantial chunks of mathematics and the basics of classical mechanics and electromagnetism, with the basics of thermodynamics and quantum mechanics close behind.

Einstein for Everyone Einstein for Everyone Nullarbor Press 2007revisions 2008, 2010, 2011, 2012, 2013 Copyright 2007, 2008, 2010, 2011, 2012, 2013 John D. Norton Published by Nullarbor Press, 500 Fifth Avenue, Pittsburgh, Pennsylvania 15260 with offices in Liberty Ave., Pittsburgh, Pennsylvania, 15222 Implicit memory Evidence and current research[edit] Advanced studies of implicit memory began only a few decades ago. Many of these studies focus on the effect of implicit memory known as priming.[1] Several studies have been performed that confirm the existence of a separate entity which is implicit memory. In one such experiment, participants were asked to listen to several songs and decide if they were familiar with the song or not.

thinking tools resources Weak versus Strong Critical Thinking Critical thinking involves basic intellectual skills, but these skills can be used to serve two incompatible ends: self-centeredness or fair-mindedness. As we develop the basic intellectual skills that critical thinking entails, we can begin to use those skills in a selfish or in a fair-minded way. In other words, we can develop in such a way that we learn to see mistakes in our own thinking, as well as the thinking of others. Or we can merely develop some proficiency in making our opponent's thinking look bad. Typically, people see mistakes in other's thinking without being able to credit the strengths in those opposing views. Alice in Quantumland: A Charming Illustrated Allegory of Quantum Mechanics by a CERN Physicist by Maria Popova Down the rabbit hole of antimatter, or how to believe six impossible things about gender stereotypes before breakfast. As a lover of science and of all things Alice in Wonderland, imagine my delight at discovering Alice in Quantumland: An Allegory of Quantum Physics (public library) — an imaginative and unusual 1995 quantum primer by particle physicist Robert Gilmore, who has under his belt experience at Stanford and CERN. Besides the clever concept, two things make the book especially remarkable: It flies in the face of gender stereotypes with a female protagonist who sets out to make sense of some of the most intense science of all time, and it features Gilmore’s own magnificent illustrations for a perfect intersection of art and science, true to recent research indicating that history’s most successful scientists also dabbled in the arts. Gilmore writes in the preface: In the first half of the twentieth century, our understanding in the Universe was turned upside down.

A Mini Guide to Critical Thinking of a sequence of words is determined by its grammatical properties andthe meanings that are conventionally assigned to those words. The literalmeaning of a statement should be distinguished from its conversationalimplicature - the information that is implicitly conveyed in a particular conversational context, distinct from the literal meaning of the statement.For example, suppose we ask Lily whether she wants to go to the cinemaand she replies, "I am very tired." Naturally we would infer that Lily doesnot want to go to the cinema. But this is not part of the literal meaning of what is said. Newton's Laws of Motion The motion of an aircraft through the air can be explained and described by physical principals discovered over 300 years ago by Sir Isaac Newton. Newton worked in many areas of mathematics and physics. He developed the theories of gravitation in 1666, when he was only 23 years old.