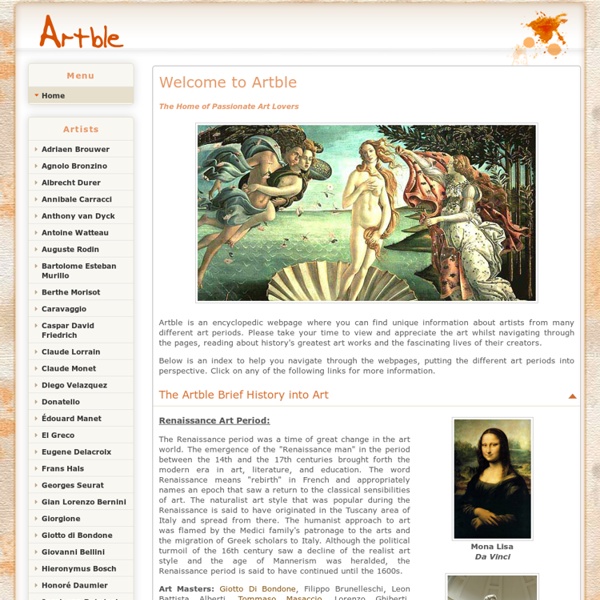 Camille Pissarro: Wikipedia Camille Pissarro (French: [kamij pisaʁo]; 10 July 1830 – 13 November 1903) was a Danish-French Impressionist and Neo-Impressionist painter born on the island of St Thomas (now in the US Virgin Islands, but then in the Danish West Indies). His importance resides in his contributions to both Impressionism and Post-Impressionism. Pissarro studied from great forerunners, including Gustave Courbet and Jean-Baptiste-Camille Corot. He later studied and worked alongside Georges Seurat and Paul Signac when he took on the Neo-Impressionist style at the age of 54. In 1873 he helped establish a collective society of fifteen aspiring artists, becoming the "pivotal" figure in holding the group together and encouraging the other members. Art historian John Rewald called Pissarro the "dean of the Impressionist painters", not only because he was the oldest of the group, but also "by virtue of his wisdom and his balanced, kind, and warmhearted personality".[1] Cézanne said "he was a father for me.

Frederic Edwin Church A dog Frederic Edwin Church (May 4, 1826 – April 7, 1900) was an American landscape painter born in Hartford, Connecticut. He was a central figure in the Hudson River School of American landscape painters. While committed to the natural sciences, he was "always concerned with including a spiritual dimension in his works."[1] Biography[edit] Beginnings[edit] Style[edit] Church was the product of the second generation of the Hudson River School and the only pupil of Thomas Cole, the school’s founder. Career[edit] Church began his career by painting classic Hudson River School scenes of New York and New England, but by 1850, he had settled in New York. In this way, Church pays a unique tribute to Humboldt (who inspired his journey) as well as maintains his Hudson River School roots. The Metropolitan Museum of Art in New York City exhibited The Heart of the Andes in it's original frame in 1995-96, together with a number of the supporting studies that Church made on his epic Andean journey.

Hudson River School artists Besides the artists listed below, many women artists were associated with the Hudson River School. Included in this list are the following: Susie M. Barstow, an avid mountain-climber who painted the mountain scenery of the Catskills and the White Mountains; Eliza Pratt Greatorex, an Irish-born painter who was the first woman elected to the National Academy of Design; Julie Hart Beers, who led sketching expeditions in the Hudson Valley region before moving to a New York City art studio with her daughters; Harriet Cany Peale, who studied with then married fellow painter Rembrandt Peale; and Mary Blood Mellen, a student and collaborator with the luminist Fitz H. List[edit] References[edit]