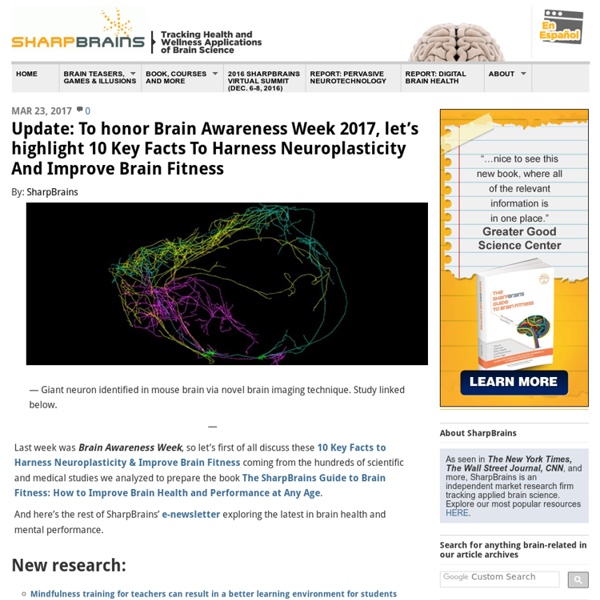 Where is The Mind?: Science gets puzzled and almost admits a non-local mentalscape. This will be the last "home-produced" blog entry for a while [save the short "Everyday Spirituality" which will follow it as a sign-off] . West Virginia beckons tomorrow morning and off I will go to whatever that entails. As I said in one of the commentary responses the other day, I hope that reading two journal runs "cover-to-cover" will bring up a few thoughts worth sharing. This day's entry was inspired by two articles bumped into coincidentally which had scientists puzzling about a holographic universe and a non-local mind. The 20 Things You Need To Let Go To Be Happy Everyone has one common goal in life: to achieve true happiness. The biggest factor holding us back from achieving our dreams is, simply and sadly, our own selves. We put limitations on ourselves everyday, whether intentionally or unintentionally.

Neurotechnology Neurotechnology is any technology that has a fundamental influence on how people understand the brain and various aspects of consciousness, thought, and higher order activities in the brain. It also includes technologies that are designed to improve and repair brain function and allow researchers and clinicians to visualize the brain. Background[edit]

An Easy Way to Increase Creativity Creativity is commonly thought of as a personality trait that resides within the individual. We count on creative people to produce the songs, movies, and books we love; to invent the new gadgets that can change our lives; and to discover the new scientific theories and philosophies that can change the way we view the world. Over the past several years, however, social psychologists have discovered that creativity is not only a characteristic of the individual, but may also change depending on the situation and context.

uld a mind-reading machine soon be a reality? Scientists 'decode' human brainwaves By Daily Mail Reporter Updated: 08:37 GMT, 18 May 2011 A 'mind-reading machine' that can display mental images is a step closer after scientists decoded brain signals related to vision, it was claimed today. Researchers from the University of Glasgow showed six volunteers images of people's faces displaying different emotions such as happiness, fear and surprise.

25 Things You Keep In Your Life That Are Only Holding You Back 1. The phone numbers of people that never, ever call you or text you first, and often don’t even respond when you text them. 2. Mean or uncomfortable exchanges with people — either in your text or internet history — that you occasionally go over and re-read because they make you feel angry and terrible all over again. Wendy Davis: Helping manufacturers bring energy-saving lighting to consumers Nearly 2,000 tiny lights shine from the ceiling of Wendy Davis' Maryland laboratory, allowing the "vision scientist" to come up with measurements for energy saving lighting for homes and businesses. The Vision Science laboratory that Davis established and leads at the National Institute of Standards and Technology (NIST) -- the only one of its kind in the world -- runs experiments with LEDs or light-emitting diodes, now used in traffic signals, nightlights and backpackers' headlamps. LEDs, a type of solid-state lighting, last much longer than other lights and many people are interested in expanding the market for their use. Nearly 12 percent of the electricity consumed in the United States goes to powering lights in people's homes and 25 percent is used in commercial buildings, according to the Department of Energy.

Thinkertoys’ 10 Tips to Become an Idea Person In an age where new ideas quickly becomes commodity, creativity is a must. It is creativity that continuously give us new ideas to keep us ahead in the competition. Regarding this, I recently found an interesting book: Thinkertoys by Michael Michalko. This book contains a lot of actionable ideas on how to become an idea person and get our creative juice flow.

Related:  Memory Improvment • Psychology 102
Related:  `test 1016   -  The Horror that We can somehow become   -  Brain Plasticity; Ways to change you   -  Get smarter   -  How to become a freelance reporter? 10 resources   -  Smarter Content   -  How to become a personal development coach   -  Smarter Balanced Digital Library   -  My Phone is Smarter That I AM   -  Study Guides and Strategies   -  Brainz — Learn something new today.   -  Welcome to Less Wrong   -  elephant journal: Yoga, Sustainability, Politics, Spirituality.   -  120 Ways to Boost Your Brain Power   -  The International Phonetic Alphabet - Audio Illustrations   -  Home Page   -  Personal Development - Freestyle Mind   -  Zap of electricity makes you a brighter spark - Telegraph   -  Scientific Learning Global   -  Math Run - Mathgame - how fast are your Math skills? A simple Math Training Game for everyone   -  Oscillatory Thoughts: The neuroscientific study of hallucinogens   -  Embodied Cognition [Internet Encyclopedia of Philosophy]   -  Out of Our Brains - NYTimes.com - NYTimes.com   -  The Extended Mind   -  Paste the text you want to speed read   -  10 Websites With Fun Tests To Gauge Your IQ   -  Imaginary Foundation   -  Drunkest Guy Ever Goes for More Beer Video - Video   -  10 Ways Our Minds Warp Time — PsyBlog   -  How to Become A Social Badass | High Existence   -  Psst! The Human Brain Is Wired For Gossip : NPR   -  Alison Gopnik: What do babies think? | Video on TED.com   -  Michael Shermer: The pattern behind self-deception | Video on TED.com   -  Is Neuroscience the Death of Free Will? - NYTimes.com - NYTimes.com   -  28 Ways to Stop Complicating Your Life   -  Low IQ & Conservative Beliefs Linked to Prejudice | Racism, Bias & Politics | Right-Wing and Left-Wing Ideology   -  This Will Make You Smarter: 151 Big Thinkers Each Pick a Concept to Enhance Your Cognitive Toolkit | Brain Pickings   -  BBC News - The man who hears colour