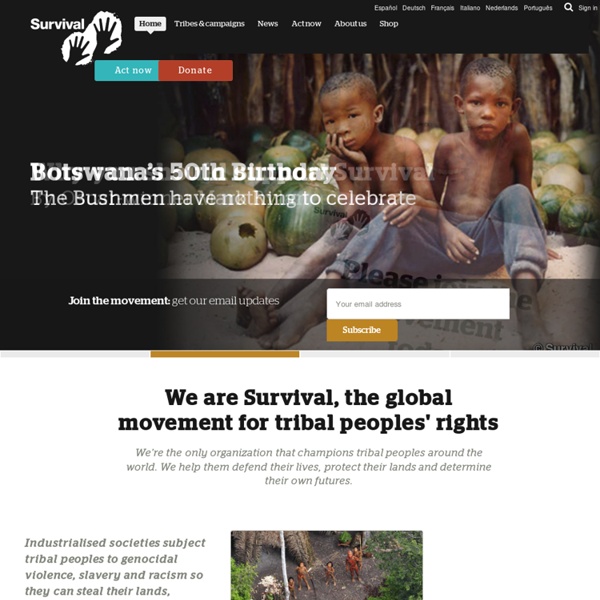 Indigenous languages must feature more in science communication There is no denying that English is one of the world’s major languages. It’s the mother tongue of nearly 370 million people. English is also very frequently used by scientists in academic journals and book chapters, along with other common languages like French, Spanish and Portuguese. But what about the billions of people who speak very little English, or none at all? How can we improve their access to scientific information and knowledge? In a bid to tackle this issue, along with other factors of marginalisation such as distance from urban areas and ethnic exclusion, we and our colleagues created the Imagine Project at the Federal University of Santa Catarina in Brazil.

Patents on Life Dolly sheep protest against patents on life at office for European patents. Patents are government guarantees that provide an inventor with exclusive rights to use, sell or manufacture an invention for a set period of time. A patent is usually granted for 20 years. Patents should be granted only to human inventions, not discoveries. Existing living organisms - plants and animals as well as their genes - are no-one's invention and should therefore never be patented and put under private control. However, over the past decades patents on plants and animals as well as genes and parts of human bodies have been repeatedly granted by the patent offices of industrialised countries. International Development Jobs with NGOs Charities Sustainable Agriculture & Gender Adviser Oxfam GBLocation: Oxfordshire, UKSalary/benefits: £36,830 - £46,260Application closing date: May 12, 2014 Project Manager, Project Management Unit HTSPELocation: Hertfordshire, UKSalary/benefits: £18,500 - £25,000Application closing date: Apr 23, 2014 Paid interns

Indigenous peoples - in pictures 2 clicks Survival International, the global movement for tribal peoples’ rights, has held its first photographic competition to mark its 45th anniversary. The photographs give an insight into the diversity and unique ways of life of tribal and indigenous peoples around the world, featuring the long-distance running Tarahumara in Mexico, the bull-jumping Hamar in Ethiopia, and the mountain-dwelling Igorot in the Philippines. Survival’s We, The People Calendar 2015 is available here.

Humanity Healing International is a humanitarian, nondenominational, nonpolitical organization promoting Spiritual Activism as a means to foster Healing for communities with little or no Hope. Once social change begins, it cannot be reversed. You cannot un-educate the person who has learned to read. You cannot humiliate the person who feels pride. Mission Statement Founded in March 1997, Indigenous People is a non-profit cultural education organisation based in Brixton, South London. They aim to raise awareness of the principles of sustainable development and community regeneration, a product of the Rio Earth Summit of 1992, which calls for the regeneration of local communities to act as vehicles for the protection of the natural environment and guarantors of sustainable social and economic development. Fostering Social Cohesion Engendering social cohesion through common values, beliefs and traditions, it is the vital importance of local culture as the basis of local community that Indigenous People seek to emphasise. Their educational work therefore aims to encourage people, particularly the young, to take a more active role in the production of local art and culture, rather than remaining passive consumers of what is fed to them by the mass media.

The Greeks really do have near-mythical origins, ancient DNA reveals Ever since the days of Homer, Greeks have long idealized their Mycenaean “ancestors” in epic poems and classic tragedies that glorify the exploits of Odysseus, King Agamemnon, and other heroes who went in and out of favor with the Greek gods. Although these Mycenaeans were fictitious, scholars have debated whether today’s Greeks descend from the actual Mycenaeans, who created a famous civilization that dominated mainland Greece and the Aegean Sea from about 1600 B.C.E. to 1200 B.C.E., or whether the ancient Mycenaeans simply vanished from the region. Now, ancient DNA suggests that living Greeks are indeed the descendants of Mycenaeans, with only a small proportion of DNA from later migrations to Greece. And the Mycenaeans themselves were closely related to the earlier Minoans, the study reveals, another great civilization that flourished on the island of Crete from 2600 B.C.E. to 1400 B.C.E.

'Honour'-based violence Heshu Yunes ‘Honour’-based violence and ‘honour’ killings are a form of violence against women which currently occur predominantly amongst populations from the Middle East and South Asia, although they may occur in other areas, and historically have been recorded in Southern Europe. ‘Honour’ works to restrict women’s autonomy, particularly sexual autonomy within male-dominated societies which place a high value on women’s chastity. Within ‘honour’ crimes, families may collaborate to commit violence against a relative who is thought to have violated the restrictions around female behaviour. Such violations might include dress or make-up which is not approved by the family, resisting an arranged marriage, seeking divorce, reporting domestic violence, although some so-called offences may appear trivial. Links

OneWorld: where the good guys gang up Home About Our work Team A Visual Ethnography of the World’s Last Nomadic Peoples 2 clicks By Maria Popova What is it about Dutch photographers that makes them so visually eloquent at capturing the human condition? From Jeroen Toirkens comes Nomad (public library) — a fascinating and strikingly beautiful visual anthropology of the Northern Hemisphere’s last living nomadic peoples, from Greenland to Turkey. A decade in the making, this multi-continent journey unfolds in 150 black-and-white and full-color photos that reveal what feels like an alternate reality of a life often harsh, sometimes poetic, devoid of many of our modern luxuries and basic givens, from shiny digital gadgets to a permanent roof over one’s head. Since the beginning of time, nomadic people have roamed the earth. Looking for food, feeding their cattle.