The Institute for Social Ecology 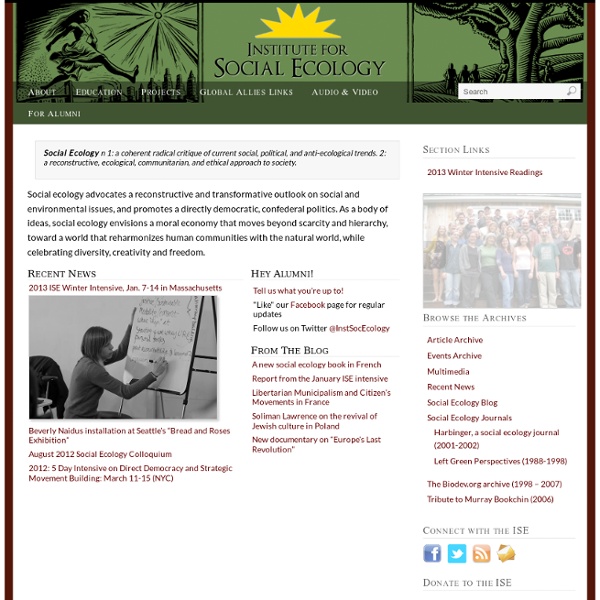 Frontiers in Ecology and the Environment Social Ecology London | Study/Action Group meeting ervy other week in Whitechapel. Urban Ecology | Mission Mission statement Vibrant neighborhoods are the building blocks of healthy cities and thriving regions. Urban Ecology uses urban design, land use planning, and policy reform to help communities plan and build neighborhoods that are ecologically healthy, socially just, and economically fair. Our mission Founded in 1975, Urban Ecology strives to create neighborhoods that are thriving, healthy places to live. We specialize in participatory land use planning that creates a common vision for change and policy advocacy that turns a community’s vision into reality. While the San Francisco Bay Area has many nonprofits that advocate for neighborhood revitalization and regional sustainability, Urban Ecology is the only one that operates at both levels simultaneously. We are hands-on in neighborhoods, offering technical assistance with streetscape design, architectural services, and land use planning.

About This Blog Natural Economics Natural economics is the study of post-scarcity economics. Though commonly defined as an economy where all goods are free and abundant, natural economics specifies a slightly different definition. “Post-scarcity” in this context is the absence of “scarcity” as defined by mainstream economics, which, according to them, is “the problem of having seemingly unlimited wants in a world of limited resources“. Unlike other treatments of post-scarcity, like the organizations advocating resource-based economies, or the highly-optimistic Kurzweillians, natural economics aims from the start to have both a strong foundation for actual implementation, a rigorous base of empirical support to hold up its claims, and a grounded, realistic view of the future. History Sometime in 2010 I watched Zeitgeist: Moving Forward and became interested in The Venus Project and the idea of a resource-based economy. I had inadvertently created my own field study. Like this: Like Loading...

Civic Ecology Lab, Cornell University Post-scarcity - AdCiv In a sentence: by increasing the amount and quality of physical goods (through automation) via freely available open-source channels, until it makes no sense for anyone to rely on anything else. The transition beyond our current institutions to post-scarcity, due to social and political reasons, may though be harder than actually developing the technologies required to support a technological post-scarcity. However some form of true post-scarcity - perhaps regulated at the personal consumption level unless agreed at a community/regional level for larger projects - where all people on Earth do not have to work for pay, or any kind of exchange, and have a very high standard of living does appear possible on the face of it. The Earth's crust contains quintillions of tonnes of useful elements; energy is plentiful (solar, geothermal, nuclear) and automation of everything significant including the fabrication of other automated systems is likely to be within mankind's capabilities.

The Society for Human Ecology Post-Scarcity Does Not Mean Post-Work | Econ201 by Daniel Altman Does the rise of the robots doom us all to unemployment? The answer is most certainly no. Provocative claims that the United States has reached “peak jobs” and will soon be a “post-scarcity economy” neglect an essential part of the reason why we work. By now you’ve probably heard the argument that robots won’t do away with jobs because we’ll use them to do better jobs. But if robots are exceptionally good at their jobs, and we can use them to make just about everything, then another argument suggests that we won’t actually need to work. The problem with these predictions is that providing for basic needs is not the only thing that compels us to work. It’s surprising that this simple observation has eluded the post-scarcity futurists. For instance, Google encourages its employees to spend one day a week on their own projects.

Resurrecting the Dodo and Other Extinct Creatures" Though some experts contend that it will never be possible, a great debate is underway in science about whether it's ethical to bring an extinct species back to life. Some animals are driven to extinction by human action, but others simply can't survive in their natural habitat or because of a major change in climate. Earth has gone through several mass extinctions, and bringing back many of these creatures could throw the world's ecosystem into chaos. There's the question of where these creatures would go, especially since many extinct creatures would have no natural predators, except for humans. Would putting a saber-tooth tiger in the Siberian tundra disrupt the local food chain (in addition to terrorizing locals)? In July 2007, a very well preserved woolly mammoth carcass was discovered in Siberia, reinvigorating debate about trying to resurrect the species. Another possibility proposed for mammoths is to remove DNA from an elephant egg and fuse it with the cell of a mammoth.

Social ecology Social ecology is a critical social theory founded by Green author and activist Murray Bookchin. Conceptualized as a critique of current social, political, and anti-ecological trends, it espouses a reconstructive, ecological, communitarian, and ethical approach to society. Social ecology advocates a reconstructive and transformative outlook on social and environmental issues, and promotes a directly democratic, confederal politics. As a body of ideas, social ecology envisions a moral economy that moves beyond scarcity and hierarchy, toward a world that reharmonizes human communities with the natural world, while celebrating diversity, creativity and freedom. Social ecology suggests that the roots of current ecological and social problems can be traced to hierarchical (or more specifically kyriarchical) modes of social organization. Overview[edit] Social ecology locates the roots of the ecological crisis firmly in relations of hierarchy and domination between people. See also[edit]

Rare Breeds Survival Trust The Rare Breeds Survival Trust (RBST) is a conservation charity,[1] whose purpose is to secure the continued existence and viability of the United Kingdom’s native farm animal genetic resources (FAnGR). It was founded in 1973 to preserve native breeds, and since then no UK-native breed has become extinct. It maintains a watch list of the United Kingdom's rarest breeds of cattle, sheep, pigs, horses, goats and poultry,[2] and an approved list of farm parks.[3] Projects have included the collection of genetic material to ensure the future of rare breeds in a farm animal "gene bank". RBST supports the marketing of meat from rare breeds through the Traditional Breeds Meat Marketing Company, founded in 2003. Designated breeds[edit] Cattle[edit] Critical: Aberdeen Angus (Op)Chillingham CattleNorthern Dairy ShorthornVaynolWhitebred Shorthorn Endangered: Vulnerable: Lincoln Red At Risk: Minority: Other Native Breeds: Sheep[edit] Pigs[edit] British Saddleback Gloucestershire Old Spots Goats[edit] Bagot

Practical Action - technology challenging poverty | Practical Action Latin America In Peru and Bolivia, we help communities set up small-scale technological solutions in remote areas where there is no access to basic services, including electricity, heating, clean water and sanitation. Western Africa Building on our recent extension of consultancy work into west Africa, Practical Action has recently set up an office to deliver impact at scale in Francophone west Africa. Eastern Africa Our offices in Kenya and Sudan work with communities to develop practical solutions in energy, agriculture and urban water and waste, reducing the impact of conflict and disasters. Southern Africa Our Southern Africa office works primarily in Zimbabwe, Zambia, Malawi and Mozambique, with an emphasis on improving access to clean drinking water and better sanitation in urban slums, increasing the productivity of smallholders in arid regions, and increasing energy access in rural and urban areas. South Asia UK office