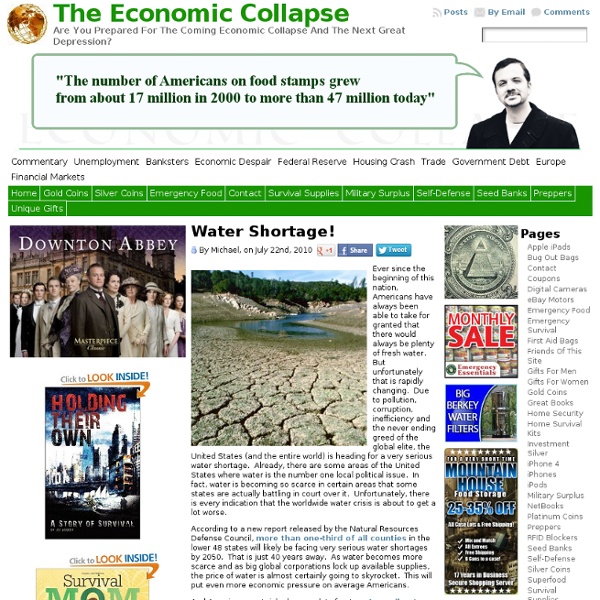 Ever since the beginning of this nation, Americans have always been able to take for granted that there would always be plenty of fresh water. But unfortunately that is rapidly changing. Due to pollution, corruption, inefficiency and the never ending greed of the global elite, the United States (and the entire world) is heading for a very serious water shortage. According to a new report released by the Natural Resources Defense Council, more than one-third of all counties in the lower 48 states will likely be facing very serious water shortages by 2050. And Americans certainly do use a lot of water. In fact, a five minute shower by an American uses more water than a typical person living in poverty in a developing country uses in an entire day. For hundreds of years, North America has been blessed with an overabundance of fresh water, but those supplies are quickly running dry. If the breadbasket of America were to dry up, what would that mean for the future of this nation? Why?

The Fact File » Your source of factual information on today's top issues. STAR Community Index — ICLEI Local Governments for Sustainability USA The STAR Community Index™ is a national, consensus-based rating system for community sustainability. STAR, now in beta release, provides communities with a standard and comprehensive set of goals, objectives and performance measures by which to improve interdependent environmental, economic, and social conditions. STAR is also a community of leading local governments creating more sustainable places for the long term. Visit the STAR Communities Website For the latest updates on STAR, visit the STAR Communities website at www.starcommunities.org. STAR Founding Partners ICLEI-Local Governments for Sustainability USA is proud to be a founding sponsor of STAR.

Stop the Canadian Oil Sand Madness Now Historically, surface mining has been used to extract tar sands and this method has produced at much CO2 as all the cars in Canada. The tailings, what are left when the bitumin has been extracted, are being stored in ponds. In the tailings pond, the sand, clay and water separate out. The water is sent back to the plant to be reused. Even so, the huge amounts of water needed threatens the world's third largest watershed. Mining is the oldest technique for removing the bitumin from oil sands. Between the ever increasing air pollution and the poisons and heavy metals built up in the tailing ponds that may now been seen from space, there has been a rise in certain cancers and syndromes since oil sand production ramped up in 2005.

India, Pakistan and the Snow Leopard: Javed Naqi Guest post by JAVED NAQI Photo Credit: Flickr User Tambako the Jaguar Amongst the lesser known casualties of the conflict between India and Pakistan is wild life. Kargil, a district in the state of Jammu and Kashmir is a remote, arid-cold and high altitude area. Since the district lies on the ceasefire line, the Line of Control, that marks the territorial divide between India and Pakistan, the region has witnessed the brutal brunt of Indo-Pak enmity. Natural habitat of the snow leopard Uncia uncia, the snow leopard, the world’s most elusive feline, is usually found in the mountains at elevations of 3,000 to over 5,000 m (10,000 – 17,000 feet). The Line of Control passes through the habitat of the snow leopard and other wildlife. For Kargil and Drass, the snow leopard is a symbol of the survival of life forms in a region with a harsh climate. Photo credit: Aishwarya Maheshwari/WWF-India (The author, a native of Kargil, is an Assistant Professor in Higher Education based in Srinagar.

Appropedia SAFSF.ORG :. Sustainable Agriculture &amp; Food Systems Funders Leopard attacks villagers in India – in pictures | World news A leopard strayed into Prakash Nagar village in India and mauled several people, including three guards, before being caught by forest officials. The animal, which suffered injuries caused by knives and batons, died later in the evening at a veterinary centre

Et tu, Mr. Destructo?: Game Over: Scans of Over 50 Ron Paul Newsletters For a certain segment of the Ron Paul fanbase, no evidence of his disseminating hateful, paranoid material will ever be enough. Citing James Kirchick's piece in wasn't sufficient, because Kirchick could have just been "making everything up." Then, when I and others posted copies of "," that too wasn't convincing. Well, now there are many documents. As I said in my rundown on the Paul platform over at Vice, reasonable fans of Dr. there's no way Paul could have been ignorant of the content [of] 8-12 page newsletters published under his name for over ten years. Further, you can't dismiss this in the name of higher political or socioeconomic aspirations. when you opt to support anti-imperialist and civil liberties ideals by supporting Paul the Candidate, you end up supporting everything else about him. It's fine to have convictions about things he believes in. And still, for the faithful, this will not be enough. Ron Paul Newsletter—April, 1993: The New York Bombing Dr. "Dr. "St.

Welcome to the Sustainability Knowledge Network — Sustainability Knowledge Network This leopard's death is a familiar tragedy | John Barker The attack by a leopard on up to six forest rangers in Siliguri in the Sikkim region of north-east India was a tragic result for both the people and animal victims of the conflict occurring between humans and wildlife. In this case it was a male leopard, a species that sometimes adapts to moving into semi-urban areas, that became cornered – and as the photos in the press clearly show, the animal was fighting for his survival as only such a big cat can. The tragedy of its death occurred in a situation where the forest guards were clearly attempting to safely stop it in its tracks. Human-wildlife conflict issues in India – and particularly in the northern areas of the country – are one of the daily concerns for so many rural communities. Elephants coming to feed on crops or just moving through a farmer's fields can decimate a farmer's annual crop in a single night, and predators such as leopards and tigers take valuable livestock.

Going organic hurts veggies, OK for legumes How could organic stuff not be better? Eschewing pesticides and fertilizers is better for consumers, farmers, the environment, and all the denizens of the ecosystems that comprise it—everyone knows that. Even ask Prince Charles. Yet, like many ideas that seem to be straightforward, this one turns out to be somewhat complex. If organic agriculture has lower yields, it will require more land to generate the same amount of calories as conventional farms. It will thus cause more deforestation and the loss of biodiversity that accompanies it—hardly environmental boons. As with any meta-analysis, they needed to make sure they were comparing apples to apples. In determining whether organic farming can match the yields of conventional farming, they concluded that… it depends. In contrast to conventional farms, when organic farms get more nitrogen, they do better.

Don DeBar's Blog Real Simple Recycling A to Z Each water bottle you recycle may seem like a drop in the bucket, but don't undervalue your efforts. America is recycling nearly 33 percent of its waste -- almost twice as much as 15 years ago. But sometimes it can be tough to tell what can go in the bin, what can't and what your recycling center does and does not accept. To help you navigate the often murky recycling waters, check out Real Simple magazine's A to Z guide to recycling. These tips were first published in the September and October issues of Real Simple and written by Natalie Ermann Russell. For more tips like these, a new lifestyle makeover series called "Real Simple, Real Life," hosted by Kit Hoover, premieres on the television channel TLC on Oct. 17, at 8 p.m. AEROSOL CANS. ANTIPERSPIRANT AND DEODORANT STICKS. BACKPACKS. BATTERIES. BEACH BALLS. BOOKS. CARPETING (NYLON FIBER). CARS, JET SKIS, BOATS, TRAILERS, RVS AND MOTORCYCLES. CELL PHONES. Page 1 | 2 | 3 | 4 | 5 | 6 | 7 | 8