Synagogue Church of All Nations in Nigeria collapsed

SA checks if citizens were injured in Nigeria building collapse:Sunday 14 September 2014. Nigerian rescue services say 124 people have been rescued from the rubble of the collapsed building. 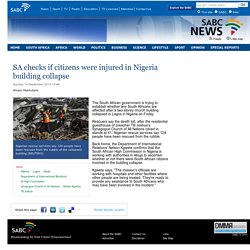 (REUTERS) The South African government is trying to establish whether any South Africans are affected after a two-storey church building collapsed in Lagos in Nigeria on Friday. Rescuers say the death toll, after the residential guesthouse of preacher TB Joshua's Synagogue Church of All Nations caved in, stands at 41. Nigerian rescue services say 124 people have been rescued from the rubble. Back home, the Department of International Relations' Nelson Kgwete confirms that the South African High Commission in Nigeria is working with authorities in Abuja to ascertain whether or not there were South African citizens involved in the building collapse. Kgwete says, "The mission's officials are working with hospitals and other facilities where other people are being treated. 67 South Africans confirmed dead after Nigeria church collapse. 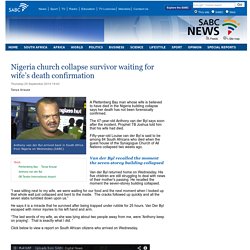 (SABC) A Plettenberg Bay man whose wife is believed to have died in the Nigeria building collapse says her death has not been forensically confirmed. The 47-year-old Anthony van der Byl says soon after the incident, Prophet TB Joshua told him that his wife had died. Fifty-year-old Louise van der Byl is said to be among 84 South Africans who died when the guest house of the Synagogue Church of All Nations collapsed two weeks ago. Van der Byl recalled the moment the seven-storey building collapsed Van der Byl returned home on Wednesday. “I was sitting next to my wife, we were waiting for our food and the next moment when I looked up that whole wall just collapsed and bent to the inside.

He says it is a miracle that he survived after being trapped under rubble for 25 hours. “The last words of my wife, as she was lying about two people away from me, were 'Anthony keep on praying'. Another 38 survivors of the Nigeria church tragedy arrived back in SA. Delays in ‘Nigerian repatriation’ stresses SA task team:Friday 7 November 2014. About 116 people were killed when the Synagogue Church of All Nations guest house collapsed on September 12, 2014. 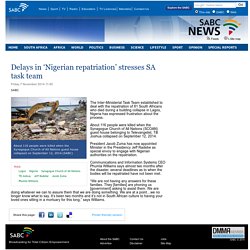 (SABC) The Inter-Ministerial Task Team established to deal with the repatriation of 81 South Africans who died during a building collapse in Lagos, Nigeria has expressed frustration about the process. About 116 people were killed when the Synagogue Church of All Nations (SCOAN) guest house belonging to Televangelist, TB Joshua collapsed on September 12, 2014. President Jacob Zuma has now appointed Minister in the Presidency Jeff Radebe as special envoy to engage with Nigerian authorities on the repatriation.

Communications and Information Systems CEO Phumla Williams says almost two months after the disaster, several deadlines as to when the bodies will be repatriated have not been met. “We are not having any answers for these families. Delay in repatriation of church tragedy victims. 54 Nigerian disaster victims’ bodies ready for SA:Thursday 13 November 2014. More than 80 South Africans were killed when TB Joshua's Synagogue Church of All Nations collapsed in Lagos. 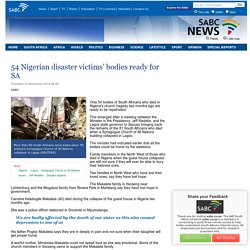 (REUTERS) Only 54 bodies of South Africans who died in Nigeria's church tragedy two months ago are ready to be repatriated. Nigeria tragedy: SA awaits arrival of victims remains:Sunday 16 November 2014. Eighty-one South Africans and four foreigners with South African documents were killed when the guesthouse in Lagos collapsed. 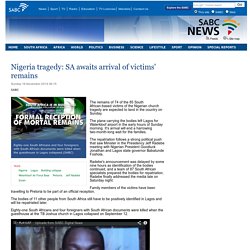 (SABC) The remains of 74 of the 85 South African-based victims of the Nigerian church tragedy are expected to land in the country on Sunday. The plane carrying the bodies left Lagos for Waterkloof airport in the early hours of Sunday morning. It's arrival will end a harrowing two-month-long wait for the families. The repatriation follows a strong political push that saw Minister in the Presidency Jeff Radebe meeting with Nigerian President Goodluck Jonathan and Lagos state governor Babatunde Foshola. Radebe's announcement was delayed by some nine hours as identification of the bodies continued, and a team of 87 South African specialists prepared the bodies for repatriation. Family members of the victims have been travelling to Pretoria to be part of an official reception. ‘Nigerian repatriation’ brings sombre mood to SA:Sunday 16 November 2014. The bodies will be transported from the Waterkloof airforce base to Forensic Pathology Services mortuaries in different provinces. 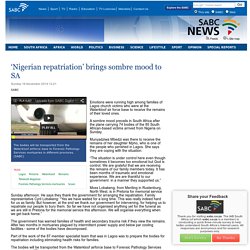 (SABC) Emotions were running high among families of Lagos church victims who were at the Waterkloof air force base to receive the remains of their loved ones. A sombre mood prevails in South Africa after the plane carrying 74 bodies of the 85 South African-based victims arrived from Nigeria on Sunday. Munyadziwa Mbedzi was there to receive the remains of her daughter Mpho, who is one of the people who perished in Lagos. She says they are coping with the situation. “The situation is under control here even though sometimes it becomes too emotional but God is control. Moss Lobakeng, from Meriting in Rustenburg, North West, is in Pretoria for memorial service Sunday afternoon. The remains of 74 victims of Lagos tragedy finally home. 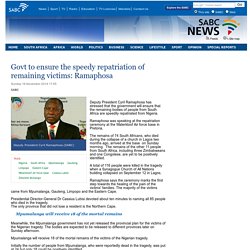