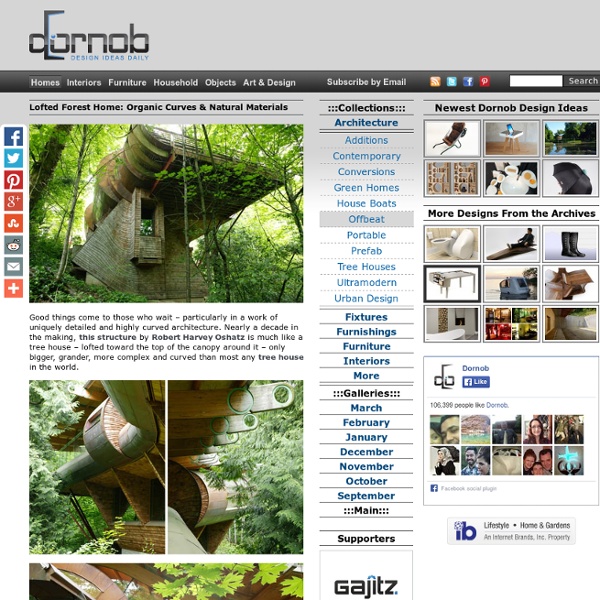 Good things come to those who wait – particularly in a work of uniquely detailed and highly curved architecture. Nearly a decade in the making, this structure by Robert Harvey Oshatz is much like a tree house – lofted toward the top of the canopy around it – only bigger, grander, more complex and curved than most any tree house in the world. The perimeter of the structure is pushed out into the forest around it, curving in and out to create views as well as a sense of intimacy with the coniferous and deciduous tree cover. The wood and metal detailing is incredible in its variety and customization – each piece designed to fit a particular form and function. Wood and stone carry naturalistic themes from the outside in and even the metal looks naturally rusted. The curved, organic mix of materials continues to the interior of this elevated forest home – a conceptual play on the fluidity and complexity of music (the source of inspiration for the architect and client in the design).

Custom Tree House Plans, DIY Ideas & Building Designs No, really: would you want to design, build and live in an real fantasy tree house all year round? More and more people have decided to do just that and where treehouses were once novelty architecture for kids they are now (almost) mainstream structures, as attested to by the pictures above via Bella Seven. Many modern tree house designs and home designers and custom builders take a site-specific approach and construct their tree buildings around not only views and rooms but also have to account for access and structural support in unique and novel ways. Some of the results are little auxiliary spaces intended for guests or vacations while others are fully developed tree homes with everything need for daily living.

design blog - DesignAddict: Save food from the refrigerator posted on November 26 by DesignAddict. Jihyun Ryou, Design Academy Eindhoven graduate, did his Master Thesis about food preservation. By accumulating traditional oral knowledge, he looked at a feasible way to bring the knowledge into everyday life. "Through the research about the current situation of food preservation, I’ve learned that we hand over the responsibility of taking care of food to the technology, refrigerator. We don’t observe the food any more and don’t understand how to treat it. Therefore my design looks at re-introducing and re-evaluating traditional oral knowledge of food, which is closer to nature. Marlins Park in Miami, Baseball’s Newest Stadium Lumbering and dizzyingly white in the Florida sun, the new Marlins Park is an elliptical concrete, steel and glass boulder looming above the low-rise houses and empty lots of the Little Havana neighborhood. With retail on the outside and a public plaza in front, it’s designed partly to gin up some street life. Economic development is supposed to follow — that was the rationale for the public financing that covered most of the $634 million project ($515 million for the park itself) and contributed to the recall of Miami-Dade County’s mayor. Cities are always building new stadiums with the justification that they’ll catalyze the local economy.

Hug Chair by Ilian Milinov A Chair for Clingy Lovers If you’ve ever had someone sit in your lap, you know that 15 minutes is about the max your legs can handle. It’s really not fair. The Hug chair brings simple design and human gesture together for that extra time you want to sit with your significant other. When you’re away from your special someone the extra seat doubles as a convenient space, perfect for catching up on video chat. Designer: Ilian Milinov The Great Geek Manual » The World’s Most Beautiful Libraries I make no secret of the fact that I’m a hardcore bibliophile, but we’re a common enough lot these day. And the one sight that always makes me linger over a webpage is rows and rows of neatly organized books. So, in an effort to draw more like-minded read here to my little blog, I decided to round-up a gallery of photos of some of the most beautiful libraries I’ve ever seen photos of. Enjoy. If you enjoy this gallery, make sure you check out our other list of The United States’ Most Beautiful Libraries! Abbey Library St.

Space Saving Tiny Apartment, New York This tiny but highly sophisticated studio apartment in the East Village of NYC has made us very proud, thanks to JPDA. Not only was it built as a super efficient multi-functional unit but with the use of detailed mill work, the storage capacity was very cleverly executed and resulted in a super stylish studio with a decent amount of floor space. Shouldn’t all NYC dwellers aim to live like this? You decide…

Bedroom Designs: Modern Interior Design Ideas & Photos Do you prefer plush padding a minimalist pillow, a decked-out design or toned-down interior? From dazzling abstract designs to humorously offbeat sleeping spaces here are seven brilliant bedroom designs to inspire your imagination. Who knows, with a few decorative adjusts you might be able to remodel your own bedrooms to similar effect.

Overlooked Feminist Architect Gets Her Due It was a cold January day in 2011 when I had last seen the Hotel Lafayette, the grand French Renaissance Revival styled brick that sits on the corner of Washington and Clinton Streets in downtown Buffalo, New York’s Lafayette Square. Built between 1901 and 1904, it was originally designed by Louise Blanchard Bethune (1856-1913), lead architect on the project with her firm Bethune, Bethune & Fuchs, which included her husband Robert Bethune and former apprentice William L. Fuchs. Louise Bethune carries the mantle of being the first woman in the United States to be recognized as a professional architect, with her inclusion in the Western Association of Architects in 1885, and then in 1888, when she became the first woman member of the American Institute of Architects (AIA) and then the first to become a Fellow, (FAIA), in 1889. Since Spring, 2010, the seven story dark red brick building with its distinctive white glazed terra cotta decorative trim had been closed for business.

Man decorates basement with $10 worth of Sharpie When Charlie Kratzer started on the basement art project in his south Lexington home, he was surrounded by walls painted a classic cream. Ten dollars of Magic Marker and Sharpie later, the place was black and cream and drawn all over. There are fictional detectives Hercule Poirot and Sherlock Holmes, Winston Churchill lounging with George Bernard Shaw — and the TV squirrel Rocky and his less adroit moose pal Bullwinkle. Says Kratzer of his cartoon of a cartoon: "You appreciate the cleverness more as an adult." There's Georges Seurat's Sunday Afternoon on the Island of La Grande Jatte. There is Blenheim Palace, the birthplace of Winston Churchill, and the Cornell Law School, of which Kratzer is an alumnus.