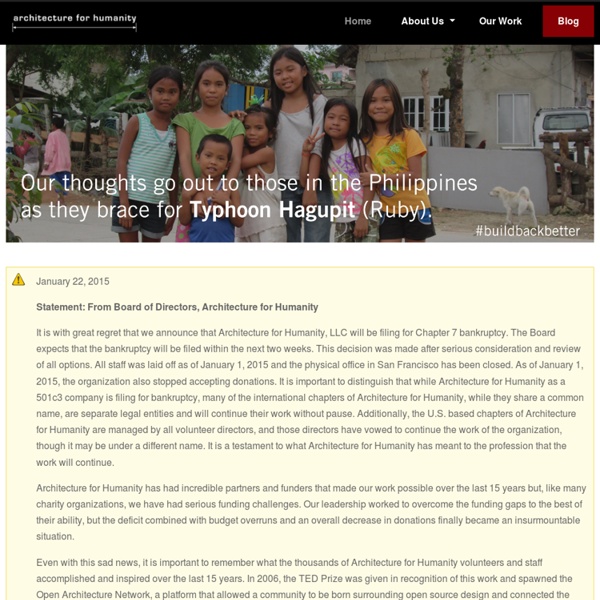 The ABC of Architects [VIDEO] What do you get when you take 26 of the most important architects and mix it with animation? The quirky ABC of Architects animated video by Federico Gonzalez and Andrea Stinga, of course. The video is an alphabetical list of notable architects with their most well-known building. They tried to feature a range of nationalities in the lot, but they had to leave a lot of great architects out since the list had to be narrowed to the number of letters in the alphabet. Concept and Animation: Federico Gonzalez and Andrea StingaArt Direction: Federico GonzalezMusic: The Butterfly by Eugene C.

Architecture Brunelleschi, in the building of the dome of Florence Cathedral in the early 15th-century, not only transformed the building and the city, but also the role and status of the architect.[1][2] Architecture (Latin architectura, after the Greek ἀρχιτέκτων – arkhitekton – from ἀρχι- "chief" and τέκτων "builder, carpenter, mason") is both the process and the product of planning, designing, and constructing buildings and other physical structures. Architectural works, in the material form of buildings, are often perceived as cultural symbols and as works of art. green architecture notes » Favela-Bairro project: Jorge Mario Jauregui Rio de Janiero Sustainable cities require sustainable communities as well as care for the environment. Brazilian architect, Jorge Mario Jauregui has been working in Rio de Janiero for the last fifteen years to use his skills as an architect to bring infrastructure and community facilities to the informal communities throughout the city known as favelas. Favelas, which house about 20% of the city’s population, have been growing in pockets of unclaimed land throughout the city for the past 100 years.

INFOGRAPHIC: Meet the Ultra-Efficient Homes of the Future Resources are dwindling, prices are rising, and energy efficiency has never been more important. Commercial buildings have long been designed with conservation in mind: Taiwan’s national stadium is covered almost entirely with solar panels, and the CaixaForum Museum in Madrid boasts a living wall of 15,000 plants. However, with the world’s population predicted to exceed 8 billion by 2050, architects are turning their green design skills to residential homes. Potential structures range from ancient mudbrick domes, to space-age Earthships. Some designs are more viable than others, but the Big Deal team have identified five of the most promising candidates.

2012 TED Prize Winner Announced! For the first time in history, the TED Prize winner is not an individual, but an idea that greatly impacts the future of planet Earth… and the winner is The City 2.0. The City 2.0 is the city of the future, a future in which more than ten billion people are dependent on. The idea is not a “sterile utopian dream” but rather a “real-world upgrade tapping into humanity’s collective wisdom.” More urban living space will be constructed over the next 90 years than all prior centuries combined, so it is time to get it right.

Residential Shipping Container Primer (RSCP™) Action It. Building a house is no small feet. Even a small one. There are thousands of materials, pieces, and tasks involved. Unless you are a builder or experienced it's intimidating. But, what containers as perfect modules allow you to do, is simplify the entire process. UKUMBI NGO Using architecture to mitigate poverty Ukumbi ry is a Finnish non-governmental organisation established in 2007 by three Finnish architects. Saija Hollmén, Jenni Reuter and Helena Sandman have all extensive experience of development cooperation projects in several African countries. In the course of their work they realised that culturally knowledgeable and skilfully designed architecture is a tool that can be used to improve the living conditions of communities and to mitigate poverty. The mission of Ukumbi is to offer architectural planning and design for underprivileged groups. Often such groups include women, children or young people whose opportunities for participation in society are limited.