Alchemy - Home of the weeHouse - 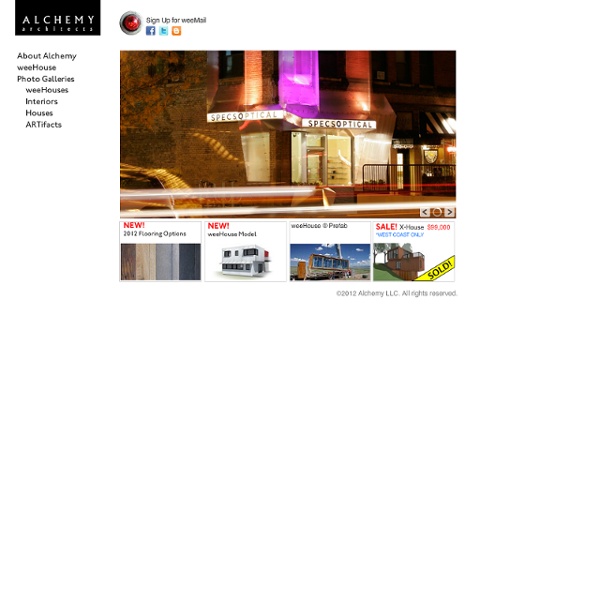 Built on Stilts: Tom Kundig's Sol Duc Cabin © Olson Kundig Architects/ Benjamin Benschneider Three years ago I called Tom Kundig TreeHugger's first Best of Green Architect of the year, saying: There shouldn't be any such thing as "green architecture"--it should be built into every building and taken for granted. It was a controversial choice, given that we are talking about getaways for the wealthy, but that's where the clients are, and when I look at his latest, the Sol Duc Cabin, I remain convinced that nobody does this better. © Olson Kundig Architects/ Benjamin Benschneider Composed of two levels, the cabin’s entry, dining and kitchen areas are located on the lower floor while a sleeping loft hovers above. Most of the structure—the steel frame and panels, the roof, shutters, and stairs—was prefabricated off-site, thereby reducing onsite waste and site disruption. The whole thing closes up tight as a drum for when the owner is away.

quotes Sunia Homes Are Modern, Affordable and An Interesting Demonstration of Changing Priorities Sunia Homes/ Laure Joliet/Promo image Green building costs more than conventional building if you just take the same house and add stuff to it, what Philadelphia builder Nic Darling calls "polishing the turd.". To build green affordably, you have to make choices, you have to pick your priorities. The interior of the home is absolutely basic and minimalist, with simple detailing and none of the fancy cabinetry that you find in a typical builders house. Sunia Homes/ Laure Joliet/Promo image The whole house, without land and a few incidentals, comes in at $ 150 per square foot, which is low in California. I think that it is a choice that a lot of people would make: simple, compact designs with well thought out basics instead of marble counters and closets that you can party in. And I love the stairs. Sunia Homes/Promo image

Google Maps for iPhone 3GS, iPhone 4, iPhone 4S, iPhone 5, iPod touch (3rd generation), iPod touch (4th generation), iPod touch (5th generation) and iPad on the iTunes App Store Amazing Expanding House Pops Out of Single Trailer © Mehdi Hidari Badie Back in the dawn of the shipping containers as housing era, nobody thought about using empty boxes and shipping air; because of the cost of the box and shipping, people were playing with folding designs. Designer Mehdi Hidari Badie has taken the idea of the pop-up to extremes with what Yanko calls an "Amazing Modern Mobile Home." Blu Homes should hire this guy or pick this unit up for their home shows; it is sort of an extreme version of their folding homes. Really extreme; there are a lot of panels to unfold, a lot of edges that will need gaskets and seals. Yanko writes: This cleverly compact mobile housing design by Mehdi Hidari Badie has got all the bases covered when it comes to making the most of limited space. It is all rather clever, over triple the size of the basic trailer, complete with exterior decks and solar panels on the roof.

Google Maps Mania 96 Sq. Foot Finnish Micro-Cabin Built Small To Forego Permits © Robin Falck The image of a secluded cabin in the woods recalls the simple, idealistic idyll of Henry David Thoreau's Walden, free of the impositions of society. This beautiful micro-cabin, built beside a lake in Finland, was constructed to go under the radar of Finnish building regulations, which require one to get a permit for anything that is larger than 96 to 128 square feet, depending on the district. Anticipating a one-year stint in the military, owner Robin Falck decided to design a cabin that wouldn't require getting tangled in bureaucratic red tape. Built with a 50 square foot loft above for sleeping and storage, and a ground floor lounge/living area and kitchen and bathroom, the house is designed to maximize the allowed area, plus boosting the capacity for great acoustics and natural daylighting. In addition to the tall window, there's an adjacent deck for a great view of the tranquil surroundings. Winter of 2009/2010 I spent designing and planning the house. © Robin Falck

mappiness, the happiness mapping app All-in-One Modular Fold Out Living Room Furniture Set This incredible all-in-one furniture set from Matroshka is still looking for funding – so if you want to have one you might need to become an investor. Named after Russian nesting dolls, this remarkable furniture collection packs down to just 13 square feet but includes: bookshelves, a double bed, corner couch, dinner table, four stools, working space, drawers, a wardrobe and additional storage. Whether or not these are ever mass-produced this great step-by-step furniture photo shoot should at least inspire do-it-yourselfers to think about how you can create your own highly portable and yet remarkably simple modular furniture sets to suit your own spatial needs:

Small Space Living + Giant Interior Design & Decor Ideas = Living with small apartment square-footage or a cramped condo layout does not have to mean thinking small about constructing and decorating your space, as illustrated by glacier-inspired interior design idea. Contemporary and classy at a glance, modern in color and material, this remodeled apartment is clearly cool in more ways than one – and the back-lit white surfaces do almost seem like sheets of ice between a resident and the outside world. The concept for this clever remodel by Gus Wusterman was derived from the surrounding snow-and-glacier-capped mountains of Lucerne. The design idea carries throughout the space, making the entire place seem more like a landscape than a series of individual rooms and thus bigger and rendering detailed decor largely unnecessary. This design thread culminates in a tiered series of white steps leading up to a rooftop deck from which the rest of the city and mountains can be seen all around.

9 Hours: A Small Boutique Pod Hotel with Minimalist Luxury 9 Hours is its name, brand, identity and purpose all rolled into one. Efficiency, order and functionality are not normally the hallmarks of a boutique hotel – yet this latest (and coolest) in the capsule hotel design chain does share much in common with its overt opposite: the high-end, niched and luxury accommodations that have become the rage in recent decades. So is it cheap or classy? Well, both. While its layout is simple, black-and-white icons and walls are minimal and overall aesthetic is austere, one cannot escape the feeling of walking into a posh place with understated class when entering this capsule hotel in Kyoto, Japan. In addition to 125 capsules, the structure contains locker rooms, lounges and showers for a comfortable overnight stay. All of the iconography to guide one through the hotel complex and introduce people to its concepts reinforces the core concept of the place: simple, functional, black, white and basic from start to finish.

Boulder-Like Home Office is a Working Retreat in the Garden As more and more people opt to work from home, more and more people are discovering just how difficult it is to separate home life from work life. The solution? A dedicated office space, preferably one detached from the main house. The Tetra Shed from Innovation Imperative is a particularly attractive example. The Tetra Shed was meant to challenge the idea that a home office has to be a room in the home that has simply been turned into an office. As a single unit, the Tetra Shed is just big enough for one or two people. Engineered timber, matte black rubber and birch faced plywood are the simple, back-to-basics materials used to create these visually fascinating modules. In the light of day, though, when the windows are opened up and sunlight pours in, the space is light and airy…and surprisingly roomier than it looks. The brilliantly minimalist sheds do not come with a minimal price tag, unfortunately.

Urban Oasis: Rustic Modern Rooftop Garden & Deck Design Weathered wood and concrete, rusted metal and rustling wild grass – nothing about this winding rooftop deck viewed from within suggests it could not be the back porch of a European country home. Nothing, that is, until you catch glimpses of the marvelous Manhattan skyline in the background. Likewise, nothing about its immediate surroundings suggests it to be anything but an overgrown roof-gone-wild, possibly the top of some aged warehouse building in an abandoned industrial town. Trellises, ponds, paths and fountains make this remarkable deck space as hard to pin down in time as it is in style – modern in its simplicity but timeless in terms of the materials used – a comfortably rusticated and well-planted retreat right in the heart of the city. Teak, bronze, zinc and rust-ready steel were added by Pull Tab designs to make this new addition to an antique walk-up apartment building blend as naturally as possible into its aged surroundings.

Feng Shui to Go: Modular Lofted Mini-Apartment on Wheels Spaces that seem small to even the most urban residents in the united states are sometimes spacious compared to those found in the crowded centers of major Japanese and Chinese cities. This elegant cube is the ultimate in well-balanced living – a space-saving design that still offers multiple rooms and peace of mind. Liu Ming lives and works out of a loft in San Francisco, but most of his space is dedicated to hosting students – little is left for day-to-day living and working. The solution? This wheeled cube of modest materiality but thoughtful construction. Principles of Feng Shui balance went into arranging the spaces internally and in relation to one another. Thanks to wheels along each corner, the cube can be rolled around as needed within the larger volume of the loft live-and-work apartment layout.