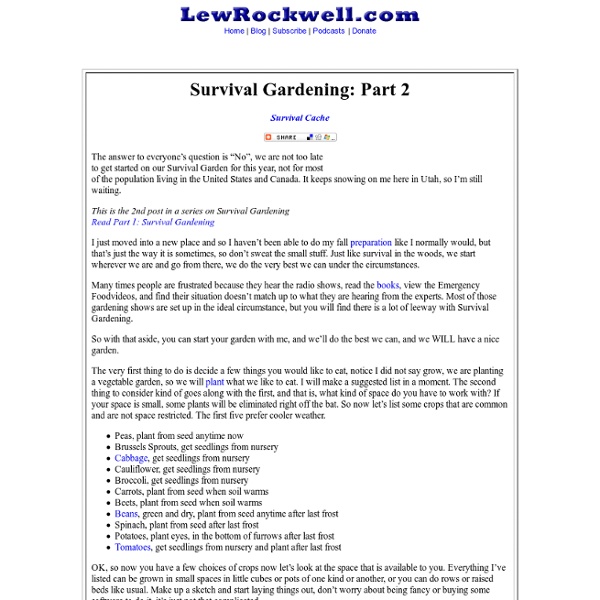 Survival Cache The answer to everyone’s question is “No”, we are not too late to get started on our Survival Garden for this year, not for most of the population living in the United States and Canada. It keeps snowing on me here in Utah, so I’m still waiting. This is the 2nd post in a series on Survival Gardening Read Part 1: Survival Gardening I just moved into a new place and so I haven’t been able to do my fall preparation like I normally would, but that’s just the way it is sometimes, so don’t sweat the small stuff. Many times people are frustrated because they hear the radio shows, read the books, view the Emergency Foodvideos, and find their situation doesn’t match up to what they are hearing from the experts. So with that aside, you can start your garden with me, and we’ll do the best we can, and we WILL have a nice garden. OK, so now you have a few choices of crops now let’s look at the space that is available to you. Read the rest of the article May 2, 2011

Survival Garden: Part 1 Growing A Survival Garden May Soon Become A Necessity! Have you considered that... survival gardening may soon be a true matter of survival and not just a choice? With the rapid decline of our financial system and food supply, grocery store produce and other products, may soon be at a crisis level shortage like we have never seen. At that point, gardening would no longer be a "choice" for a more self sufficient lifestyle, it would be a matter of survival for everyone! With the costs of living rising all the time, you can see the practical benefits of growing your own garden... you can save money, increase your family's health, and become more self sufficient all at the same time by growing vegetables in your backyard. Take advantage of whatever garden space you have, even if your garden may not provide all the food that you need, it will have a dramatic effect in reducing your food bill. Consider some of the benefits of growing your own garden... 1. Small Garden Space Larger Garden Space

Finger Lime - Happy Earth Microcitrus australasicaMYRTACEAE Growth Habit: The finger lime is a thorny deciduous shrub/small tree native to rainforests of south east Queensland and northern New South Wales. It grows slowly to a maximum height of around five to six metres. Foliage/Flowers: Green oval leaves of 1-3cm long grow on spindly looking, thorny branches. Small fragrant, white flowers typical of the citrus family appear in autumn. Fruit: The small fruits are cylindrical and finger like, growing up to 12cm long. Adaptation : Finger limes are hardy plants that grow naturally in heavy shade in areas of high rainfall and at the forest edges where there is more sunlight. Soils : Grows best in fertile, well-composted soil. Irrigation : Fruit will be best if the shrub is given frequent irrigation when the weather is warm, and kept on the dry side when it's cold. Pruning : Pruning is not necessary, though some of the lower branches may need to be removed to prevent fruit making contact with the ground.

Online Etymology Dictionary Survival Gardening And a Way to Relax and De-Stress Survival gardening can be fun, relaxing and actually quite simple… Many people seem to think they don’t have enough space for a garden but the areas where you can learn how to grow a basic vegetable garden are endless. Yep, I am talking about those spaces we try to fill in with all kinds of flowers, shrubs, and even in some cases, gravel, so that it looks nice…. :) Plant your veggies there. Along Side Your House The area alongside the house is perfect for plants as it is protected from many things, such as: Frost, will stay frost-free longer in the fallcritters, we have to protect everything we grow here in Montana from hungry deerhail, heavy rains, strong wind… plus the plants seem to grow faster and I think it may be because heat is magnified. You may want to use non-hybrid seeds to do gardening as you will be able to harvest your own seeds for the following year this way. Visit our Survival Garden Ebooks page for simple green thumb helpsbooks..

Square Foot Gardening 101 Update! Check out our new Square Foot Gardening Infographic for even more tips, diagrams, a plant list and much more. I recently stumbled upon a book (All New Square Foot Gardening: Grow More in Less Space! by Mel Bartholomew) with an interesting gardening method called square foot gardening, and decided we would give it a try. I’ve always thought the idea of having a vegetable garden would be a lot of fun. I know just enough about gardening to know that I am not very good at it, and that it is a lot of work. What is Square Foot Gardening? The idea behind square foot gardening is that you can plant fruits, vegetables and flowers in raised beds, above infertile soil and even out of the reach of pets. Materials Needed to Set Up a Square Foot Garden Material costs are variable, depending on the size of garden you plan to build. (1) Sheet untreated plywood – $0.00 (leftover scrap from a previous home improvement project) I buy our seeds from Burpee Seed Company. Total Start-up Cost: $42.02

Micro Forest Garden – installation Following on from designing a microforest garden recently, it was time to realise the design! Harris led the charge, helped by forest garden interns Minoru and Kelly, as well as all the students of the forest garden design course. This micro forest garden was to be established on a very compacted piece of ground that had formerly been a road. Conceptual group design for the microforest garden, done during the course by students The final design. The site, shortly after it ceased being a road in Spring 2011… A year later, during the microforest garden install… Paths and beds in, it’s time for the plantathon The particular parameters of this site include that, in a heavy rain event, there is a large amount of surface runoff due to the compaction uphill. Harris had encountered designs like this in Chile where he’s recently been teaching permaculture (and learning all the while), on sites with poor soil and erratic rainfall. But who knows what the future will bring. Back to the install.

LibriVox | free public domain audiobooks Survival Seeds Vault Seeds may become more valuable than GOLD in an economic collapse... **Notice** If using Internet Explorer and the "Add to Cart" button does not work, click inside the quantity field and push the "Enter" key on your keyboard. Why should you buy the Survival Seed Vault™ from Heirloom Organics Non-Hybrid Seeds? This seed pack is processed for long term storage according to the US Dept. of Agriculture (USDA) methods for maximum shelf life, increasing the shelf-life of our seeds by many years. Each Survival Seed Vault™ has a total of 25 varieties of NON-HYBRID seeds. Each Survival Seed Vault™ Contains These Hand Picked, Open Pollinated Varieties: *Important: We are in a very real non-hybrid seed shortage. Now you can grow your Survival Garden for bountiful harvest anywhere in the country. If the economy worsens, one of the first things to be affected will be our country’s food supply. causing soaring prices and severe shortages. Can You Take Charge Of Your Family’s Food Supply? P.S. P.P.S.

Bear dog Wiki Taxonomy[edit] An artist's reconstruction of a bear dog Amphicyonidae were named by Haeckel (1886) [also attributed to Trouessart 1885]. It was assigned to Carnivora by Sach and Heizmann (2001); to Arctoidea by Hunt (2001), Hunt (2002) and Hunt (2002); affirmed as Arctoidea by Zhai et al. (2003); affirmed to Arctoidea by Carroll (1988), Hunt (1998) and Wang et al. (2005); and to Caniformia by Morlo et al. (2007).[2][3][4] Origins[edit] Amphicyonids, often referred to as "bear dogs", crossed from Europe to North America during the Miocene epoch and are considered an Old World taxon. Evolution[edit] While amphicyonids have traditionally been viewed as closely related to ursids (bears), some evidence suggests they may instead be basal caniforms. During the early Miocene, a number of large amphicyonids migrated from Eurasia into North America. Classification[edit] See also[edit] References[edit] Jump up ^ Paleobiology Database: Amphicyonidae, age range and collectionsJump up ^ V.