Off-grid cabin lets you escape civilization in style. It's not often you get the chance to own a home designed by a leading architecture firm, but a recent collaboration between Snøhetta and Norwegian purveyor of leisure homes Rindalshytter makes it possible. 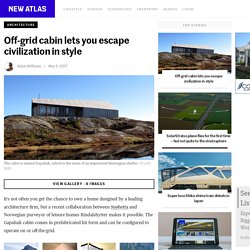 The Gapahuk cabin comes in prefabricated kit form and can be configured to operate on or off-the-grid. The Gapahuk takes its name from a simple Norwegian shelter sometimes built by hikers to sit out rough weather – the same shelter that inspired Cabin Ustaoset. Inside, there's a total floorspace of 90 sq m (968 sq ft) available, all laid out on one floor. This floorspace is divided between three bedrooms (one master and two slightly smaller), a bathroom with toilet, sink and shower, an additional WC, and a large common area that includes kitchen, lounge, and dining table. There's also a covered porch and plenty of storage space for outdoors gear, wood, and the like. Sources: Snøhetta, Rindalshytter. Croatian mountain lodge by Tomislav Soldo designed to light up like a lantern through diagonal shutters.

Black-painted larch clads this small house in Croatia, designed by architect Tomislav Soldo for a hill overlooking forests and mountains. 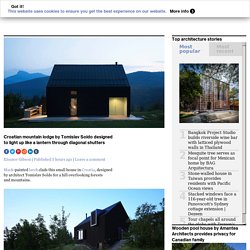 Soldo designed the two-storey Black Lodge for a sloped site in Gorski Kotar, a mountainous region in Croatia, with large windows to provide views of the surroundings. Like other residences in the region, the 100-square-metre house has a pitched roof, a compact layout and a wooden facade. In this instance, the architect chose Siberian larch cladding, which is painted with black tar that penetrates deep into the wood to offer protection over a long period of time. Steel beams support dramatic roof overhangs at Washington state retreat by Coates Design.

Seattle firm Coates Design has completed a home in Washington's Cascade mountain range that serves as a hub for members of a large extended family. 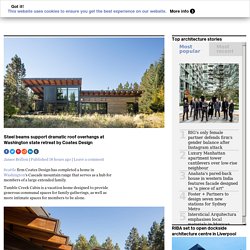 Tumble Creek Cabin is a vacation home designed to provide generous communal spaces for family gatherings, as well as more intimate spaces for members to be alone. "The retreat provides ample nooks for those seeking a peaceful hideaway – and warm, light-filled spaces for lively groups," according to the studio. The residence's main volume contains two bedrooms, a bunk room, and the home's social areas. These sleeping quarters are laid out on a longitudinal corridor, and their windows face north. An open-concept kitchen, living, and dining room occupies the eastern portion of the home.

Invisible Studio builds fibreglass prototyping workshop at its growing woodland campus. British practice Invisible Studio has completed a model-making shed beside its self-built studio in the Bath woodland, using a combination of timber grown and milled on site, and corrugated fibreglass. 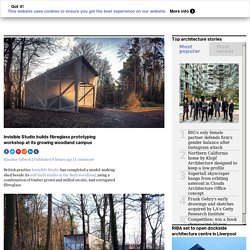 The Ghost Barn will be used for prototyping full-sized structures at Invisible Studio's growing research facility in southwest English, where it accompanies a studio built from recycled materials and a long-drop composting toilet. As with the previous structures, Invisible Studio-founder Piers Taylor recruited a team of unskilled volunteers and friends to help build the workshop, which was completed in under two weeks. Delordinaire elevates high house above snow-covered landscape in quebec. Mar 08, 2017 delordinaire elevates high house above snow-covered landscape in quebec emerging from its snow covered hillside location in quebec, canada, the stark-white gabled structure stands as a private chalet residence designed by delordinaire. the pitched silhouette is offset by the minimalist structural support which lends in creating a protected ground floor area that can be used throughout the year. all images © olivier blouin the clean, sharp lines and archetypal volume allows the building to cut a clear form against its context. the minimal and all-white materials used, including concrete panel cladding and the roof topped with corrugated steel allows the chalet to almost disappear during the winter, meanwhile stand out on a summer’s day. 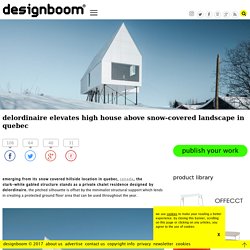 Penelas Architects embeds glass and rusted-steel retreat in forest glade near Madrid. Entirely glazed walls ensure the owners of this residence designed by Penelas Architects are presented with the best possible views of a picturesque forest outside Madrid. 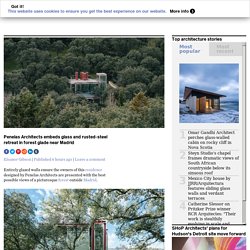 Local studio Penelas Architects designed the two-storey Hidden Pavilion for a sloped clearing in a forest in Las Rozas – a township of Madrid – with the aim to create a space for meditation and retreat. The dense forest and rural location provide the residents with plenty of privacy, while the expanses of glazing set within the building's exposed red steel structure provide scenic vistas from every room. "Fully embedded within the forest, the pavilion openly embraces the presence of nature through the enclosure of its glass exterior," said the architects. The studio also wanted the 70-square-metre house to directly respond to a couple of trees growing on the site around it. The rear facade of the upper level is slanted to provide space for one, a holm oak tree. Photography is by Miguel de Guzmán. Dezeen. Canadian studio Omar Gandhi Architect has created a remote vacation home in Nova Scotia for an urban couple, with floor-to-ceiling windows that provide sweeping views of the sea. 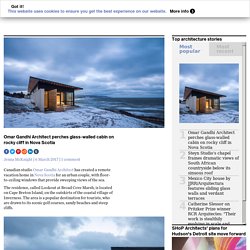 The residence, called Lookout at Broad Cove Marsh, is located on Cape Breton Island, on the outskirts of the coastal village of Inverness. The area is a popular destination for tourists, who are drawn to its scenic golf courses, sandy beaches and steep cliffs. Dezeen. Design Miami 2015: San Francisco designer Yves Béhar created a temporary beach hut installation to showcase his collection of surfboards in Miami Design District. 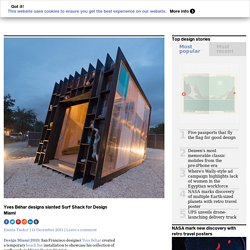 The corrugated plastic and plywood structure sloped backwards, and featured dark beams of wood arranged in a grid that forms the front of the hut, and extends across its roof. These panels created exterior shelving for storing rocks and shells collected after surfing, and provided slats at the back of the shack to store boards. Red beach hut by Jonathan Hendry Architects stands atop former toilet block. Jonathan Hendry Architects has built a beach hut clad in red-stained timber on top of an old toilet block in the English seaside town of Sandilands. 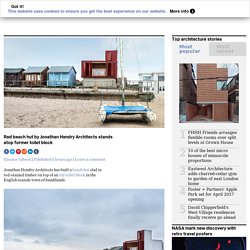 The London and Lincolnshire-based architects renovated and extended the small toilet block to provide a chalet on the sea front. Located at the end of a row of beach huts, the existing toilet block had white rendered walls and a flat concrete roof. Hex House. WOJR designs forest cabin concept for a grieving man. A place for ‘car guys’ of all kinds. SANTA FE – About 20 years ago, Tom Linton had a problem – four cars and a garage too small. 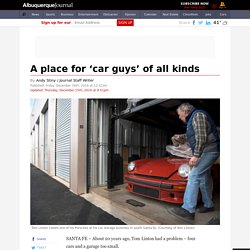 “I had a two-car garage and it was always a scramble, where I am going to put this, the winter’s here. So I thought I can try and add on to my garage, which would have cost a lot of money, or maybe there are other people with this same problem,” said Linton. He calls it an “aha moment,” leading to construction of the first of three car storage facilities on a half acre on Airport Road. His business, located on Avenger Way and Mallard Way, is called Collector Cars of Santa Fe. The third building, just completed, is the Mallard Motorplex – a 15,000-square-foot building designed to hold eight to 10 cars. Tom Linton stands in front of a car storage space at his Collector Cars of Santa Fe off Airport Road.

Linton’ first two buildings were quickly occupied. Linton grew up in New York and became familiar with New Mexico from family ski vacations here. Linton, 61, moved to Santa Fe in 1993. Raumhochrosen's woodland cabin in Austria provides respite for life coach. Austrian architecture studio Raumhochrosen designed this compact timber cabin as a wilderness retreat for a life coach and songwriter. Tom's Hut is located in a patch of woodland in Austria's Wienerwald municipality, where it provides its owner respite from his busy urban life. Raumhochrosen prefabricated the angular, timber structure offsite before slotting it into its sloping, tree-covered plot. "If a mental coach is also an Austrian songwriter, living his life between extremes, he needs a woodland wilderness hut as a balance to his life in the middle of the town," said the architects.

"This simple house refers intensively to its environment, follows the contour of a previous, decaying building and was really drafted around a man and his passions. " Vertical lengths of timber clad the walls of the hut, while metal sheeting covers its mono-pitched roof and chimney. Photography is by Albrecht Imanuel Schnabel. Reiulf Ramstad designs angular wooden cabins for a Norwegian valley. These atmospheric renderings reveal designs by Oslo-based Reiulf Ramstad Arkitekter for a pair of angular holiday cabins in the Norwegian countryside. Reiulf Ramstad's firm was commissioned to create the cabins as a family retreat in the Røldal valley, which is located 300 kilometres west of Oslo at the northern end of the Røldalsvatnet lake.

This Secluded Library In The Woods Is Every Book Lover’s Dream. Some people like to read books in cafes, or on the tube while commuting to work. Others like to read them in the quietest place they can find, somewhere that allows them to fully immerse themselves in the words without having the magic diluted by noise. Show Full Text If you’re one of those people then you’re going to love this secluded library retreat in the woods of New York State. It’s designed by US firm Studio Padron and it’s called the Hemmelig Rom (that’s Norwegian for “secret room” by the way).

The 200 square meter black cabin is made from oak, and inside there’s a bed, an armchair, a desk, and even a wood-burning stove to keep you cozy while you curl up with a novel plucked from the book-lined shelves that surround you. Wendell Burnette builds a little house on the prairie in Wisconsin. This zinc-clad home by US studio Wendell Burnette Architects sits in the middle of a Wisconsin crop field (+ slideshow).

The 5,000-square-foot Prairie House is a simple box clad in galvanised zinc, located on a 16-acre farmed site near the town of Ellington. Crops grown across the stretch of land include corn, soybean, wheat, and oats, while apple orchards hide occasional pumpkin patches. Giles Miller designs shingle-covered pavilion for English countryside. Shingles inscribed with personal messages cover this squat hilltop pavilion, created by British designer Giles Miller as a rest stop for ramblers (+ slideshow). 10+ Lonely Little Houses To Get Away From This World.

Besonias almeida adds private pavilion to buenos aires house. Aug 19, 2016 besonias almeida adds private pavilion to buenos aires house local-based architecture studio besonias almeida arquitectos was commissioned to add a pavilion to an already existing house in buenos aires, argentina. the idea behind this inclusion was to realize a new space, isolated from the activity of the principal house and generating more relaxed functions. a strong connection with nature was also intended as well as both visual and auditive privacy while maintaining a comfortable feeling in both winter and summer. all images by federico kulekdjian. The Rah Design MDK9 Dog Haus Is a Penthouse for Dogs. Rhode Island coastal retreat comprises multiple gabled forms. Steel-clad Micro Cabins are built to last. A group of architecture students from the Colorado Building Workshop recently constructed 14 attractive small cabins near Leadville, Colorado. The prefabricated dwellings offer bare-bones accommodation for visitors to an outward bound center.