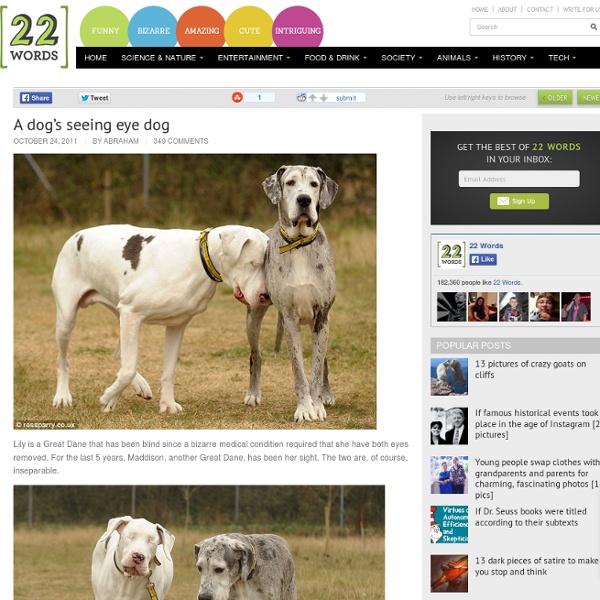 Lily is a Great Dane that has been blind since a bizarre medical condition required that she have both eyes removed. For the last 5 years, Maddison, another Great Dane, has been her sight. The two are, of course, inseparable. (via Weird Universe, Daily Record, The Sun)

Lewis and Clark's dog, Seaman The final reference to Seaman in the journals, recorded by Lewis on July 15, 1806, states that "[T]he musquetoes continue to infest us in such manner that we can scarcely exist; for my own part I am confined by them to my bier at least 3/4 of the time. My dog even howls with the torture he experiences from them."[3][4]

The Mysterious "Mirror Man" appears in L.A. - Illusion - The Most Amazing Creations in Art, Photography, Design, Technology and Video. When I first looked at the photos of “mirror man,” I thought it was a sculpture. But photographer SilverSky took these pictures and commented: “I was in LA and this guy shows up in a suit from head to toe made of glass. I thought it was pretty cool.” So now it is clear, that it is a man in costume. Update (September 21st, 2010): Thanks to reader Fourfirearts for sending the following information: “the ‘mirror man’ aka ‘The Collector’ is artist Gustav Troger of San Francisco and Vienna.

Silk-Dyed Eggs {aka TIE-Dyed!} I posted this tutorial a few years ago and it has become somewhat of a tradition to bring it back every year! One of our family Easter traditions is dying eggs with pieces of silk. I saw a cute lady show Martha how to do it a few years ago and I ran upstairs right then to steal a tie! It’s way cooler than those cups of neon liquid that end up all over your clothes, your furniture and your hands plus it gives you an excuse to rid a man’s closet of ugly ties.

6 Animals That Show Mother Nature’s Sense of Humor You've heard jokes like these all your life: What do you get if you cross an octopus with a cow? An animal that can milk itself. I didn't find such an animal, but the world has plenty of strange species that at first glance appear to be hybrids of unrelated species because they have attributes that surprise us. Retirement ceremony for military dog finally reunited with Marine he was blown up with in Iraq after a fight to save him from death row By Laura Cox Published: 15:01 GMT, 7 April 2012 | Updated: 15:01 GMT, 7 April 2012 After years of administrative battle a military dog handler was finally reunited with her loyal friend. Former Marine Cpl. Megan Leavey was told in March that she would be allowed to give a home to Sgt.

'Ningen' humanoid sea creatures of the Antarctic Over the past few years, rumors have circulated in Japan about the existence of gigantic humanoid life-forms inhabiting the icy waters of the Antarctic. Hello, Ningen Reportedly observed on multiple occasions by crew members of government-operated "whale research" ships, these so-called "Ningen" (lit. "humans") are said to be completely white in color with an estimated length of 20 to 30 meters. Eyewitnesses describe them as having a human-like shape, often with legs, arms, and even five-fingered hands. The Fascinating Buddhist Approach to Low Self-Esteem Photo Credit: Shutterstock March 19, 2012 | Like this article? Join our email list: Stay up to date with the latest headlines via email.