Phoolan Devi. Born to a low-caste family in rural Uttar Pradesh, Devi's early years were characterised by numerous incidents of sexual abuse, followed by a criminal career she later became known for. 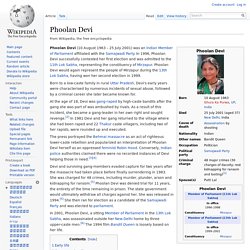 The press portrayed the Behmai massacre as an act of righteous lower-caste rebellion and popularized an interpretation of Phoolan Devi herself as an oppressed feminist Robin Hood. Conversely, Indian police authorities claimed there were no recorded instances of Devi helping those in need.[3][4] Devi and surviving gang-members evaded capture for two years after the massacre had taken place before finally surrendering in 1983. She was charged for 48 crimes, including murder, plunder, arson and kidnapping for ransom.[5] Phoolan Devi was denied trial for 11 years, the entirety of the time remaining in prison.

The state government would ultimately withdraw all charges against her. Early life[edit] Devi's family were very poor. Career as a bandit[edit] Initiation into banditry[edit] Surrender and jail term[edit] Not Rape Victim, But Rape Survivor Part II - Recovering from Rape. Updated August 23, 2012 After 19-year-old Renee DeVesty was raped by an acquaintance -- and chose to terminate the pregnancy that resulted from her rape -- she found that recovering physically was far easier than moving past the emotional trauma of rape. 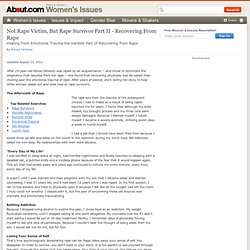 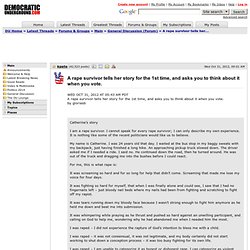 Catherine’s story I am a rape survivor. I cannot speak for every rape survivor; I can only describe my own experience. It is nothing like some of the recent politicians would like us to believe. My name is Catherine. For me, this is what rape is: It was screaming so hard and for so long for help that didn’t come. It was fighting so hard for myself, that when I was finally alone and could see, I saw that I had no fingernails left – just bloody nail beds where my nails had been from fighting and scratching to fight off my rapist. It was tears running down my bloody face because I wasn’t strong enough to fight him anymore as he held me down and beat me into submission. It was whimpering while praying as he thrust and pushed so hard against an unwilling participant, and calling on God to help me, wondering why he had abandoned me when I needed him the most. 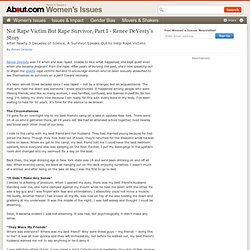 Unable to face what happened, she kept quiet even when she became pregnant from the rape. After years of burying the past, she's now speaking out to dispel the shame rape victims feel and to encourage women who've been sexually assaulted to see themselves as survivors on a path toward recovery. It's been almost three decades since I was raped -- not by a stranger, but an acquaintance. The man who held me down was someone I knew and trusted. It happened among people who were lifelong friends; and like so many women, I was terrified, confused, and blamed myself for far too long. The Circumstances I'd gone for an overnight trip to my best friend's camp on a lake in upstate New York. I rode to the camp with my best friend and her husband. Back then, the legal drinking age in New York state was 18 and we'd been drinking on and off all day.

"It Didn't Make Any Sense" I awoke to a feeling of pressure. Rape and Sexual Abuse Survivors - Dancing In The Darkness. An Open Letter to Rep. Akin From a Woman Who Got Pregnant From Rape. Why didn’t I scream when I was raped? I know that I was raped. 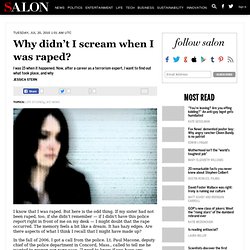 But here is the odd thing. If my sister had not been raped, too, if she didn’t remember — if I didn’t have this police report right in front of me on my desk — I might doubt that the rape occurred. The memory feels a bit like a dream. It has hazy edges. Are there aspects of what I think I recall that I might have made up? In the fall of 2006, I got a call from the police. Lt. I had recently requested the complete file. The file had to be redacted. “It was clear to us what had to be done,” Lt. But I was willing. Lt. In notes from February 13, 1974, four months after the crime, I see: “Personal visit.