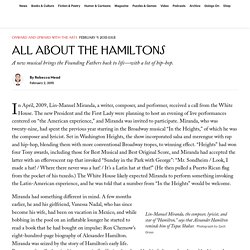 The new President and the First Lady were planning to host an evening of live performances centered on “the American experience,” and Miranda was invited to participate. Miranda, who was twenty-nine, had spent the previous year starring in the Broadway musical “In the Heights,” of which he was the composer and lyricist. Set in Washington Heights, the show incorporated salsa and merengue with rap and hip-hop, blending them with more conventional Broadway tropes, to winning effect.

Various Artists: Hamilton: Original Broadway Cast Recording. Hip hop is nothing if not rich in drama. 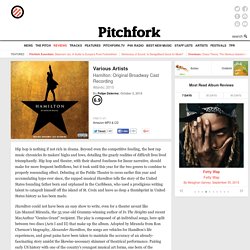 Beyond even the competitive feuding, the best rap music chronicles its makers' highs and lows, detailing the gnarly realities of difficult lives lived triumphantly. Hip hop and theater, with their shared fondness for linear narrative, should make for more frequent bedfellows, but it took until this year for the two genres to combine to properly resounding effect. Debuting at the Public Theater to raves earlier this year and accumulating hype ever since, the rapped musical Hamilton tells the story of the United States founding father born and orphaned in the Caribbean, who used a prodigious writing talent to catapult himself off the island of St. Croix and leave as deep a thumbprint in United States history as has been made. The dark years of Arashi: 2000-2005. Arashi turned 12 this year. 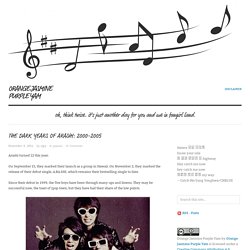 On September 15, they marked their launch as a group in Hawaii. On November 2, they marked the release of their debut single, A.RA.SHI, which remains their bestselling single to date. La La Land’s Ending Isn’t That Bittersweet. Warning: This post has heavy spoilers for La La Land. 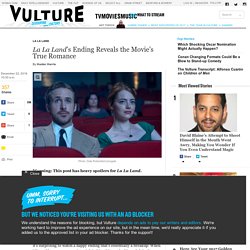 In the five year fast-forward near the end of La La Land, Mia (Emma Stone) seems to have gotten everything she ever dreamed of: She's a big-time Hollywood actress, a VIP on the studio lot where she used to work as a barista. The first hint that things haven't turned out exactly like we thought they would comes when we learn that Mia has a baby — really? Here's What Happened When I Complimented Everyone I Met For an Entire Day. No one gets enough praise. 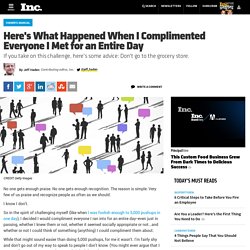 No one gets enough recognition. The reason is simple: Very few of us praise and recognize people as often as we should. I Watched My Ex Fall In Love With Someone Else On Facebook - BuzzFeed News. The most L.A. car chase ever gives everyone something to tweet about. Open convertible driving in the rain? 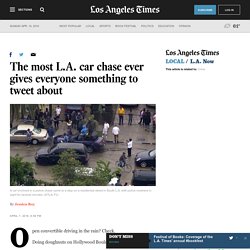 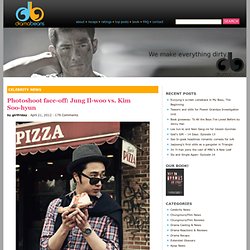 Joseph Kim. Why Readers, Scientifically, Are The Best People To Fall In Love With. Ever finished a book? 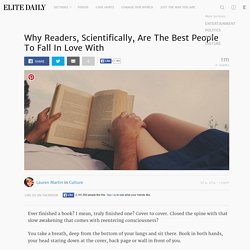 I mean, truly finished one? Cover to cover. Closed the spine with that slow awakening that comes with reentering consciousness? Why Generation Y Yuppies Are Unhappy. Say hi to Lucy. 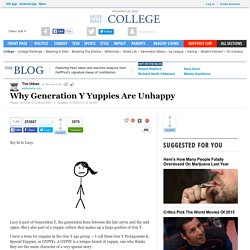 Lucy is part of Generation Y, the generation born between the late 1970s and the mid 1990s. She's also part of a yuppie culture that makes up a large portion of Gen Y. I have a term for yuppies in the Gen Y age group -- I call them Gen Y Protagonists & Special Yuppies, or GYPSYs. A GYPSY is a unique brand of yuppie, one who thinks they are the main character of a very special story. We Are All Looking For The Same Thing. I used to drink coffee every morning, but now I drink tea. 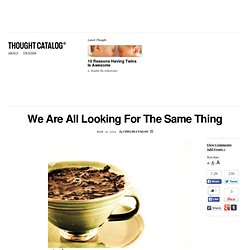 I feel I am very much a coffee person in spirit — in the same way that I am a dog person, maybe — but I have always been drawn to tea people. They have surrounded me in life and warmed me to the more nuanced, quiet pleasures of all the different teas there are to try. My best friend loves English Breakfast, my sister loves Earl Grey, my boyfriend loves Lapsang Souchong. University of Toronto Libraries. Tom WaymanFrom: The Astonishing Weight of the Dead. Vancouver: Polestar, 1994. Question frequently asked by students after missing a class Nothing. 6point8 comments on So my wife just agreed to name our unborn son Sterling Archer. IAmA guy whose bromance has turned into a gay relationship, yet neither of us admit it. AMA : IAmA.

Cloud Thoughts. On June 10th, 2012, I married my best friend. It sounds so typical, but really, he is. Nobody else knows me on a level like that. He has seen me at my best and seen my ugliness right up in his face. He has made me cry more tears of joy than tears of pain. I am most vulnerable to him, but I trust him to care for my unpredictable heart. Anyone who has experienced being in love knows that it’s just beautiful. Www.macobo.com/essays/epdf/Me Talk Pretty One Day by Sedaris.pdf.