The 15 Most Memorable Trans Characters in Indie Film. By Indiewire | Indiewire July 10, 2015 at 11:32AM As Sean Baker's acclaimed "Tangerine" joins "Mala Mala" in select theaters this weekend, Indiewire offers a selection of some of the most unforgettable trans characters in indie film history. 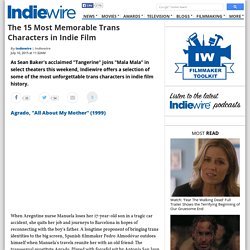 Agrado, "All About My Mother" (1999) When Aregntine nurse Manuela loses her 17-year-old son in a tragic car accident, she quits her job and journeys to Barcelona in hopes of reconnecting with the boy's father. A longtime proponent of bringing trans identities to the big screen, Spanish filmmaker Pedro Almodóvar outdoes himself when Manuela's travels reunite her with an old friend: The transsexual prostitute Agrado. Played with forceful wit by Antonia San Jaun, Agrado bares her soul and confidence during a monologue in which she addresses an audience about the true meaning of "authentic. 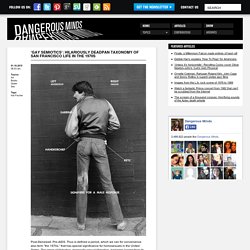 Pre-AIDS. Thus is defined a period, which we can for convenience also term “the 1970s,” that has special significance for homosexuals in the United States. The genie of liberation, especially sexual liberation, had been loosed from its magic lamp, but the devastating toll of plague had not yet made its mark. Under those circumstances, while still enjoying or enduring marginalization in society, homosexual males could engage in behavior that was at once highly promiscuous and yet highly coded. Into this situation wandered a photographer named Hal Fischer, who published a monograph in 1977 with the provocative title Gay Semiotics based on pictures taken in San Francisco, especially Castro Street and Haight Ashbury. 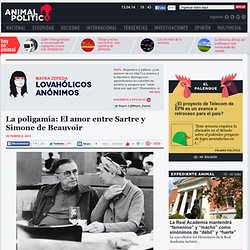 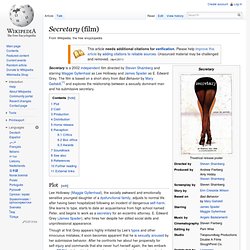 Edward Grey. The film is based on a short story from Bad Behavior by Mary Gaitskill,[1] and explores the relationship between a sexually dominant man and his submissive secretary. Lee Holloway (Maggie Gyllenhaal), the socially awkward and emotionally sensitive youngest daughter of a dysfunctional family, adjusts to normal life after having been hospitalized following an incident of dangerous self-harm. She learns to type, starts to date an acquaintance from high school named Peter, and begins to work as a secretary for an eccentric attorney, E. Edward Grey (James Spader), who hires her despite her stilted social skills and unprofessional appearance. Though at first Grey appears highly irritated by Lee's typos and other innocuous mistakes, it soon becomes apparent that he is sexually aroused by her submissive behavior. Track listing. Hedwig and the Angry Inch - Origin of Love. En Soap. Object sexuality. Object sexuality or objectum sexuality, in German Objektophilie (OS),[1] is a pronounced emotional and often romantic desire towards developing significant relationships with particular inanimate objects.

Those individuals with this expressed preference may feel strong feelings of attraction, love, and commitment to certain items or structures of their fixation. For some, sexual or even close emotional relationships with humans are incomprehensible. Some object-sexual individuals also often believe in animism, and sense reciprocation based on the belief that objects have souls, intelligence, and feelings, and are able to communicate.[2] Contrary to sexual fetishism, the object to an OS person is viewed as their partner and not as a means to an end to enhance a human sexual relationship.

Community[edit] The logo for the OS Internationale is the Swedish Red Fence, Röda Staketet, and represents the fence of Mrs. Research[edit] In February 2009, Dr. Awareness[edit] Dr. Literature[edit] Tabloid Trailer (Documentary) My car is my lover 1/5. GENESIS BREYER P-ORRIDGE. Not your usual love story - a list by xundercoverxx.