A Writer Gets Grilled By His 18-Year-Old Self In 'Later That Same Life' Peter "Stoney" Emshwiller tells his 18-year-old self, "I'm old, I'm fat and, in your mind, I'm a failure. 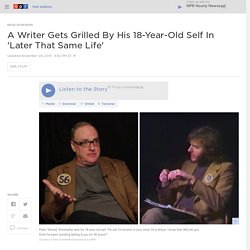 I know that. Why do you think I've been avoiding talking to you for 38 years? " Courtesy of Peter Emshwiller/Screenshots by NPR hide caption toggle caption Courtesy of Peter Emshwiller/Screenshots by NPR Peter "Stoney" Emshwiller tells his 18-year-old self, "I'm old, I'm fat and, in your mind, I'm a failure. Courtesy of Peter Emshwiller/Screenshots by NPR In 1977, an 18-year-old Peter "Stoney" Emshwiller filmed himself asking questions meant for his future self. Thirty-eight years later, the writer and voice actor sat down to answer his young self's questions. Interview Highlights On watching the 1977 footage for the first time in years The biggest thing that surprised me is, back then, I had very, very bad self-image. Time To Reclaim Earth’s Hijacked Ancient Energy. By Zen Gardner Contributing Writer for Wake Up World The takeover of the earth’s energy grid being executed on our planet’s spiritual energy system by clearly malevolent forces has been in effect for eons. 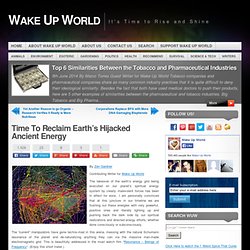 I am personally convinced that at this juncture in our timeline we are flushing out these energies with very powerful, positive ones and literally lighting up and pushing back the dark side by our spiritual realizations and directed energy efforts, whether done consciously or subconsciously. The “current” manipulators have gone techno-mad in this arena, messing with the natural Schumann resonance of the planet and de-naturalizing anything they can via the massive man-made electromagnetic grid. This is beautifully addressed in the must watch film “Resonance – Beings of Frequency“. We have much to learn in this arena but it’s all contingent on our actions. We all have our experiences to draw upon. Wade in with wisdom.

Now we’re talking! The Hijacking Let the wind fill your sails! What If Atheists Were Defined By Their Actions? : 13.7: Cosmos And Culture. Mark Poprocki/iStockphoto We classify people in all sorts of ways. 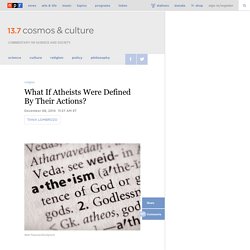 Some categories are based on a person's beliefs: A theist, for instance, is a person who believes in one or more gods. Some categories are based on behavior: A vegetarian, for example, is a person who doesn't eat animals. And some categories seem to straddle beliefs and behavior: Being politically conservative could be defined in terms of beliefs, but also in terms of corresponding behaviors, such as voting for conservative political candidates or donating one's time or money to conservative causes. These different ways of defining categories of people — and in particular the category "atheist" — form the backdrop to an interesting episode of the Rationally Speaking podcast in which co-hosts Julia Galef and Massimo Pigliucci query astrophysicist Neil deGrasse Tyson on his resistance to identifying (or being identified) as an atheist.

This gets to the heart of why we classify people at all. NPR most emailed stories. When we began our 50 Great Teachers series, we set out to find great teachers and tell their stories. 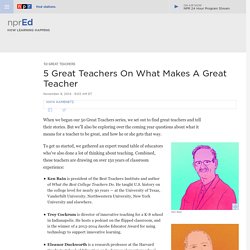 But we'll also be exploring over the coming year questions about what it means for a teacher to be great, and how he or she gets that way. To get us started, we gathered an expert round table of educators who've also done a lot of thinking about teaching. Combined, these teachers are drawing on over 150 years of classroom experience: Ken Bain is president of the Best Teachers Institute and author of What the Best College Teachers Do. He taught U.S. history on the college level for nearly 50 years — at the University of Texas, Vanderbilt University, Northwestern University, New York University and elsewhere. What qualities make a great teacher? Renee Moore: The Hebrew word for teach has, among its meanings: to aim or shoot like an arrow, to point like a finger, to flow like water.

Ken Bain: ... I think about the way my youngest grandson is learning to ride a bicycle. 'A Universe Beneath Our Feet': Life In Beijing's Underground. Twenty-one-year-old Liu Jing sits in her apartment two stories underground in Beijing, China. 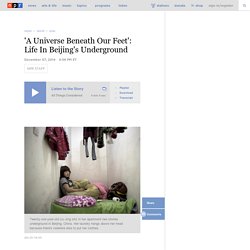