On Heroes - Ann Easley. Recently, someone multiple generations ahead of me and well respected in Silicon Valley told me that I’m a pioneer. 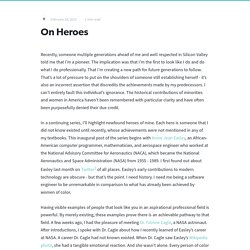 The implication was that I’m the first to look like I do and do what I do professionally. That I’m creating a new path for future generations to follow. Jonathan Ive and the Future of Apple. I. 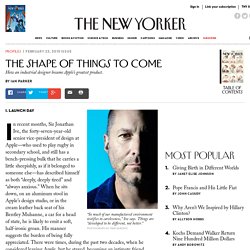 Launch Day In recent months, Sir Jonathan Ive, the forty-seven-year-old senior vice-president of design at Apple—who used to play rugby in secondary school, and still has a bench-pressing bulk that he carries a little sheepishly, as if it belonged to someone else—has described himself as both “deeply, deeply tired” and “always anxious.” When he sits down, on an aluminum stool in Apple’s design studio, or in the cream leather back seat of his Bentley Mulsanne, a car for a head of state, he is likely to emit a soft, half-ironic groan. His manner suggests the burden of being fully appreciated. There were times, during the past two decades, when he considered leaving Apple, but he stayed, becoming an intimate friend of Steve Jobs and establishing the build and the finish of the iMac, the MacBook, the iPod, the iPhone, and the iPad. 60fps on the mobile web — Flipboard Engineering. Flipboard launched during the dawn of the smartphone and tablet as a mobile-first experience, allowing us to rethink content layout principles from the web for a more elegant user experience on a variety of touchscreen form factors. 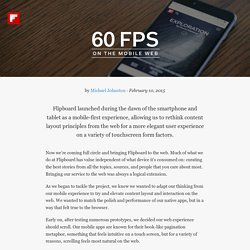 Now we’re coming full circle and bringing Flipboard to the web. Much of what we do at Flipboard has value independent of what device it’s consumed on: curating the best stories from all the topics, sources, and people that you care about most. It’s Only Color. Working with color while designing is really about creating another dimension in your medium. 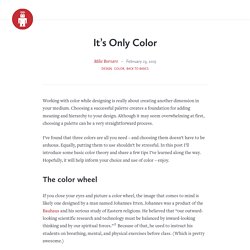 Choosing a successful palette creates a foundation for adding meaning and hierarchy to your design. Although it may seem overwhelming at first, choosing a palette can be a very straightforward process. I’ve found that three colors are all you need – and choosing them doesn’t have to be arduous. Equally, putting them to use shouldn’t be stressful. In this post I’ll introduce some basic color theory and share a few tips I’ve learned along the way. Why Malcolm X Is Getting Written Out of History.

Half way down a winding country road in New York’s wealthy Westchester County, one of America’s most famous revolutionaries lies buried under three feet of crisp white snow. 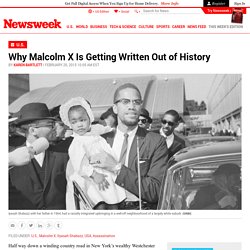 It is 50 years since Malcolm X was gunned down at the Audubon Ballroom in Washington Heights, Manhattan, and since then he has lain in Ferncliff Cemetery – far from his people, surrounded by a ring of country clubs and golf clubs, alongside other dead celebrities including Judy Garland, Joan Crawford and Ed Sullivan. He is an icon. He is a face on a T-shirt. Why Language May Shape Our Thoughts. Vanishing Act. In a New Hampshire apartment during the winter of 1923, this typewritten notice was fastened squarely against a closed door: Nobody may come into this room if the door is shut tight (if it is shut not quite latched it is all right) without knocking. 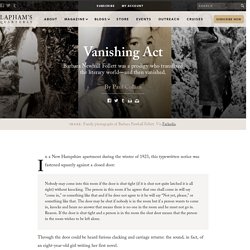