NO TO THE DOG MEAT 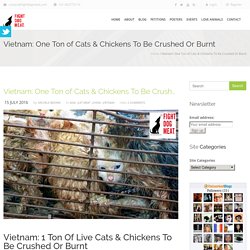 The cats and chickens were seized from two trucks which were smuggling animals from China, into Vietnam. Neither driver could produce documents for their consignments, so therefore Vietnamese law stipulates illegal goods be destroyed by crushing or burning. Vietnam does not have animal protection laws and consequently does not recognize animals as sentient beings, able to perceive of feel things, therefore the animals will be treated as objects. In January 2015 one ton of live cats were seized in Hanoi, Vietnam, after being trafficked from China. The cats were unloaded from the truck, and still entombed in the bamboo cages, the loaded cages were laid out in a line on the road. This last truckload of cats were seized at midnight on Tuesday and the chickens the next morning. 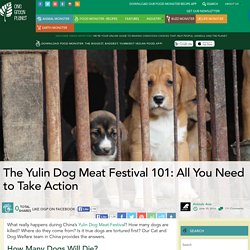 How many dogs are killed? Where do they come from? Is it true dogs are tortured first? Our Cat and Dog Welfare team in China provides the answers. How Many Dogs Will Die? At its height, the Yulin dog meat festival was said to be responsible for 10,000 to 15,000 slaughtered dogs. Is the Festival Just About Eating Dogs? The festival takes place to mark the summer solstice. Can the Government Stop It? Vietnam: One Ton of Cats & Chickens To Be Crushed Or Burnt – Fight Dog Meat. 1000 chinois manifestent contre la consommation de viande de chien à Hong Kong. Why the dog meat trade can’t survive. By Jill Robinson, Animals Asia founder With the Yulin dog meat festival about to take place, there has never been greater interest in the issue of dog meat eating in China. 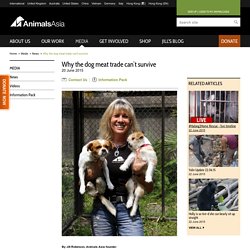 Last year we saw the local authorities distance themselves from the festival. This year unprecedented opposition has seen it hit the headline again. China’s Yulin Dog Meat Festival: Dogs and cats rescued as Ricky Gervais condemns event. Charity workers have managed to salvage or buy hundreds of dogs, cats and kittens – which have this year been added to the menu - from traders before they faced being cruelly beaten then killed. 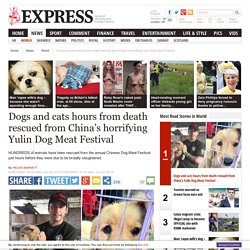 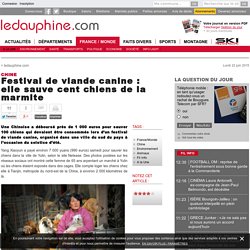 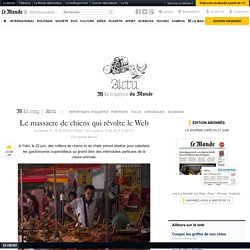 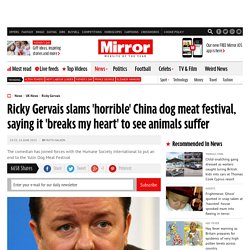 The actor has joined forces with the Humane Society International to put an end to the Yulin Dog Meat Festival. Up to 10,000 dogs and 10,000 cats are estimated to be killed each year during the barbarous event, which this year starts on June 22. In preparation for the festival, the Humane Society International has filmed thousands of animals, many of them pets still wearing collars, being seized from the streets. Page not found - Kim's Petitions.

Sans titre. The Illegal Dog Meat Festival That Nobody Is Stopping. Recent news out of China suggesting that officials have "banned" the Yulin dog meat festival has understandably given campaigners cause for hope. 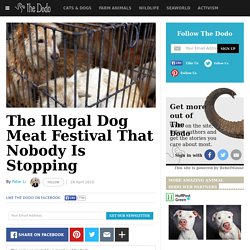 However, this announcement is not what it appears to be, and the hundreds of thousands of dogs — and cats —suffering in Yulin and other Chinese animal markets still need our help. Between 10 and 20 million dogs per year are believed to be killed for consumption in China, with live dog and animal markets all over the region, as well as many illegal dog slaughterhouses. The killing of dogs for meat in the Chinese city of Yulin in the South Western Guangxi province has gained international notoriety for the sheer volume of dogs involved and the local trader's unashamed promotion of dog eating as a local tradition. Chine : le Festival de la viande de chien de Yulin déchaine les polémiques. 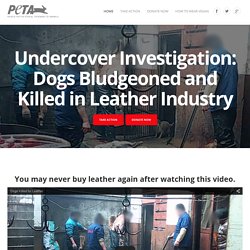 At the slaughterhouse, the investigator filmed workers as they grabbed one dog after another around the neck with metal pinchers and bashed them over the head with a wooden pole. Some dogs fell unconscious, while others cried out and writhed in agony. China Dog Skinned Alive. Please sign the Petition below objecting to China’s Dog Meat Consumption and Trade Shuangyashan HEILONGJIANG PROVINCE CHINA “26 November 2014 3.00 in the afternoon: Maomao is sold to a restaurant owner, after being stolen from her Loving Family that morning. 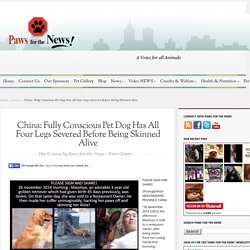 While fully conscious, the trusting loved pet who only knew kindness from her owners was tied to a pole and the dog butcher seized her left hind paw and began to slowly sawing through her fur and flesh and sinews, cutting tendons and veins and sawing into her bones as she screamed in agony, unable to save herself from this horror. Slipping in her own blood, she fell to the ground in blinding pain as her lower left leg was severed and tossed aside. The butcher was only using a small knife, which proves none of the cuts were clean cuts or rapid.

China: Fully Conscious Pet Dog Has All Four Legs Severed Before Being Skinned Alive. Shocking report out of China! A three-year old Golden retriever named Maomao (毛毛), who was a loved pet was stolen one week ago, in the morning. She had given birth to puppies only 45 days earlier. The stolen dog was then sold to a dog butcher/dog meat restaurant at 3pm on the same day, where unthinkable cruelty was deliberately inflicted upon her. WARNING: reader discretion advised. While fully conscious, the trusting loved pet who only knew kindness from her owners was tied to a pole and the dog butcher seized her left hind paw and began to slowly sawing through her fur and flesh and sinews, cutting tendons and veins and sawing into her bones as she screamed in agony, unable to save herself from this horror. The butcher begins to severed the pet dog’s other hind leg. PEUT-ON ENCORE L’APPELER UN ETRE HUMAIN ? !!! - Une Loi Pour les Animaux de Chine.

In the weeks leading up to Tet, families often renovate their home or at least give it a thorough clean. It is a definite “in with the new and out with the old” style of festival. In the days leading up to Tet, people buy new clothes to signify change, they change companies or line of work. NoToDogMeat / NoToCatMeat. Official Blog of NoToDogMeat Campaign.