23311 RecurringTransaction Whitepaper V4. Three-day working week 'optimal for over-40s' Image copyright AP Workers aged over 40 perform at their best if they work three days a week, according to economic researchers. 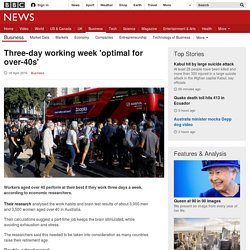 Their research analysed the work habits and brain test results of about 3,000 men and 3,500 women aged over 40 in Australia. Their calculations suggest a part-time job keeps the brain stimulated, while avoiding exhaustion and stress. The researchers said this needed to be taken into consideration as many countries raise their retirement age. Data for the study was drawn from the Household, Income and Labour Dynamics in Australia survey, which is conducted by the Melbourne Institute of Applied Economics and Social Research at the University of Melbourne. It looks at people's economic and subjective well-being, family structures, and employment. 32% 24% MANY ON-DEMAND ECONOMY. Ohlala, An Uber For Escorts, Launches In Berlin, Plans Global Rollout. Until now, “let’s meet” apps like Tinder have skirted the border between dating and simple sexual hookups. 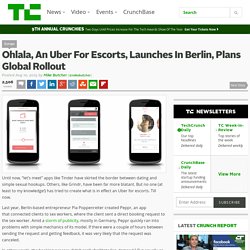 Others, like Grindr, have been far more blatant. But no one (at least to my knowledge!) Employee Engagement Isn't Getting Better And Gallup Shares The Surprising Reasons Why (with image) · Markle. The ‘gig economy’ is coming. What will it mean for work? Business Technology Trends Report 2015 - Accenture. Digital Business Era: Stretch Your Boundaries If your company is like most, over the last few years you have seen your top teams focused on leveraging social, mobile, analytics, and cloud (SMAC) to transform your enterprise into a digital business.

Today, the challenge has become: what will business leaders do with their digital advantage? It’s not a trivial question. Becoming a digital business is a massive transformation. The Uber-fication of everything: how Uber changed the world. Related topicsApplications Development Process Services Related articles Share article 138 4 2 23googleplus0 Short of time? 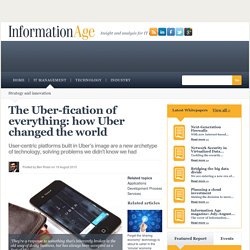 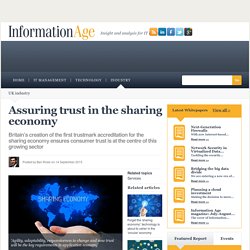 Helpling and Hassle.com join forces to form the world’s biggest home-cleaning marketplace. Helpling, the leading global platform for on-demand home services, has acquired Elevator Pitch winner Hassle.com in a deal that will see the pair become the clear leader for online booking of household services outside the U.S. 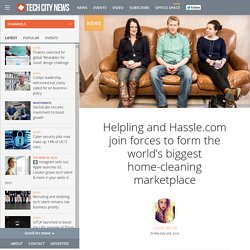 Benedikt Franke, co-founder of Helpling, said: “This partnership combines Hassle.com’s expertise with Helpling’s international footprint and access to capital. “It creates a very exciting global proposition and makes our combined company the strongest player in this space.” Alex Depledge, co-founder of Hassle.com, added: “Our goal from the beginning has always been to become a global domestic cleaning brand. “This strategic move takes us significantly closer to that goal.” On-Demand Cleaning Startup Hassle Merges With Rocket Internet’s Helpling. The on-demand cleaning space in Europe just got a little less messy. 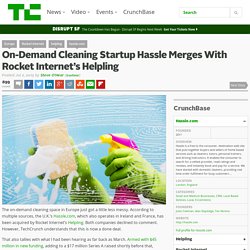 According to multiple sources, the U.K.’s Hassle.com, which also operates in Ireland and France, has been acquired by Rocket Internet’s Helpling. Both companies declined to comment. However, TechCrunch understands that this is now a done deal. That also tallies with what I had been hearing as far back as March. Armed with $45 million in new funding, adding to a $17 million Series A raised shortly before that, Helpling was believed to be embarking on an acquisition spree as means to further expansion, in what might be considered typical Rocket Internet fashion. The end of capitalism has begun. The red flags and marching songs of Syriza during the Greek crisis, plus the expectation that the banks would be nationalised, revived briefly a 20th-century dream: the forced destruction of the market from above.

For much of the 20th century this was how the left conceived the first stage of an economy beyond capitalism. AMAZON HOME SERVICES – THE MARKET OF YESTERDAY. Businessinsider. Are we living in a Freelance Economy? People are working in new and different ways in modern economies. 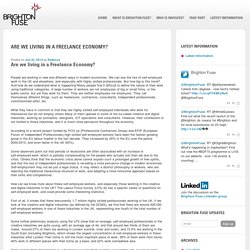 We can see the rise of self-employed work in the UK and elsewhere, and especially with highly skilled professionals. But how big is this trend? Here's The Startup Which Claims To Be The Airtasker Of Shopping, And Like eBay, But With Personality. Shaun Greenblo is an avid marathon runner. 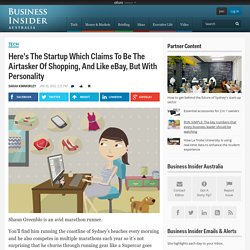 You’ll find him running the coastline of Sydney’s beaches every morning and he also competes in multiple marathons each year so it’s not surprising that he churns through running gear like a Supercar goes through brake pads. In the midst of training in 2010, Greenblo was calling his cousin Julian in Los Angeles every 2-3 months, asking him to buy more of his favourite Gel Kayano running shoes because they were much cheaper than in Australia. 20 Things I've Learned From Larry Page. I visited Google a few weeks ago and, after almost getting arrested, my mind was blown. 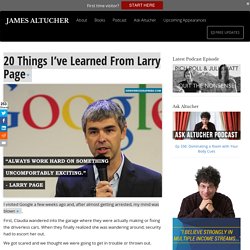 First, Claudia wandered into the garage where they were actually making or fixing the driverless cars. When they finally realized she was wandering around, security had to escort her out. We got scared and we thought we were going to get in trouble or thrown out. Then we met with a friend high up at Google and learned some of the things Google was working on. Nothing was related to search. A problem wasn’t considered worthy unless it could solve a problem for a billion people. So now Alphabet is aligning itself towards this strategy: a holding company that owns and invests in other companies that can solve billion person problems. Larry page middle management. CUZIN : businessinsider.com. TASKRABBIT : plans for an odd-job revolution. THUMBTACK : unnatural links on fstoppers. Thumbtack, a professional services website used by many freelance photographers, has received a "manual action" from Google which has caused the site to be removed from Google's search results and many photographers are feeling the effects.

A manual action is when Google steps in and manually alters the results of their algorithm and demotes or removes a site from Google's search. Thumbtack has been notified by Google's Search Quality team for using "unnatural links," which co-founder and president of Thumbtack, Jonathan Swanson confirmed on Monday. The removal from Google caused a massive decline in leads for professionals and prompted the company to send out an email to its network. Swanson told Search Engine Land, “...we do not now, nor have we ever, paid for links.” But as many blogs have pointed out, Thumbtack asks professionals to link to specific sections of their website in exchange for progress points to complete a user profile.