Everything Is Far from Here. On the first day, there’s a sense of relief. 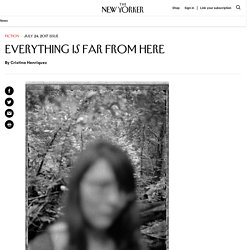 There are other feelings, too, but relief is among them. She has arrived, at least. After three weeks. After a broken sandal strap, sunburn on her cheeks, mud in her ears, bugs in her hair, blisters around her ankles, bruises on her hips, boiled eggs, bottled water, sour berries, pickup trucks and train cars and footsteps through the dirt, sunrises and sunsets, nagging doubt and crackling hope—she has arrived.

They tell her to sleep, but that can’t be right. He sent a friend to escort them. By morning, the men were gone, the children gone. “Where is my son?” “There’s a family unit,” one woman says, pointing down the hall. In the family unit, which is one large room, she searches every crib. 10 Outstanding Short Stories To Read in 2017. 18 Essays About The Immigrant Experience You Need To Read - BuzzFeed News. Someone Else Besides You by Viet Thanh Nguyen. My father’s girlfriend lived in a condo complex designed as a village, the stucco barracks scattered around a flat lawn spotted with barbecue pits, black with soot. 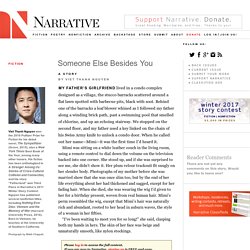 Behind one of the barracks a leaf blower whined as I followed my father along a winding brick path, past a swimming pool that smelled of chlorine, and up an echoing stairway. We stopped on the second floor, and my father used a key linked on the chain of his Swiss Army knife to unlock a condo door. When he called out her name—Mimi—it was the first time I’d heard it. Mimi was sitting on a white leather couch in the living room, using a remote control to dial down the volume on the television backed into one corner. She stood up, and if she was surprised to see me, she didn’t show it. “I’ve been waiting to meet you for so long!” Please log in to access the full content. Family Life, by Alejandro Zambra. Translated from the Spanish by Megan McDowell It’s not hot out, it’s not cold. 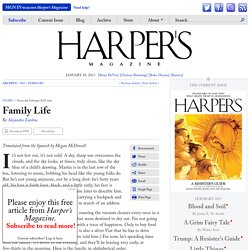 A shy, sharp sun overcomes the clouds, and the sky looks, at times, truly clean, like the sky blue of a child’s drawing. Martín is in the last row of the bus, listening to music, bobbing his head like the young folks do. Walking Out - David Quammen. As the train rocked dead at Livingston he saw the man, in a worn khaki shirt with button flaps buttoned, arms crossed. 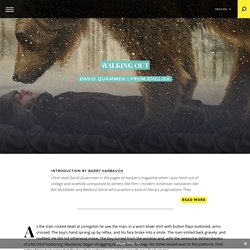 The boy’s hand sprang up by reflex, and his face broke into a smile. The man smiled back gravely, and nodded. He did not otherwise move. The boy turned from the window and, with the awesome deliberateness of a fat child harboring reluctance, began struggling to pull down his bag. The Most Moving Personal Essays You Needed To Read In 2016 - BuzzFeed News. 11 Fantastic Pieces Of Fiction From 2016 You Need To Read. Beattie snow. Issue No.4 EDITOR’S NOTE Dear Reader, We started... 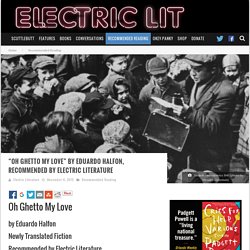 Inscape by Yaa Gyasi. And as I parted my lips and then, later, my legs, watching the last clouds of smoke slip upward, I kept hearing my mother’s voice say, “Jesus is a fire.” 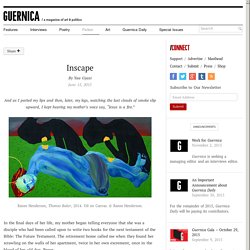 Ranee Henderson, Thomas Baker, 2014. Oil on Canvas. © Ranee Henderson. In the final days of her life, my mother began telling everyone that she was a disciple who had been called upon to write two books for the next testament of the Bible: The Future Testament. 65 Books You Need To Read In Your 20s. Hollow - Breece D'J Pancake. Hunched on his knees in front of the three-foot coal seam, Buddy was lost in the back-and-forth rhythm of the truck mine's relay: the glitter of coal and sandstone in his cap light, the setting and lifting and pouring into the cart that carried the stuff to the mouth of the mine. 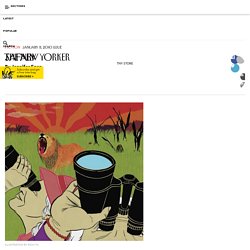 In Hawaii? When we went to the beach at night and it started to rain?” The Displaced Person.pdf. Wolff, Bullet in the Brain.pdf. Bettering Myself, Ottessa Moshfegh. My classroom was on the first floor, next to the nuns’ lounge. 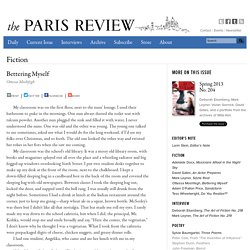 I used their bathroom to puke in the mornings. One nun always dusted the toilet seat with talcum powder. Another nun plugged the sink and filled it with water. I never understood the nuns. Rape Fantasies.pdf. Miranda July the Man in the Stairs. 14 Fantastic Stories From The New Yorker Archive You Should Read This Summer. Yrsa Daley-Ward. The Love That Will Be Ready Words by nayyirahwaheedWhen I first read this piece of work by Nayyirah Waheed, I immediately thought back to this past year, about how hard it was to give love to others while having enough left over for myself.And it gave me a lot of peace to read it. 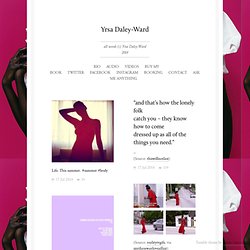 And to understand that the healing I have been working on for so long does not mean I am selfish has been revolutionary for me. To learn to love myself is revolutionary for me. Growing up in an Asian family, it has truly been a conflict to learn how to balance loving others while loving myself.I understand that having been left/abandoned means I was not ready. I left someone on the bridge, and someone left me on the bridge soon after. It takes time. Beautiful interpretation of this piece. beautiful artwork. i am both honored and eased, knowing that my words have brought this amazing artist peace. and that it has inspired their art. this is amazing. Kei Miller. I hate to admit this, especially as a queer black poet living in the UK, but I only discovered Kei Miller three years ago. 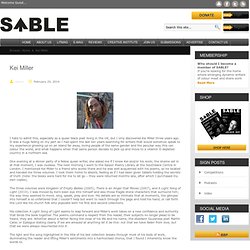 It was a huge failing on my part as I had spent the last ten years searching for writers that would somehow speak to my experience growing up on an island far away, loving people of the same gender and the peculiar way this can colour the world, and what happens when that same person decides to pick up and move to a vitamin D depleted country in a northern sea. The Thinker of Tender Thoughts: An illustration by Shel Silverstein, 1963. Free Rent At The Totalitarian Hotel. By Poe Ballantine Poe Ballantine lives in Chadron, Nebraska, and is the author of five books, most recently the true-crime memoir Love & Terror on the Howling Plains of Nowhere. His eleven-year-old son, Tom, reads books on his father’s iPad and deletes any that contain bad words, so Tom was happy to discover T.E.

Lawrence’s clean-living opus Seven Pillars of Wisdom, which he faithfully refers to as “Seven Caterpillars of Wisdom.” ON MONDAY mornings I modeled for the painters at an old cannery converted into art studios in Eureka, California. Rickey Laurentiis’s “On Komunyakaa’s Surprise” Cape Coast Castle by Yusef Komunyakaa “No tears in the writer, no tears in the reader,” Frost declared, and though I find myself still ashamed to cry, something about this adage sings to me, familiar, as from my mother’s rough alto. Boston Review. “My Good Man”—that was what she called him. Good for what? Was what most people asked, but all my ma would do was smile. He hung around a lot the spring and summer I was seven, and since he was strong enough to bring in a full kerosene can, she let him stay on through the winter.

A novel way to celebrate books and life. Podcast: Page-Turner. May 2, 2014. Let Us Tell You a Story. Sites/default/files/forms/stoneboy by Gina Berriault.pdf. A poem a day. Annotated transcript of Chimamanda Adichie: The danger of a single story in English. 20 Beautifully Illustrated Quotes From Your Favorite Authors. David Foster Wallace’s Required Reading. George Saunders, "Isabelle" - I Read A Short Story Today. Antonya Nelson: “First Husband” Eminent Domain. Akhil Sharma: “A Mistake” Standard Of Care. Tonight in a nursing home in the North End neighborhood of Boston, not far from where his family owns a restaurant, there is a man with the brain of a boy. Self-Made Man #26: Wild. 134+ Short Story Links in Honor of Short Story Month 2012 « Flash Fiction Chronicles. Thanks to all of you who suggested stories online (and off) that you love and want to share with others. This year we’ve reeled in 134 links to stories.

Sunday Rumpus Fiction: Nobody. “One Christmas Eve” by Langston Hughes. Langston Hughes (1902-1967) One Christmas Eve ~ A Classic American Short Story by Langston Hughes. "Glissando" by Katie Bellas. Maggie Appleton. Goodbye to All That, by Joan Didion : Julia Allison. David Rakoff in "This American Life: The Invisible Made Visible" Granta Magazine. Electric Literature's Recommended Reading. Lostcoindev.com/pipermail/class-list_lostcoindev.com/attachments/20090310/b9fe4368/attachment.pdf. Junot Diaz Talks About What Made Him Become a Writer.