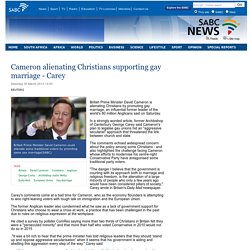 In a strongly worded article, former Archbishop of Canterbury George Carey said Cameron's plan to legalise gay unions hid an "aggressive secularist" approach that threatened the link between church and state. The comments echoed widespread concern about the policy among some Christians - and also highlighted the challenge facing Cameron whose efforts to modernise his centre-right Conservative Party have antagonised some traditional party voters. Carey's comments come at a bad time for Cameron, who as the economy flounders is attempting to woo right-leaning voters with tough talk on immigration and the European Union. . 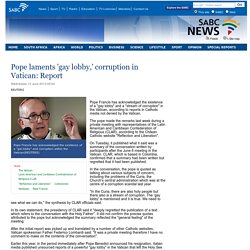 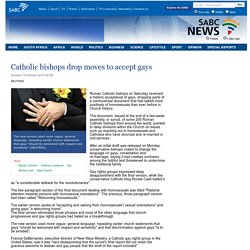 (REUTERS) Roman Catholic bishops on Saturday reversed a historic acceptance of gays, dropping parts of a controversial document that had talked more positively of homosexuals than ever before in Church history. The document, issued at the end of a two-week assembly, or synod, of some 200 Roman Catholic bishops from around the world, pointed to deep divisions within the Church on issues such as reaching out to homosexuals and Catholics who have divorced and re-married in civil services.

After an initial draft was released on Monday, conservative bishops vowed to change the language on gays, cohabitation and re-marriage, saying it had created confusion among the faithful and threatened to undermine the traditional family. UK Christianity poll points to mistrust of clergy:Sunday 31 March 2013. A poll indicates half of Britons think the church is wrong to oppose same-sex weddings. 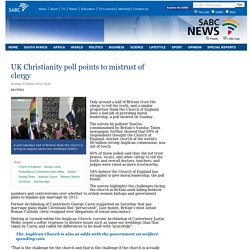 (SABC) Only around a half of Britons trust the clergy to tell the truth, and a similar proportion think the Church of England does a bad job of providing moral leadership, a poll showed on Sunday. The survey by pollster YouGov, commissioned by Britain's Sunday Times newspaper, further showed that 69% of respondents thought the Church of England, mother church of the world's 80-million-strong Anglican communion, was out of touch. 40% of those polled said they did not trust priests, vicars, and other clergy to tell the truth, and overall doctors, teachers, and judges were rated as more trustworthy. 54% believe the Church of England has struggled to give moral leadership, the poll found. Double life a norm for Ireland gay teachers:Wednesday 21 December 2011. Schools in Ireland can be hostile places for gay people, particularly the staff rooms. 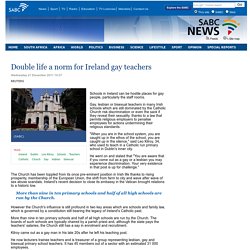 Gay, lesbian or bisexual teachers in many Irish schools which are still dominated by the Catholic Church risk discrimination or even the sack if they reveal their sexuality, thanks to a law that permits religious employers to penalise employees for actions undermining their religious standards. "When you are in the school system, you are caught up in the ethos of the school, you are caught up in the silence," said Leo Kilroy, 34, who used to teach in a Catholic run primary school in Dublin's inner city.

He went on and stated that "You are aware that if you come out as a gay or a lesbian you may experience discrimination. Your very existence in that post is up for challenge. " Gay couples tie the knot as same-sex marriage becomes legal in England:Saturday 29 March 2014. Gay couples across England and Wales celebrated on Saturday as they tied the knot at the stroke after midnight, following the legalisation of same-sex marriage last July. 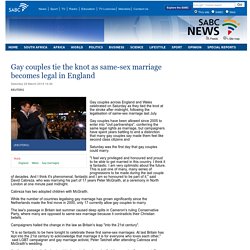 Gay couples have been allowed since 2005 to enter into "civil partnerships", conferring the same legal rights as marriage, but campaigners have spent years battling to end a distinction that many gay couples say made them feel like second class citizens and Saturday was the first day that gay couples could marry. "I feel very privileged and honoured and proud to be able to get married in this country. I think it is fantastic. I am very optimistic about the future. Cabreza has two adopted children with McGraith. Adl-Tabatabai who married Sinclair Treadway, from the US, in London's Camden City Hall. Gay community under attack in Liberia over Ebola outbreak:Thursday 23 October 2014. Religious leaders in Liberia said Ebola was a punishment from God for homosexuality. 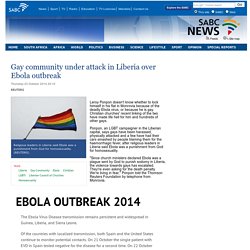 (REUTERS) Leroy Ponpon doesn't know whether to lock himself in his flat in Monrovia because of the deadly Ebola virus, or because he is gay. Christian churches' recent linking of the two have made life hell for him and hundreds of other gays. Ponpon, an LGBT campaigner in the Liberian capital, says gays have been harassed, physically attacked and a few have had their cars smashed by people blaming them for the haemorrhagic fever, after religious leaders in Liberia said Ebola was a punishment from God for homosexuality. "Since church ministers declared Ebola was a plague sent by God to punish sodomy in Liberia, the violence towards gays has escalated. Ebola has infected almost 10,000 people in West Africa since March, killing around half its victims.