How a Real Estate Investor Built a Thriving Social Network of 250K Users. If Google’s multiple failed attempts at building a social network that can compete with Facebook have shown us anything, it’s that creating a thriving online community is anything but simple. 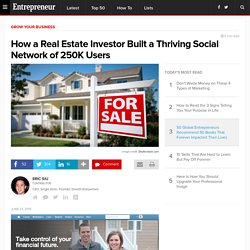 After all, if Google, with all the company’s resources and connections, can’t pull off a successful upset, what hope do smaller community builders have? It’s a good thing that real estate investor Joshua Dorkin didn’t let the past failures of other social network wannabes discourage him. YouTube Crashed This Entrepreneur's Website. Michael Dubin is the founder of Venice, California’s Dollar Shave Club, which boasts two million subscribers (who pay as little as $1 a month, plus shipping, for a monthly delivery of razors), $72.8 million in venture funding (plus an additional $75 million investment round, announced Monday, June 22), and annual revenue of $65 million. 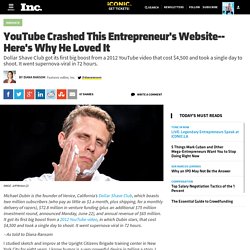 It got its first big boost from a 2012 YouTube video, in which Dubin stars, that cost $4,500 and took a single day to shoot. It went supernova-viral in 72 hours. --As told to Diana Ransom I studied sketch and improv at the Upright Citizens Brigade training center in New York City for eight years. I know humor is a very powerful device in telling a story. Real Close Shave Michael Dubin has expanded his product line to include men's hair-styling products; a print magazine, Bathroom Minutes; and wet wipes. We also announced our $1 million seed round of funding the day the video launched. Explore / #startups. Why, How, Where and When Entrepreneurs Make Money.

The final purpose of an entrepreneurial venture is to successfully establish a new business and generate windfall profits from it. 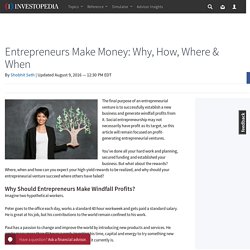 Social entrepreneurship may not necessarily have profit as its target, so this article will remain focused on profit-generating entrepreneurial ventures. You’ve done all your hard work and planning, secured funding and established your business. But what about the rewards? Where, when and how can you expect your high-yield rewards to be realized, and why should your entrepreneurial venture succeed where others have failed?

Why Should Entrepreneurs Make Windfall Profits? Imagine two hypothetical workers. Peter goes to the office each day, works a standard 40 hour workweek and gets paid a standard salary. Paul has a passion to change and improve the world by introducing new products and services. Clearly, the world would be a less dynamic place if there were only Peters and no Pauls around. Who do you think should get more credit for his contributions? The Super Simple Way I Grew My Email List Overnight Using ShortStack [Guest Post] - SociallyStacked SociallyStacked. Posted by Dana Kilroy on 20 Jan 2014 / 0 Comment By Kristina Allen A couple of months ago I launched a brand new e-commerce store that sells hand-poured, eco-friendly soy candles. 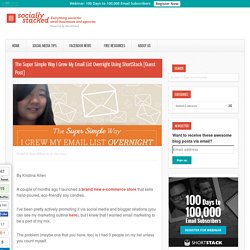 I’ve been pretty actively promoting it via social media and blogger relations (you can see my marketing outline here), but I knew that I wanted email marketing to be a part of my mix. The problem (maybe one that you have, too) is I had 0 people on my list unless you count myself. Instapaper. Top Tips for Marketing Your Startup, Part 2. More Startup Funding Is Available, But Who’s Getting It? Larry AltonCrunch Network Contributor Larry Alton is an independent business consultant specializing in social media trends, business, and entrepreneurship. 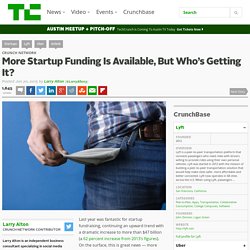 How to join the network Last year was fantastic for startup fundraising, continuing an upward trend with a dramatic increase to more than $47 billion (a 62 percent increase from 2013’s figures). On the surface, this is great news — more venture capitalists are pouring more money into startups, thereby increasing the amount of available resources for new ideas.

But the type of companies receiving this funding, and the way this funding is distributed, illustrate a system that prefers certain industries and certain types of ideas over others. How Is The Money Distributed? The trends dictating this increase in total available funding are actually complicating the nature of its availability. Popular consumer apps get all the attention, but the number of these ideas that actually get investments is relatively low. 'Fake It Until You Make It' Rarely Pays Off For Entrepreneurs - Forbes. The 4 Ingredients of Utah's Startup 'Secret Sauce' Utah’s Wasatch Front corridor has become “the next Silicon Valley”-or, as the locals call it, “Silicon Slopes.” 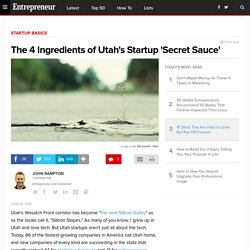 As many of you know, I grew up in Utah and love tech. But Utah startups aren’t just all about the tech. Today, 86 of the fastest-growing companies in America call Utah home, and new companies of every kind are succeeding in the state that recently ranked #4 for starting a business and #1 for entrepreneurs. Why has Utah become one of the best places for start-ups and business funding? The following four reasons can explain. 1. The University of Utah hosts the Utah Science, Technology, and Research Initiative, which I personally can vouch for as my alma mater. Related: How These Four Dads From Utah Quit Their Day Jobs to Make Millions on YouTube 2. You need money to start your business and sometimes you need help growing it, as did Pluralsight. There have been several other startups raising money in Utah as well. Don’t need quite that much money for your startup? 3. 4. The 4 Ingredients of Utah's Startup 'Secret Sauce'