Black Panther: The Young Prince by Ronald L. Smith. Lintang and the Pirate Queen by Tamara Moss - Penguin Books Australia. Lintang dreams of having adventures on the high seas. 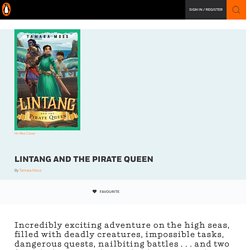 When a deadly mythie attacks the same day the infamous Captain Shafira visits her island, Lintang gets her chance, defending her village with a bravery that earns her a place on the pirate queen’s ship. But they’ve barely left the island when Lintang discovers her best friend, Bayani, has stowed away. Telling Captain Shafira means betraying her friend, but keeping Bayani’s secret risks everything . . . including their lives. 'A wonderful book with deliciously unexpected twists and turns, and the best pirate queen ever!

' Lian Tanner, bestselling author of THE KEEPERS'Combine a pirate adventure of mythic proportions, a uniquely charming cast of characters, and a vivid new fantasy world and you get Lintang and the Pirate Queen. 'Tamara Moss has created a rich and diverse world full of memorable characters and magical creatures. Island of the Blue Dolphins by Scott O'Dell. To the Lighthouse by Cristy Burne. Goodreads. Beetle Boy by M.G. Leonard. The Adventures of Alfie Onion by Vivian French. Royal Flying Doctor Service 1: Remote Rescue by George Ivanoff. Barney and the Secret of the Whales by Jackie French. Theophilus Grey and the Demon Thief by Catherine Jinks. Hat Trick! Toby Jones Books 1 - 3 - Michael Panckridge - Paperback.

The Secret of the Swords: Sword Girl Book 1. The first book in a fun and exciting series by award-winning author Frances Watt and Kate Greenaway Medal winner Gregory Rogers, introducing Tommy - a feisty kitchen hand who longs to be a knight. 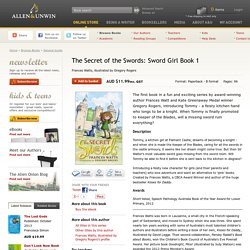 When Tommy is finally promoted to Keeper of the Blades, will a missing sword ruin everything? Tommy, a kitchen girl at Flamant Castle, dreams of becoming a knight - and when she is made the Keeper of the Blades, caring for all the swords in the castle armoury, it seems like her dream might come true. But then Sir Walter's most valuable sword goes missing from the sword room. Will Tommy be able to find it before she is sent back to the kitchen in disgrace? Introducing a feisty new character for girls (and their parents and teachers) who love adventure and want an alternative to 'pink' books. Short-listed, Speech Pathology Australia Book of the Year Award for Lower Primary, 2012 Gregory Rogers was the first Australian to be awarded the prestigious Kate Greenaway Medal. Battle Boy: Open Fire (Battle Boy, #1) by Charlie Carter. Emily Eyefinger (Emily Eyefinger, #1) by Duncan Ball. Code Crimson (Arkie Sparkle, Treasure Hunter, #1) by Petra James.

Death Diamond, Dragon Blood Pirates Series : Book 1 by Dan Jerris, 9780734410719. Buy this book online. Click on the Google Preview image above to read some pages of this book! 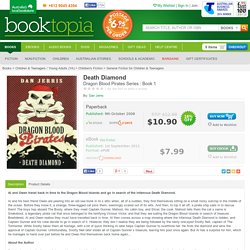 Al and Owen travel back in time to the Dragon Blood Islands and go in search of the infamous Death Diamond. Al and his best friend Owen are peering into an old sea trunk in Al s attic when, all of a sudden, they find themselves sitting on a small rocky outcrop in the middle of the ocean. Before they know it, a strange, three-legged cat joins them, seemingly scared out of its wits. And then, to top it all off, a pirate ship sails in to rescue them! The boys hop aboard The Booty, where they meet Captain Gunner, Mahoot, his cabin boy, and Slicer, the cook. About the Author Dan Jerris passion for the sea-faring world came about from his many adventures on the high seas; meeting sharks face-to-face, sailing over dangerous reefs, and being held at gunpoint near an island where pirates still roam. 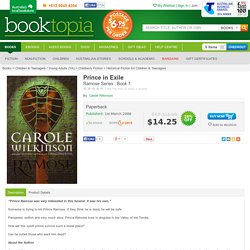 “Prince Ramose was very interested in this funeral. It was his own.” Someone is trying to kill Prince Ramose. If they think he is dead, he will be safe. Pampered, selfish and very much alive, Prince Ramose lives in disguise in the Valley of the Tombs. How will this spoilt prince survive such a brutal place? Can he outwit those who want him dead? About the Author Carole Wilkinson is an award-winning author of books for children. ISBN: 9781921167058 ISBN-10: 192116705X Series: Ramose Series Audience: Children For Grades: 4 - 5 Format: Paperback Language: English Number Of Pages: 136 Published: 1st March 2006 Publisher: Black Dog Books Country of Publication: AU Dimensions (cm): 21.000 x 14.000 x 1.200 Weight (kg): 0.185 Edition Number: 1. The Kensington Reptilarium by N.J. Gemmell. The Gypsy Crown by Kate Forsyth. Jaguar Warrior by Sandy Fussell.