The big issue: Penelope Cruz edits Vogue 'plus-size' edition. In the heady world of high fashion, few issues have ruffled feathers as much in recent months as that of size. 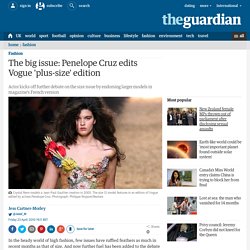 And now further fuel has been added to the debate about the use of larger models thanks to an edition of Vogue edited by the actor Penelope Cruz. Cruz was chosen to edit the French edition of the title and has promptly waded in with a provocative shoot that stars the size 14 model Crystal Renn in photographs styled by the magazine's influential editor, Carine Roitfeld. Cruz's intervention comes at a key moment within the industry for models with body shapes more akin to those of the majority of women. Last month, a special "curvy" edition of French Elle lavished praise on cover girl Tara Lynn's "adorable belly fat".

And two months ago a Louis Vuitton show, entitled And God Created Woman, cast curvaceous older models such as 46-year-old Elle MacPherson and 31-year-old Laetitia Casta in starring roles on the Paris catwalk alongside the more usual ultra-slim, teenage models. Appearance bullying – and the damage it does to children’s education.

Marcus Powell was a cheerful, happy-go-lucky child with a circle of good friends in the reception class at Trinity primary school in Hereford. 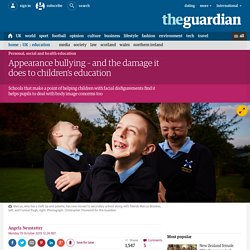 His classmates seemed not to notice the side of Marcus’s face, described by his mother, Sam, as “looking as though a trench goes right down it”. Marcus was born with a cleft lip and palate so has a gap in his lip and the roof of his mouth. The 15 operations he has needed have not helped the way he looks, but that had not concerned him. Everything changed, though, when Marcus moved up a year and the children became more conscious of his disfigurement. “It was as though suddenly they saw me differently,” says Marcus, who is now 11. Sam watched as her son became withdrawn and upset when it was time to go to school. It was a similar story for Yasmin at secondary school. Barbie, sexualisation and body image: the debates rage on.

It was a warm Berlin afternoon a year ago today when I was welcomed through a car park, past a 10ft stiletto, and into the life-size Barbie Dreamhouse.

I remember inhaling that strawberry scent of new plastic and the mingling vanilla from a pavement peanut vendor, and thinking: "This is the smell of pink. " As a child I didn't care about Barbie, so my interest in the brand, and the conversations around it, has been fairly detached, objective, a lifeguard watching from one of those tall chairs. If you care about the things I do, like girls and body image, then you can't escape her, her huge tanned eyes illustrating magazine pieces, her dismembered torso the cover of a hundred post-feminist theses.

There is a rise and fall in reports on her proportions creating unrealistic body standards, her whiteness, her role in the fight against the pink aisle, against gendered toys, a tide always lapping at the beach. Lori maintained that Barbie was an aspirational, creative outlet. Barbie’s Sports Illustrated Swimsuit Issue Causes a Stir Online. TWO familiar brands that have for decades been the targets of complaints about their depictions of women have joined forces for a promotional campaign that tells critics they are proudly “unapologetic” about who they are. 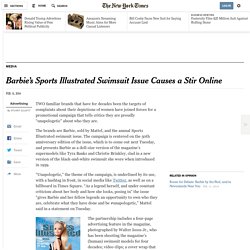 Register Of All-Party Groups as at 30 July 2015 : Body Image. Why is a size-six woman too big to model clothes, demands Tory MP. She has been accused of being an apologist for obesity, attacked for her own body size, been snubbed by Victoria Beckham and been the recipient of at least one angry letter from a leading model agency. 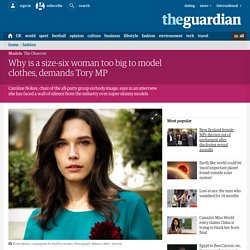 But Conservative MP Caroline Nokes says she has become more passionate, rather than less, to take on the “arrogant” fashion industry and is determined to take her cause to the very heart of government policy – and she has no qualms about bringing the full force of legislation with her. Nokes is the latest public figure to take up the long-running battle to persuade designers, fashion houses, retailers and modelling agencies to take more responsibility in how they represent the female form and to stop the widespread use of underage and underfed models on the catwalks, on advertising hoardings and in glossy magazines.

“They all got our letters. But they are either too scared or too arrogant to engage in a conversation,” she says. “This is not a confrontation, this is a debate.