THE BRITISH LIBRARY - The world's knowledge 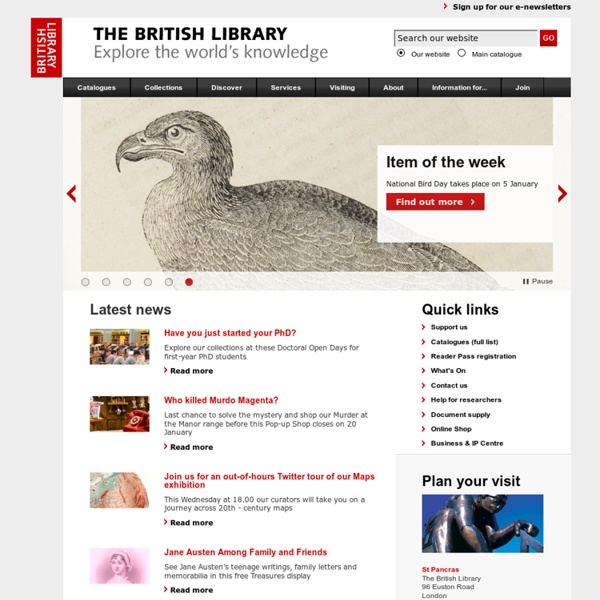 Online Collections and Presentations The Library provides access to a portion of its audio collections through the Recorded Sound Reference Center's web page, the American Memory site, The Performing Arts Encyclopedia and the American Folklife Center pages. These collections are described below. To listen to recordings that are unavailable online, contact the Recorded Sound Reference Center. Setting: Using Scene To Enrich Your Writing In both fiction and nonfiction, the setting is the general background against which your story takes place—the physical location and time period, both of which influence your characters and plot. So how can a creative writer use setting and scenery to further offset, augment, or reflect the action of the plot? Although we’re going to be exploring this issue in terms of fiction, these techniques work for nonfiction as well.

Books - ArtsBeat Blog The Audiobook of the Year is not a book. The Audio Publishers Association announced the winners of its 2015 Audie awards at a gala in New York City on Thursday evening. The top award went to “Mandela: An Audio History,” a gripping documentary with first-person interviews and archival recordings. Audio-Visual Conservation (Library of Congress Packard Campus, Culpeper, Virginia) || The Packard Campus || Located at the foothills of the Blue Ridge Mountains in Culpeper, Virginia, the Library's newly completed Packard Campus of the National Audio-Visual Conservation Center provides underground storage for this entire collection on 90 miles of shelving, together with extensive modern facilities for the acquisition, cataloging and preservation of all audio-visual formats. The Packard Campus was created through a unique partnership between the Packard Humanities Institute, the United States Congress, the Library of Congress, and the Architect of the Capitol. Learn more about The Packard Campus

World-building I’ve been busy worldbuilding this week. It’s one of my favorite things to do in the process of writing sci-fi, and it makes me all giddy and drooly like a kid that’s been dropped into a toybox. Since I revisited my collected materials for the worlds I’m writing in, and have overhauled one of these entirely, I grabbed the opportunity to put together a list of important worldbuilding questions to share with you. Not every author goes about worldbuilding the same way — and that’s perfectly fine, since not every genre needs it, and not every story is focused primarily on the setting. Also, not all aspects of a world or society are equally relevant to that particular plot.

The 25 Best Websites for Literature Lovers It’s an interesting relationship that book lovers have with the Internet: most would rather read a physical book than something on an iPad or Kindle, and even though an Amazon purchase is just two or three clicks away, dedicated readers would rather take a trip to their local indie bookstore. Yet the literary world occupies a decent-sized space on the web. Readers, writers, publishers, editors, and everybody in between are tweeting, Tumbling, blogging, and probably even Vine-ing about their favorite books. In case the demise of Google Reader threw your literary Internet browsing into a dark void, here’s a list of 25 book sites to bookmark. Browse - TAMI Browse for Videos by Topic Not sure what you're looking for? Start out by exploring the categories below for footage from your hometown, to see what Texas looked like in the past, or check out some of your favorite Texas icons. Genre, or Film Type At TAMI, "genre" describes more than the categories of feature films that we all know and love, such as western, action, or comedy. Our collections contain a whole range of moving image production types, from advertisements to government films to home movies. What type of film do you want to watch today?

Using Pictures as Writing Prompts Choose one of these images to use as a writing prompt for a freewriting session. Ideally, you'll develop one of the ideas generated by your freewriting session into a short story. A reader named Adam C. described how this played out for him in a creative writing class in which each student was given a different photo to write about. EBSCOhost Latest News & Events Latest Articles Technology & Services

Smithsonian Libraries : Free Books : Free Texts : Download & Streaming Smithsonian Libraries America : being the latest, and most accurate description of the New World : containing the original of the inhabitants, and the remarkable voyages thither : the conquest of the vast empires of Mexico and Peru, and other large provinces and territories, with the several European plantations in those parts : also their cities, fortresses, towns, temples, mountains, and rivers : their habits, customs, manners, and religions : their plants, beasts, birds, and serpents : with an appendix containing, besides several other considerable additions, a brief survey of what hath been discover'd of the unknown south-land and the Arctick region by Ogilby, John, 1600-1676; Montanus, Arnoldus, 1625?-1683 texts eye