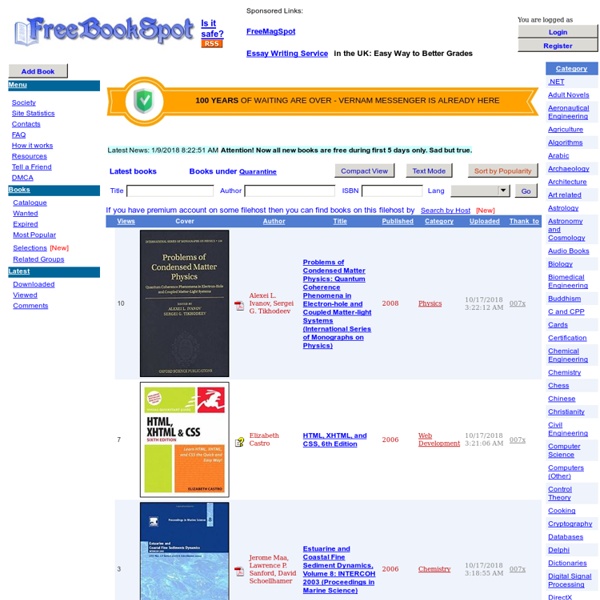 Related:  Téléchargements • EBOOKS 2 • The Tree of Everything • Thinking thinkers

30+ Best Websites to download free E-books I believe that reading is the best and simplest way for human to derive and construct a particular knowledge from a source. It would be good if we’re able to download free e-book and keep it with us.You might be surprised by how many good free ebook sites there are out there. Nowadays, you can find many popular and non-popular books online. People just need to know where to download.That’s why we’ve crawled deep into the Internet world to compile this list of Best Websites to download free E-books for your use. 1.20200k A mass directory for free online books and free ebooks and have a big collections of ebooks in different categories like Art,photography,Spirituality,Science,mystery and thrillers etc…

Seven Wonders of the Ancient World The Seven Wonders of the World (or the Seven Wonders of the Ancient World) refers to remarkable constructions of classical antiquity[1] listed in an Eurocentric way by various authors in guidebooks popular among the ancient Hellenic tourists, particularly in the 1st and 2nd centuries BC. The most prominent of these, the versions by Antipater of Sidon and an observer identified as Philo of Byzantium, comprise seven works located around the eastern Mediterranean rim. The original list inspired innumerable versions through the ages, often listing seven entries. Of the original Seven Wonders, only one—the Great Pyramid of Giza, the oldest of the ancient wonders—remains relatively intact.

Perception Since the rise of experimental psychology in the 19th Century, psychology's understanding of perception has progressed by combining a variety of techniques.[3] Psychophysics quantitatively describes the relationships between the physical qualities of the sensory input and perception.[5] Sensory neuroscience studies the brain mechanisms underlying perception. Perceptual systems can also be studied computationally, in terms of the information they process. Perceptual issues in philosophy include the extent to which sensory qualities such as sound, smell or color exist in objective reality rather than in the mind of the perceiver.[3] The perceptual systems of the brain enable individuals to see the world around them as stable, even though the sensory information is typically incomplete and rapidly varying. Human and animal brains are structured in a modular way, with different areas processing different kinds of sensory information.

How to download e-books from mIRC Before we got torrents, P2P and even before Napster, mIRC was the best place where you could get lots of movies, apps and mp3’s for free. It’s not an easy thing to use for downloading but once you get the hang of it, you’ll learn of its benefits. I’m an avid user of mIRC back in college and I still have it installed in my machine for the occasional hard-to-find mp3’s and for e-books. Gravity (comics) Gravity (Greg Willis) is a fictional comic book superhero appearing in books published by Marvel Comics. He first appeared in Gravity #1 (August 2005) and was created by Sean McKeever and Mike Norton. Gravity's first appearance was in his own limited series: Gravity #1-5 (2005), later released as a digest-formatted graphic novel as part of the Marvel Next imprint aimed at younger readers. In the same year, Gravity was featured in Marvel Holiday Special (2005) in a minor role. Greg Willis is born and raised in Sheboygan, Wisconsin. During the summer after his high school graduation, while on board his family's yacht, Greg is sucked into a mysterious black hole.