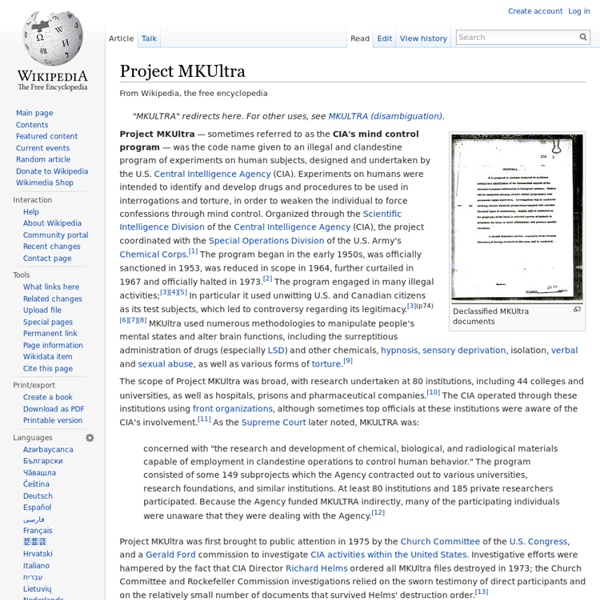 Declassified MKUltra documents Project MKUltra — sometimes referred to as the CIA's mind control program — was the code name given to an illegal and clandestine program of experiments on human subjects, designed and undertaken by the U.S. Central Intelligence Agency (CIA). Experiments on humans were intended to identify and develop drugs and procedures to be used in interrogations and torture, in order to weaken the individual to force confessions through mind control. Organized through the Scientific Intelligence Division of the Central Intelligence Agency (CIA), the project coordinated with the Special Operations Division of the U.S. concerned with "the research and development of chemical, biological, and radiological materials capable of employment in clandestine operations to control human behavior." Project MKUltra was first brought to public attention in 1975 by the Church Committee of the U.S. Background[edit] Dr. Precursor experiments[edit] MKUltra[edit] Goals[edit] Drugs[edit]

Mind Control in the 21st Century—Science Fiction and Beyond … by Steven DiBasio [ Editors Note: Dear Readers, we have a special treat for you today, a mjajor piece of work. I won't lead any of the enjoyment so I will let you jump right in. Steven is a writer, attorney, and sometime musician. He lives in the Midwest. And more will be on the way... No, these photos do not show ‘human meat’ used in canned foods Photos that appear to show bloody human bodies in plastic packaging have been shared tens of thousands of times in a Facebook post that claims “human meat” is being used in canned foods outside the Philippines. The post, which also contains other pictures purporting to show human flesh, is misleading; the images are actually from a vegan protest and a promotional event for a video game. The photos shared in this Facebook post show people smeared with a red liquid that looks like blood and wrapped in what resembles supermarket meat packaging. The post, which has been shared more than 133,000 times since it was published on August 14, 2017, also includes images of tinned tuna and what looks like meat in the shape of a person. Below is a screenshot of the post:

The Gaga Code: Top Ten Signs Lady Gaga Is a Pawn of Occult Forces - Los Angeles - Music Last Summer, the Vigilant Citizen blog--a website devoted to trolling gullible morons into getting riled up about supposed "occult" messages everywhere investigating the hidden symbols all around us--started analyzing the symbology of Lady Gaga and concluded that there is plentiful evidence that the "Pokerface" singer is, in fact, "a puppet of the Illuminati." Over the course of three probing articles (here, here, and here), the Vigilant Citizen researchers unveiled their findings, which we've summarized for you as a handy Top Ten list. Oh, and don't forget to read the comments on the VC site where the Dan-Brown-brainwashed (aka "Brownwashed") conspiracy nuts and the Gagaphiles go at each other regarding the Lady's occult status. click to enlarge Markus Klinko & Indrani for Hello Kitty!

www.yalelawjournal abstract. The Supreme Court often claims that the First Amendment reflects an original judgment about the proper scope of expressive freedom. After a century of academic debate, however, the meanings of speech and press freedoms at the Founding remain remarkably hazy. Many scholars, often pointing to Founding Era sedition prosecutions, emphasize the limited scope of these rights. Five Incredible—and Real—Mind Control Applications Scientists achieved the first remote human-to-human brain interface this week, when Rajesh Rao sent a brain signal over the Internet that moved the hand of colleague Andrea Stocco—even though Stocco was sitting all the way across the University of Washington's campus. Using one human brain to direct another person's body via the Internet was an amazing breakthrough. But other feats of mind control are already realities, particularly in the realm of human machine interfaces (HMIs). Here are some amazing examples of what our brains can already do. Compose and Play Music Yes, music composition always took place in the brain.

Sustainable Brands Madrid Sustainable Brands Madrid When you think of activists, it is quite probable that a dusty image of “peace and love” hippies marching springs to mind. But times have changed and a new kind of activism is stepping into today’s world. Creative activists, like their predecessors, actively campaign for a social cause. However, the former ones are inspired to use the Arts and the Media to create and develop general awareness of crucial issues, and engage citizens to be actively involved in fighting for a given cause. Therefore, the modern trend of creative activism is not a replacement but a tool that can be used in order to make campaigns more effective.

Project Monarch: Nazi Mind Control - The Evolution of Project MKULTRA by Ron Patton from ThinkAboutIt Website Amidst the subtle cerebral circumvention of the gullible populace, through a multitude of manipulated mediums, lies one of the most diabolical atrocities perpetrated upon a segment of the human race; a form of systematic mind control which has permeated every aspect of society for almost fifty years. To objectively ascertain the following, one may need to re-examine preconceived ideologies relating to the dualistic nature of mankind. Resolving the philosophical question of whether we are inherently good or inherently evil is tantamount in shaping our perception of reality; specifically, the spiritual variable within the equation of life.