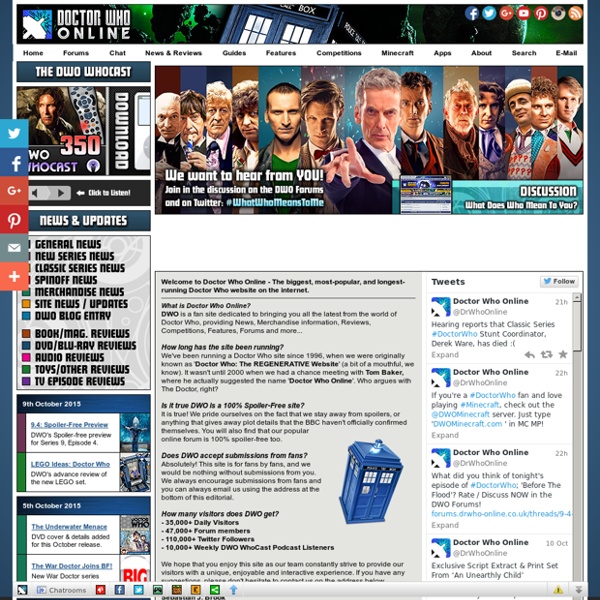 David Tennant Prior to playing the Doctor, Tennant also portrayed several characters in various Big Finish Audio Adventures. Biography Edit Before Doctor Who Edit David grew up in Ralston, Renfrewshire, where his father was the local minister, and later Moderator of the General Assembly of the Church of Scotland. Moving to London in the early 1990s, Tennant lodged with comic actress and writer Arabella Weir, with whom he became close friends and later godfather to one of her children. Doctor Who He has also parodied the Doctor on several occasions, such as in a Comic Relief skit with future companion Catherine Tate, a Dead Ringers skit in which he portrayed a "regenerated" Tony Blair, and as the Doctor himself in the final episode of Extras. In January 2006, Tennant took a one-day break from shooting Doctor Who to play Richard Hoggart in a dramatisation of the 1960 Lady Chatterley's Lover obscenity trial. After Doctor Who

Doctor Who British science fiction TV series The show is a significant part of British popular culture,[2][3] and elsewhere it has gained a cult following. It has influenced generations of British television professionals, many of whom grew up watching the series.[4] Fans of the series are sometimes referred to as Whovians. The programme is listed in Guinness World Records as the longest-running science fiction television show in the world,[5] as well as the "most successful" science fiction series of all time, based on its overall broadcast ratings, DVD and book sales, and iTunes traffic.[6] Premise History —Philip Hinchcliffe, producer of Doctor Who from 1974 to 1977, on why the "classic series" eventually fell behind other science fiction in production values and reputation, leading to its cancellation.[12] Licensed media such as novels and audio plays provided new stories, but as a television programme Doctor Who remained dormant until 2003. Public consciousness Episodes Missing episodes Characters

David Tennant, famous people from Bathgate. Born in Bathgate, Edinburgh and the LothiansBorn on 18th of April 1971 Scottish film, television and theatre actor. Best known for his role as the tenth incarnation of the Doctor in Doctor Who, also played the title role in the TV serial Casanova. More famous Britons here Contributors: Do you have a site related to David Tennant? 1740 views since 19th January 2011 Doctor Who review: 'Heaven Sent' is a mind-bending masterpiece ​"Let me be brave," whispered a doomed Clara Oswald last week. She could take a tip from BBC One - it requires balls to air one of Doctor Who's most experimental, risky and downright odd episodes to date on a Saturday evening in the wake of gushy glitter-fest Strictly Come Dancing. 'Heaven Sent' is an adventure so deliberately dark and obtuse that it's practically begging for a divided reaction. What's known in 'the industry' as a single-hander, it features no (major) speaking parts other than Peter Capaldi's Time Lord. But writer Steven Moffat cleverly subverts the expectation that this'll be a low-budget escapade, with a surplus of Capaldi awkwardly expressing his inner thoughts aloud. There's plenty of the Doctor 'talking to himself', true enough, but there's always a reason. Early on, he's tough-talking the unseen presence that's brought him to this "killer puzzle box" in the middle of a vast ocean. There's the impossibly quick thinking that allows him to escape certain death.

Les McKeown - BCR Bay City Rollers After joining the Bay City Rollers in November 1973, the band, with Les McKeown on lead vocals, shot to superstardom. "Remember", the Rollers' first single with Les McKeown's vocals, shot up the UK charts to No. 6 and was quickly followed by "Shang-A-Lang", "Summerlove Sensation" and "All Of Me Loves All Of You" all hitting the Top Five. "Bye Bye Baby" was their first UK Number One in May 1975 followed by "Give A Little Love" in July. Their first US single, "Saturday Night", went straight to the top number 1 spot of the Billboard charts, and their first British album, "Rollin'" was the first debut album to top the number 1 position in the charts. After leaving the Bay City Rollers in 1978, The Rollers quickly disappeared from public eye. Drawing on the overwhelming response of the BCR reunions, the band Les & Pat, recorded their first studio LP in seven years, 'Breakout'. 1974: Rollin' 1974: Once Upon A Star 1975: Wouldn't You Like It?

2015 Twelfth Doctor Novels Plot synopses and cover art has been released for the next three New Series Adventures novels featuring the Twelfth Doctor. The stories are Big Bang Generation, Deep Time and Royal Blood written by Gary Russell, Trevor Baxendale and Una McCormack, respectively All three are currently due for release on 10 September 2015. An audio version of each will follow 5 November 2015. Big Bang Generation By Gary Russell. “I’m an archaeologist, but probably not the one you were expecting.”Christmas 2015, Sydney, New South Wales, Australia.Imagine everyone’s surprise when a time portal opens up in Sydney Cove. Deep Time By Trevor Baxendale. ‘I do hope you’re all ready to be terrified!’ Royal Blood By Una McCormack. “The Grail is a story, a myth! [Thanks to Adam.]

The Future of the Paternoster Gang David Selby ponders where things could head next for the trio. Series Eight, it seems, will see changes to most of the show’s status quo: the Doctor has lost his title as the Last of the Time Lords and has taken on a newer, more capricious incarnation, changing his dynamic with the companion; the Siege of Trenzalore is over and the Silence would appear to be a thing of the past, and even smaller changes, such as a redly-lit, bookshelf-filled TARDIS console room only represent the greater shifts in the show as a whole. Yet moving onto a new era, the show-runner has decided to keep the Paternoster Gang: a broad label referring to the characters of Madame Vastra, the ‘Great Detective’ of Victorian London, her human wife, Jenny Flint and their unconventional butler, Sontaran Commander Strax. At present, there is abundant potential in the Paternoster Gang. The Great Detective “You realise Doctor Doyle is almost certainly basing his fantastical tales on your own exploits? Hyde and Seek Culture

Theory:Timeline - River Song Limiting factors Edit to be added Series basics For the sake of clarity, her first incarnation will be referred to as "little girl" or "baby" to differentiate from her second, referred to as "Mels", and her third, which dominates her appearances in the Doctor Who universe. Timeline As a three-week-old baby. As a little girl, she leaves a distressed voice message for President Nixon in 1969. As a little girl in 1969 and 1970. Set decades after Day of the Moon. Mels fought Krampus and his minions during Year Three at Leadworth Primary School. Mels is shown as aging alongside her parents, appearing as a teenager and later a young adult. GAME: The Eternity Clock The first entry in River's diary is made the morning after she's admitted to the hospital. In the year 5123, River enrolls at Luna University. River finishes her doctorate and is taken prisoner by Madam Korvarian and the Silence. The Wedding of River Song directly follows Closing Time. GAME: The Eternity Clock * River is not yet a professor.

Doctor Who Doctor Who: The Time War - Illuminating the Dark Age Everything we’ve learned about the Doctor’s darkest hour. By Oli SmithWith the Day of the Doctor fast approaching, Doctor Who's 50th Anniversary special appears to be gearing up to answer one of the show's biggest mysteries. Find Out How You Can See the 50th Anniversary Doctor Who Special in Theaters! After an absence of nearly 10 years, the Doctor returned to our screens in 2005 with a whole heap of newly acquired baggage and it wasn’t long before hints as to what had transpired during his absence began to trickle into the series. His people, the Time Lords, were dead, wiped out in an apocalyptic war against the Daleks that resulted in the total and utter destruction of both races at the hands of the Doctor himself. What exactly happened is something the Doctor has, understandably, never been too keen to elaborate on and it’s only through the tales of other survivors that we are able to piece together any kind of picture of the events of the Last Great Time War. The Beginning Who Was There?

River Song’s Timeline - Features - The Doctor Who Site The Universe, River Song and the Doctor, three completely different timelines, click an event to match them up. A Good Man Goes To War I was born in battle on an asteroid called Demons Run. I was the daughter of Amy Pond and Rory Williams. They named me Melody Pond. The Impossible Astronaut/Day of the Moon I was kidnapped, taken by Kovarian servant of the Silent to an orphanage on Earth. I was raised with only one purpose, to kill the Doctor. I escaped the space suit and lived on the streets homeless, alone and dying until I regenerated. Let’s Kill Hitler I became the best friend of young Amy and Rory. And then I regenerated into a new form I was the woman that would become River Song, although I didn’t know that at the time. I was trained and conditioned for one purpose, I was born to kill the Doctor, and I did so with a kiss. But I was shown who River Song would be and I saw just how much I would love him. And in return he left me the most wonderful gift. Let’s Kill Hitler/Closing Time Ok.

List of Doctor Who audio plays by Big Finish This is a list of audio plays based on the long-running British science fiction television series Doctor Who produced by Big Finish Productions.[2] The first fifteen audio plays were released in both audio tape and CD format, and subsequent releases have been on CD only. The audio plays have also been made available as downloads. Cast[edit] So far, productions have featured the Fifth (Peter Davison), Sixth (Colin Baker), Seventh (Sylvester McCoy) and Eighth Doctor (Paul McGann). Mary Tamm (along with Ward, Jameson and Leeson) appeared in the Gallifrey dramas. Content[edit] Charley, C'rizz, Lucie, Tamsin and Molly were all mentioned by Paul McGann as the Eighth Doctor in the 50th Anniversary mini-episode The Night of the Doctor, thus making them legitimate television companions and removing the canonical question as far as that part of the range is concerned. Broadcast[edit] On January 2007, a new series of Eighth Doctor audio adventures was broadcast on BBC7. Doctor Who[edit] Series 1[edit]

An Interrupted Vacation, a doctor who fanfic River reclined slowly in her beach chair. She was relaxing on one of the many beaches on Apalpucia. A lovely cocktail and a book, which had been recommended by her mother, were the perfect complements to what was turning out to be a delightful day. She had been catching her journal up on her recent travels to Callioption. "Hello, River" The Doctor murmured with that mischievous smile that always sent her heard into a frenzy. "You're not going to like that," River teased, gesturing to the fruity drink in his hands. "How can you drink this?" "Oh please," River said mockingly, "you're acting as though I've tried to poison you" "Wouldn't be the first time," he muttered, putting her drink back gingerly from where he'd taken it. "Now sweetie, I thought we didn't talk about all the times I've tried to kill you" River said in a flirtatious tone. "Oh my little psychopath," he responded, laughing under his breath "when aren't you trying to kill me?" "Fair point." "Well then?" He grinned. "Me?"