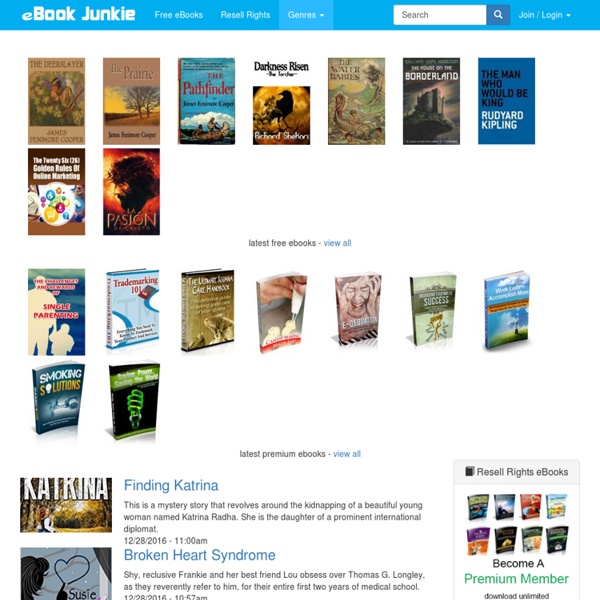 20 Best Websites To Download Free EBooks We understand that reading is the simplest way for human to derive and constructing meaning in order to gain a particular knowledge from a source. This tendency has been digitized when books evolve into digital media equivalent – E-Books. It would be nice if we’re able to download free e-book and take it with us. That’s why we’ve again crawled deep into the Internet to compile this list of 20 places to download free e-books for your use. Great Websites to Download Ebooks FreeBookSpot Second death The second death is an eschatological concept in Judaism and Christianity related to punishment after a first, natural, death. Judaism[edit] Although the term is not found in the Hebrew Bible, Sysling in his study (1996) of Teḥiyyat ha-metim (Hebrew; "resurrection of the dead") in the Palestinian Targums identifies a consistent usage of the term "second death" in texts of the Second Temple period and early Rabbinical writings. In most cases this "second death" is identical with the judgment, following resurrection, in Gehinnom at the Last Day.[1] Targum Deuteronomy[edit] In Targum Neofiti (Neof.) and the fragments (FTP and FTV) the "second death" is the death the wicked die.[2]

Ready to Work from Home? Try These 7 Hassle-Free Job Search Sites Whether you're looking to freelance, put more money toward bills, or enter into an entirely new career field, finding profitable work from home jobs can be a huge benefit. Online jobs provide freedom, flexibility, and income of course. However, on the surface, it may seem like it may seem confusing to find out how people are actually finding work from home jobs. Trust me, there's no secret club. You just have to do your research and know legitimate resources to start with.

The Best Free Courses for Working from Home — Live & Work by Faith Now, you may have to upgrade those skills at some point. Free will get you going and it may even give you enough to get you a good ways down the road. But when you start making some money, it’s a good idea to invest in the paid version. I want you to make me a promise: that in 2019, you will make some time to learn a new skill or improve an existing one. The courses I’m sharing with you today are free so no more excuses - ok? It only takes a click and the motivation to get ‘er done.