Dr Who The Talons of Weng-Chiang 1 Las garras de Weng Chiang sub español - Vìdeo Dailymotion. The Cloister Library. Disclaimer: The views expressed in these commentaries are the solely the opinions of the person who wrote the commentary. 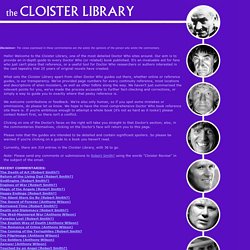 Hello! Welcome to the Cloister Library, one of the most detailed Doctor Who sites around. Our aim is to provide an in-depth guide to every Doctor Who (or related) book published. It's an invaluable aid for fans who just can't place that reference, or a useful tool for Doctor Who researchers or authors interested in the vast tapestry that 25 years of original novels have created. What sets the Cloister Library apart from other Doctor Who guides out there, whether online or reference guides, is our transparency. We welcome contributions or feedback. Eleventh Doctor - Doctor Who (Series 7 - Page 1) Doctor Who - The New Series - Ranges - Big Finish. Big Finish is proud to announce a new range of boxsets, featuring heroes and monsters from the New Series of Doctor Who. 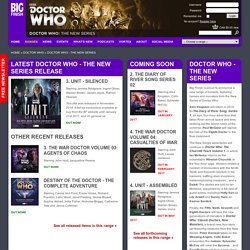 Alex Kingston will return in 2016 forThe Diary of River Song: Series 1, an epic four-hour adventure that takes River across space and time, seeking out the secret rulers of the universe. Paul McGann will reprise the role of the Eighth Doctor in the final instalment. The New Series adventures will continue in Doctor Who: The Churchill Years Volume 1, in which Ian McNeice returns as the indomitable Winston Churchill. In the four-hour saga, Winston relates a number of encounters with the Ninth, Tenth and Eleventh Doctors in his memoirs, battling alien incursions, metamorphosing creatures... and a Dalek! The stories are told by Ian McNeice, supported by a full cast of guest actors, including Holly Earl as Lily Arwell and Danny Horn as Kazran Sardick. New Series Adventures. The New Series Adventures are a series of novels relating to the long-running BBC science fiction television series, Doctor Who. 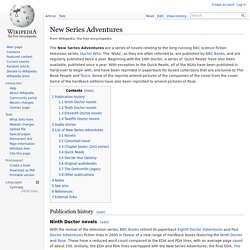 The 'NSAs', as they are often referred to, are published by BBC Books, and are regularly published twice a year. Beginning with the 10th Doctor, a series of 'Quick Reads' have also been available, published once a year. With exception to the Quick Reads, all of the NSAs have been published in hardcover to begin with, and have been reprinted in paperback for boxed collections that are exclusive to The Book People and Tesco.

Top 20 Heart-Breaking Moments Voted By You. Doctor Who The Idiots Lantern 2014 Show: Companion Swap. List of Doctor Who audio plays by Big Finish. This is a list of audio plays based on the long-running British science fiction television series Doctor Who produced by Big Finish Productions.[2] The first fifteen audio plays were released in both audio tape and CD format, and subsequent releases have been on CD only. 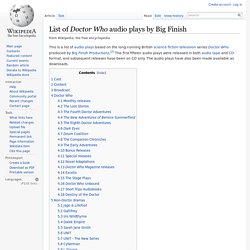 The audio plays have also been made available as downloads. Cast[edit] So far, productions have featured the Fifth (Peter Davison), Sixth (Colin Baker), Seventh (Sylvester McCoy) and Eighth Doctor (Paul McGann). Tom Baker began appearing as the Fourth Doctor in monthly releases that started in January 2012.[4] Big Finish has not licensed the rights from the BBC to produce audio dramas featuring the Doctors from the Ninth Doctor onwards. Mary Tamm (along with Ward, Jameson and Leeson) appeared in the Gallifrey dramas. Content[edit] 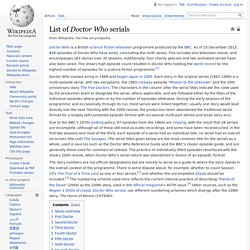 As of 25 December 2015[update], 826 episodes of Doctor Who have aired, concluding the ninth series. This includes one television movie, and encompasses 263 stories over 35 seasons. Additionally, four charity specials and two animated serials have also been aired. Series 5, Matt Smith, Karen Gillan, The Eleventh Hour. List of Doctor Who planets. This is a list of planets, fictional or otherwise, that are mentioned in the British science fiction television series Doctor Who and its spinoff literature, audio plays, television series and comics. 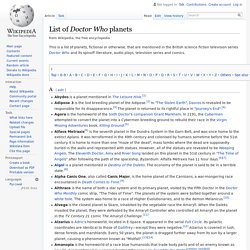 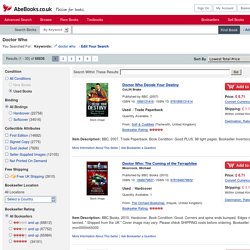 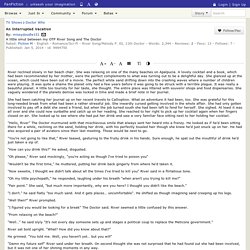 She was relaxing on one of the many beaches on Apalpucia. A lovely cocktail and a book, which had been recommended by her mother, were the perfect complements to what was turning out to be a delightful day. She glanced up at the ocean, which could have been out of a movie. Sylvester McCoy-Season 1 - A Video PlayList on Dailymotion. John Smith - Dailymotion. Doctor Who review: 'Heaven Sent' is a mind-bending masterpiece. ​"Let me be brave," whispered a doomed Clara Oswald last week. 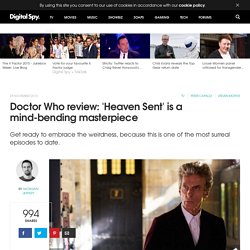 She could take a tip from BBC One - it requires balls to air one of Doctor Who's most experimental, risky and downright odd episodes to date on a Saturday evening in the wake of gushy glitter-fest Strictly Come Dancing. 'Heaven Sent' is an adventure so deliberately dark and obtuse that it's practically begging for a divided reaction. What's known in 'the industry' as a single-hander, it features no (major) speaking parts other than Peter Capaldi's Time Lord.

But writer Steven Moffat cleverly subverts the expectation that this'll be a low-budget escapade, with a surplus of Capaldi awkwardly expressing his inner thoughts aloud. Doctor Who - The Weeping Angels - Monster Files. Doctor Who. British science fiction TV series Premise History Licensed media such as novels and audio plays provided new stories, but as a television programme Doctor Who remained dormant until 2003. 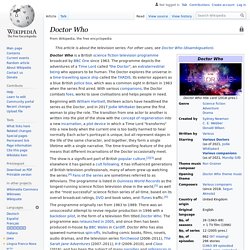 Doctor Who Online - BIGGER On The Inside... Doctor Who: The Time War - Illuminating the Dark Age. Everything we’ve learned about the Doctor’s darkest hour. By Oli SmithWith the Day of the Doctor fast approaching, Doctor Who's 50th Anniversary special appears to be gearing up to answer one of the show's biggest mysteries. Find Out How You Can See the 50th Anniversary Doctor Who Special in Theaters! After an absence of nearly 10 years, the Doctor returned to our screens in 2005 with a whole heap of newly acquired baggage and it wasn’t long before hints as to what had transpired during his absence began to trickle into the series.

Doctor Who. TV Programme guide. All videos from doctorwhoclasica.blogspot.com (theclassicdoctor) on Dailymotion. The Ultimate Doctor Who Site: The Glamour Chronicles - Covers & Details. 2015 Twelfth Doctor Novels. Plot synopses and cover art has been released for the next three New Series Adventures novels featuring the Twelfth Doctor. The stories are Big Bang Generation, Deep Time and Royal Blood written by Gary Russell, Trevor Baxendale and Una McCormack, respectively All three are currently due for release on 10 September 2015. An audio version of each will follow 5 November 2015. Big Bang Generation By Gary Russell. “I’m an archaeologist, but probably not the one you were expecting.”Christmas 2015, Sydney, New South Wales, Australia.Imagine everyone’s surprise when a time portal opens up in Sydney Cove.

Deep Time By Trevor Baxendale. ‘I do hope you’re all ready to be terrified!’ Royal Blood By Una McCormack. The Future of the Paternoster Gang. David Selby ponders where things could head next for the trio. Series Eight, it seems, will see changes to most of the show’s status quo: the Doctor has lost his title as the Last of the Time Lords and has taken on a newer, more capricious incarnation, changing his dynamic with the companion; the Siege of Trenzalore is over and the Silence would appear to be a thing of the past, and even smaller changes, such as a redly-lit, bookshelf-filled TARDIS console room only represent the greater shifts in the show as a whole. Yet moving onto a new era, the show-runner has decided to keep the Paternoster Gang: a broad label referring to the characters of Madame Vastra, the ‘Great Detective’ of Victorian London, her human wife, Jenny Flint and their unconventional butler, Sontaran Commander Strax.