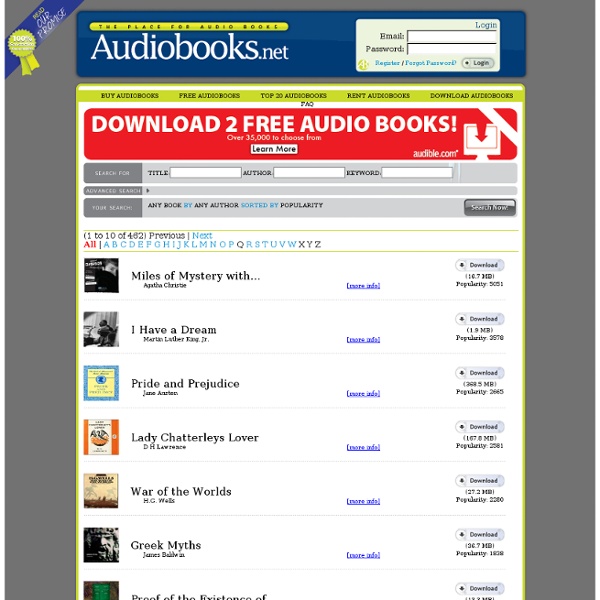 Welcome to Audiobooks.net Audiobooks.net is where you'll find one of the largest selections of audiobooks available. You can browse through more than 40,000 bestsellers, new releases and classic audiobooks in every genre and stream or download audiobooks directly to your iPhone, iPad, Android smartphone or computer. Browse Books Add some adventureto your daily commute Carpool with vampires,werewolves and witches Travel to another worldwithout leaving your front door Download or Stream Bestselling Audiobooks - Get Your First Book Free! Audiobooks.net has all of the top selling audiobooks in Fiction, Romance, Nonfiction, Children's audiobooks and more. Our library has a large collection of genre categories and subcategories to help you find and download or stream audiobooks quickly and easily. Related:  reading / audiobooks / pdfs

The First Violin by Jessie Fothergill - Books Should Be Free By: Jessie Fothergill (1851-1891) May Wedderburn is a quiet provincial girl, living in small and seemingly boring Skernford. Underneath the dull exterior, there is mystery, suspicion and fear in this little town, surrounding the austere local wealthy landowner who is very interested in marrying poor May. It looks as though she will have to marry him whether she likes it or not until an unsuspected alliance is formed between her and a respected old lady. They both escape to Germany where music and excitement await them. First Page: Author of "A March in the Ranks," Etc. "Wonderful weather for April!" Free Classic AudioBooks. Digital narration for the 21st Century Chopin: The Man and His Music by James Huneker - Books Should Be Free By: James Huneker (1860-1921) A biography of the Polish composer and virtuoso pianist Frédéric Chopin and a critical analysis of his work by American music writer and critic James Huneker. (Summary by Julie VW) First Page: by James Huneker Gustave Flaubert, pessimist and master of cadenced lyric prose, urged young writers to lead ascetic lives that in their art they might be violent.

Free Audio Books Sort by Titles Per Page 1 - 10 of 10120 Titles by Abraham Maslow Available on:Audio Download A Theory of Human Motivation is the cornerstone of psychiatrist Abraham Maslow's concept of the human hierarchy of needs. by Martin Luther King, Jr. Available on:Online Audio | Online Video "I have a dream that one day this nation will rise up and live out the true meaning of its creed: "We hold these truths to be self-evident, that all men are created equal." by C.S. The entire Chronicles of Narnia read by Chrissi Hart for her Readings from Under the Grapevine podcast. by Earl Nightingale Available on:Audio Download | Online Audio | Online Video Earl Nightingale's classic, The Strangest Secret, earned the first Gold Record for the spoken word, with sales exceeding 1 million copies. French Phase 1, Unit 1 contains 30 minutes of spoken language practice, with an introductory conversation, and isolated vocabulary and structures. by Washington Irving by Robin Sharma by William Shakespeare by Brian Johnson

20 Websites To Download Free Audio Books Simply put, audiobooks are recordings of books which are read aloud. But some may think: why would we need audio books if we can read books ourselves? Audio books are useful not only for the visually impaired, but also for busy people who love a good read, but just don’t have the time to sit down to bury their faces in their favorite classics. So the best alternative would be to listen to audiobooks via audio devices while travelling or commuting to work. Besides, audio books are great for learning a new language to ensure you don’t pronounce a foreign phrase wrongly because you can listen to exactly how it is spoken. Here’s our list of 20 best websites to download free audio books. Recommended Reading: 20 Best Websites To Download Free EBooks Librophile Librophile provides completely legal free audiobooks for both mobile and PC. Lit2Go Lit2Go has a big and free online collection of poems and stories in MP3 format. Project Gutenberg LearnOutLoud Free Audio Books Should Be Free LibriVox ejunto

Mental Efficiency and Other Hints to Men and Women by Arnold Bennett - Books Should Be Free By: Arnold Bennett (1867-1931) Mental Efficiency and Other Hints to Men and Women is one of the many self help books that Bennett wrote, the most famous of these being How to Live 24 Hours a Day. It is highly readable, amusing and offers wisdom in an extremely palatable form. Bennett's gift for analysis and his knowledge of philosophy and psychology make this book a valuable treasure trove of handy hints to improve our lives. Though it was first published in 1911, it remains as relevant, wise and useful as it did more than a hundred years ago. Originally intended for American audiences, the book opens with a discussion on the nature of mental efficiency as opposed to physical efficiency that was, and still is, worshiped in America and many other countries today. Bennett defines mental efficiency as the ability to read, write and think. Mental Efficiency and Other Hints to Men and Women is indeed a timeless classic that can benefit readers of all ages.