Ten Common Fallacies Everyone Should Know 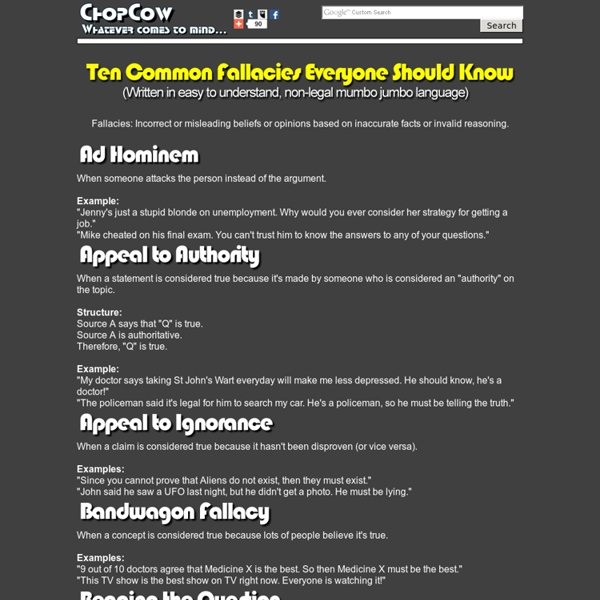 When a statement is considered true because it's made by someone who is considered an "authority" on the topic. Structure: Source A says that "Q" is true. Source A is authoritative. Therefore, "Q" is true. Example: "My doctor says taking St John's Wart everyday will make me less depressed. He should know, he's a doctor!"

Showcase of Parallax Scrolling Effects in Web Design The parallax illusion is one of the coolest effects to hit the world of web design. This showcase rounds up the best examples of websites that have a scrolling parallax effect. Some use the effect to add a subtle treat to the website’s background, whereas others use the parallax effect more prominently to create an exciting browsing experience. The parallax effect has been around for years in classic video games, but came into trend in the web design community when it was implemented into the background of the Silverback app website. The simple type of parallax effect seen on the Silverback site was used to spice the design with a hidden treat, only visible when the user’s browser is resized. The effect has since evolved and is now commonly seen as part of the scrolling feature of a web page, where multiple backgrounds seem to move at different speeds.

The Skeptics&#039; Guide To The Universe - Logical Fallacies Structure of a Logical Argument Whether we are consciously aware of it or not, our arguments all follow a certain basic structure. They begin with one or more premises, which are facts that the argument takes for granted as the starting point. Then a principle of logic is applied in order to come to a conclusion. This structure is often illustrated symbolically with the following example: Premise1: If A = B, Premise2: and B = C Logical connection: Then (apply principle of equivalence) Conclusion: A = C In order for an argument to be considered valid the logical form of the argument must work – must be valid.

Psychological Tests and Quizzes By John M. Grohol, Psy.D. All of our psychological quizzes below are free, and most are based upon scientific research. They are instantly and automatically scored once completed, giving you immediate results. You do not have to create or have a Psych Central account in order to take one of our quizzes. But you'll need one if you'd like to save your test results, or to help track your progress over time. DIY Braided Hex Nut Bracelet We’re nuts for nuts. Is there a more versatile and inexpensive DIY component than a hex nut from the hardware store? You can imagine our excitement when we first discovered Philip Crangi’s Giles & Brother Hex Collection. Honestly, nuts braided into jewelry is WTF genius! With a few items that we always seem to have lying around, we tackled the technique and made our own spine-like braided hex nut wrap bracelet.

This guy’s 258 square foot apartment is better than my house. « blah blah blah… I am fascinated with the small house movement. There is just something about well-designed small living spaces that makes me want one! I could never imagine a way to make 258 square feet into anything but a fantastic closet, but designer Barbara Appolooni found a way to make it into a luxurious apartment equipped with a bathroom, kitchen, closet, bed, and balcony. When Christian Schallert isn’t cooking, dressing, sleeping or eating, his 258 square feet apartment looks like an empty cube. To use a piece of furniture, he has to build it.Located in Barcelona’s hip Born district, the tiny apartment is a remodeled pigeon loft. Christian says its design was inspired by the space-saving furniture aboard boats, as well as the clean lines of a small Japanese home.

Pharyngula Probably not. But the New York Times reports: A review of studies has found that the health benefits of infant male circumcision vastly outweigh the risks involved in the procedure. Actually, it doesn’t. JCS, Journal of Consciousness Studies Critical Reviews The complete text from which these are extracted is available. See also Editorial: The Future of Consciousness Studies Over the last few years, research into consciousness has at last become accepted within the academic community.

Handy Meter – Digital Meter for Liquids by Jeon Hwan Soo Another Perfect Measure One of the secrets to great cooking is to measure out the ingredients as accurately as possible. While dry ingredients are not so much of a pain, it’s the liquids that make me quiver. Handy Meter is a digital measure that goes around the faucet mouth or spouts of bottles and jugs, to pour out the right amount of liquid. It does away with the need for a measuring jar, hence increasing the accuracy. Scott Haefner‘s Kite Aerial Photography Testing to make sure the shutter is being triggered by the radio control before letting go. You can see the camera hanging from the kite line in the shadow. Recent Photos Background I’ve been interested in photography for as long as I can remember, and kite aerial photography (KAP) seemed like a natural progression. At least it did after a friend convinced me that it isn’t completely ridiculous to suspend an $800+ camera from a kite.

NeuroLogica Blog Jan 13 2017 Cognitive Biases in Health Care Decision Making This was an unexpected pleasant find in an unusual place. The Gerontological Society of America recently put out a free publication designed to educate patients about cognitive biases and heuristics and how they can adversely affect decision making about health care. The publication is aimed at older health care consumers, but the information it contains is applicable to all people and situations. The wonders of your brain - A special report Parkinson's Disease: A personal story Local videographer Mark Lyon, 53, first lost his sense of smell, then over the course of ten years, other symptoms crept along, limiting his usually aggressive approach to water sport competition. It started with tremors, then a loss of balance, "almost a metabolic feeling of bonking, like a marathoner at mile 20," he described it. "In a year, I went from competing in paddleboard races to fighting for balance and limping along at half speed. And still I persisted in denial, until my great friend and training partner Ron gave me the push I needed to see my doctor. " The doctor sent him for a consult a neurologist, Irene Litvan in the movement disorders program at UCSD.

CardSharp, A Folding Knife for Grammar-Nazis I’m predisposed to love the CardSharp, just because of its name. I’m no big stickler for the use of “correct” English, but when the meanings of words drift we often lose very useful expressions. “Infer” is often used to mean “imply”, for example, and “random” is currently mangled to mean “unexpected”. And “card shark” is, of course, an ignorant deviation from “card sharp”. The CardSharp is a knife that is created by unfolding a credit card-sized kit. The blade flips out, and the rest of the card folds over to make the handle.

Story Behind Those Stunning Cinematic Gifs Here at theMET, we're always looking for creative projects that catch our eye. More than anything, we love posting about work that pushes boundaries, showing our audience something that has been changed, flipped or spinned into something magically different. Then, we see it as our job to find out the story behind such projects. A List Of Fallacious Arguments attacking the person instead of attacking his argument. For example, "Von Daniken's books about ancient astronauts are worthless because he is a convicted forger and embezzler." (Which is true, but that's not why they're worthless.) Another example is this syllogism, which alludes to Alan Turing's homosexuality: Turing thinks machines think. Turing lies with men.