VoS: Voice of the Shuttle 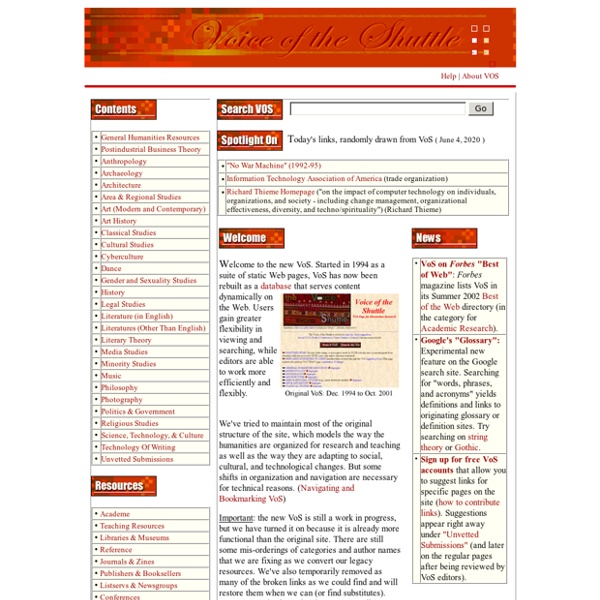 Today's links, randomly drawn from VoS ( Apr. 18, 2014 ) Currently, the site is best viewed in Internet Explorer 5+ and Netscape 6+. We are still working on full compatability with Netscape 4.x. Other interface and usability improvements will be introduced in the future. In a later implementation phase of the new VoS, users who have signed up for accounts will have additional editorial privileges allowing them to maintain/revise links that they have contributed. There will also be group accounts that enable classes, organizations, conferences, etc. to build subsets of VoS resources that will appear both on the regular VoS pages and on a special page set aside for the group (e.g., the "English 130," "History 186," or "Conference 2001" VoS Resources Page).

Diotima: Women & Gender in the Ancient World Call for Collaborators to The On-line Companion to The Worlds of Roman Women The On-Line Companion to the Focus Reader, The Worlds of Roman Women, expands the book's wide representation of Latin texts by and about women dating from the earliest periods through the fourth century CE. The medium of a website, moreover, offers the opportunity to integrate visuals to texts, thus enabling users to make connections between language and material culture. The Companion has two major parts. The Worlds section includes Class, Religion, Childhood, Learning, Marriage, Family, Body, State, Work, and Flirtation. Each World opens to reveal a thematic image of women in this world, a brief essay on this World, a list of on-line texts and hyperlinked images.

The Invisible Web: A Beginners Guide to the Web You Don't See By Wendy Boswell Updated June 02, 2016. What is the Invisible Web? The term "invisible web" mainly refers to the vast repository of information that search engines and directories don't have direct access to, like databases. Literary Resources on the Net (Lynch) Literary Resources on the Net These pages are maintained by Jack Lynch of Rutgers — Newark. Comments and corrections are welcome. Nestor&#039;s Cup: National Archaeological Museum The National Archaeological Museum in Athens was a delightful way to spend the morning in Athens while we waited for our hotel room to be prepared. We toured the entire thing slowly, and were able to reflect on the landscape and the locations for many of the exhibits. By an interesting stroke of luck, there was a special exhibit devoted to Thera, which we had visited just days before. Here are just a few select images from the museum.

Direct Democracy, 2.0 Angelika Warmuth/DPA, via Agence France-Presse — Getty Images Members of the Pirate Party attended a conference in Neumünster, Germany, last month. I FIRST took real notice of the Pirates last summer during the campaign for city elections in Berlin. German electioneering is quaint, even faintly musty by American standards. Political advertising mostly takes the form of full-color head shots of the candidates hung on light posts and telephone poles with interchangeable slogans about working for a brighter future. “Why am I hanging here anyway?” Partners The Museum of Online Museums (MoOM) Exceptional exhibits are highlighted each quarter. Selections from previous seasons are archived here. Please consider joining our MoOM Board of Directors won't you?

Writing Forms of Poetry Worksheets Descriptive Writing Guide - Guided Practice - Awesome Checklists View Now... Writing Starters: Volume 1 12 Inspiring Urban Image Galleries 12 Inspiring Urban Image Galleries | 500+ Pictures Jump in and take incredible visual tour of the best of WebUrbanist, from alternative forms of graffiti to amazing green designs and awe-inspiring abandoned places from around the world. Collection 1: Alternative Street Art and Graffiti 20 Light Graffiti Artists and Photographers: Light graffiti is a unique art that takes many forms, from comic and creative to refined and deliberate. These light graffiti artists span the spectrum and use a wide range of tools to create art that can only be captured in the right time and place via photography, itself a difficult art. What did people do in a Medieval City? What did people do in the Middle Ages? If you meet a random person on the street, what is his likely occupation? Or did people work at all?

Zeitgeist and the Venus Project The Zeitgeist Movement has already attracted a large following, claimed to be over a half a million people so far — worldwide. Numerous Facebook groups — one with more than 70,000 people, another with more than 35,000, and still one more with almost 20,000 — transmit instructions and ideas to the activists around the globe. Various local and national groups have memberships in the thousands, using social-networking services to coordinate their campaigns and events.

100 More Incredible Lectures From the World's Top Scientists Posted on Tuesday July 31, 2012 by Staff Writers Open source, for both the classroom and the self-educator, proves an absolutely swoon-worthy digital ocean of information. Unsurprisingly, the sciences thrive in such a climate, with the Internet positively flooded with panels, lectures, Q&As, talks, complete and incomplete classes, demonstrations, and other conduits through which education flows. Our 2009 listing featured some of the best around, but it didn’t even scratch the surface of available content. Statement of beliefs of the Ontario Consultants on Religious Tolerance (OCRT) About this website Sponsored link. The importance of faith/belief statements: Free Online Comic Books Two of the greatest obstacles that comics have in reaching readers are exposure and cost. Fortunately, the internet has provided remedies for both. Many comic book creators and publishers have put their comics online, available as full issues and at absolutely no cost to the reader.