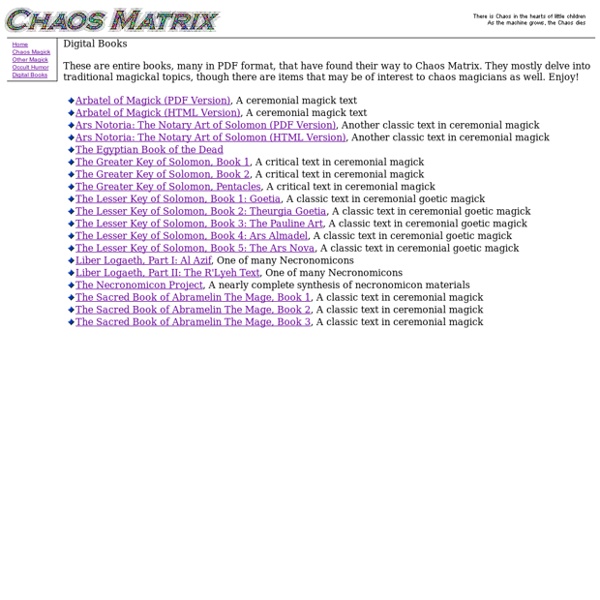 OTO & A∴A∴ Libri By Number O.T.O. and A∴A∴ Libri by Number This collection is intended to consist of high-quality HTML documents that have been carefully proofread. By the time a liber is linked from this page, it should be complete and have no typographical errors. This necessarily means that the collection is starting out small and will grow slowly, but what is here may be relied upon for accuracy. The publications of the A∴A∴ divide themselves into five classes. Want More Information ALCHEMY STUDY PROGRAM - The oldest continuing education program on alchemy. Both spiritual and practical paths of alchemy are covered. Certificates issues for each of the seven modules, and students who complete all seven modules receive the Diploma in Alchemy. More Information . . .

The Hall of Mysticism The material world will never become a better place until we join forces to improve it. And before we can improve the world, we must strive to improve ourselves. For me, the quest for self-improvement and spiritual satisfaction has led down numerous paths. Online Scans of Rare & Antique Metaphysical Books pages 1-13 'The Path' and pages 14-19 'Meaning of the Symbol' Voice of Isis - by the Order of Christian Mystics - 1926 Voice of ISIS: CHAPTER XXXIV. The Meaning of the Symbol The Seal consists of a double triangle inscribed in a circle, with an open Eye in the center and three five pointed stars in the spaces between the sides of the triangle and the circle. The circle represents Boundless Space and limitless Time in Eternity. It marks off the space in which creation takes place, or the circle formed by the downpouring of the Great Creative Force, in this case the circumference within which this Order is working.

Ralph Waldo Emerson Ralph Waldo Emerson (1803-1882), American Transcendentalist poet, philosopher, lecturer, and essayist wrote Nature (1836); To go into solitude, a man needs to retire as much from his chamber as from society. I am not solitary whilst I read and write, though nobody is with me. But if a man would be alone, let him look at the stars. The rays that come from those heavenly worlds, will separate between him and what he touches. One might think the atmosphere was made transparent with this design, to give man, in the heavenly bodies, the perpetual presence of the sublime.

Living an Alchemical Life » Ouroboros The last post about the Ouroboros (October 22, 2010) ended with Plato’s description of this universal symbol that is the foundation of the work of alchemy. The concept of two separate and distinct spaces described by Plato lies at the heart of alchemy which is the fusion of opposites. Returning for a moment to the Chrysopoeia Ouroboros, we cannot avoid the obvious distinction between the solid black head and neck of the snake contrasted with the white tail with black dots. Free Books on Yoga, Religion & Philosophy Some of the HTML files have both Devanagari (Windows, Mac and Unix X11R6) and Romanized Sanskrit fonts (Windows only). Instructions to install the fonts can be found at Avinash Chopde's ITRANS site. Press the "Shift" key and click on a link below to download the fonts for your system: If you do not install these fonts, you will see some other characters in place of the Sanskrit fonts but the English texts are not affected.

Grimoires Warning : the following documents deal with magic and should not be used without proper care and deep knowledge of this art. The word grimoire is from the Old French grammaire, or grammar. Latin "grammars" (books on Latin syntax and diction) were considered in the Middle Ages as books of basic instruction. Today, a grimoire is considered as a book of magical knowledge, with instructions for its use to achieve certain ends. Necropants - Macabre Icelandic occult tradition By Charlie Hintz on January 15, 2013 The Strandagaldur Museum of Icelandic Sorcery & Witchcraft in Holmavik tells the story of seventeen people burned at the stake in the 17th century for occult practices. The museum’s claim to fame is an exhibit showcasing the macabre legend of Necropants, or nábrók. According to legend, necropants could produce an endless flow of coins if done correctly. To begin with, one would need to get permission from a living man to use his skin upon his death.