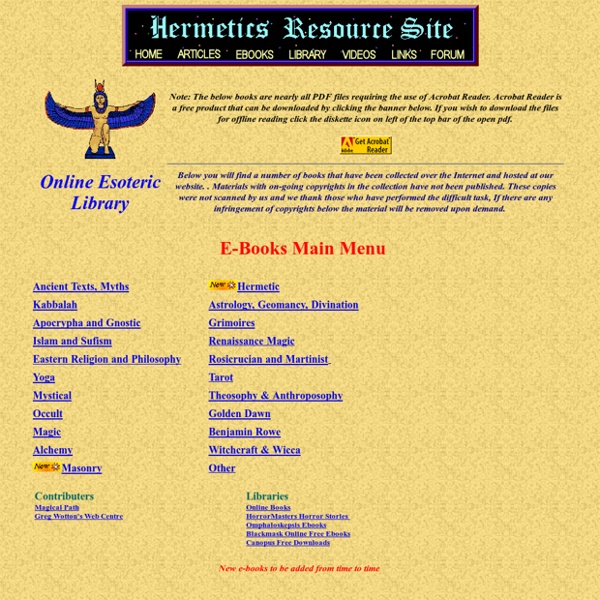 Rare Metaphysical Books - The VOICE OF ISIS pages 1-13 'The Path' and pages 14-19 'Meaning of the Symbol' Voice of Isis - by the Order of Christian Mystics - 1926 Voice of ISIS: CHAPTER XXXIV. The Meaning of the Symbol The Zodiac-Bible In The Stars Not many folks have heard about the Bible in the stars. This is definitely NOT astrology. Astrology can't even put three signs together to make a story, whereas, the 48 constellations that make up the true Zodiac all go together to tell the story of Jesus, the Redeemer.

Masonic E-Book Library Note: Many of the e-books in this library are several hundred pages long and include illustrations. It takes a minimum of a high-speed DSL or cable modem to download many of them. i.e. Mackey's Masonry Defined takes 3 minutes just to download the text. Secrets of The Occult: The Magicians Secrets of the Occult explores the world of the occult from the ancient and modern magicians who practice it to the cutting edge scientists attempting to explain its mysterious claims. This program highlights the advances that have been achieved by innovators who challenged established reality like Newton, Galileo, Carl Jung and Einstein. The claims of the occult magicians are put under the microscope to reveal the fascinating interface between ancient Egyptian and Greek beliefs to modern discoveries of the mind and the physical world. The Magicians & The Scientists Secrets of the Occult DVD Extras explores the fascinating interface between occult beliefs and modern discoveries of the mind and the physical world. Experts speak on a range of topics from the function of magic to the beginning of mysticism.

Astrology & the Chakras In this article I would like to explore the exciting possibility of bridging two of history's greatest psychological systems -- astrology and the chakras. Conventionally, these two systems have been seen as having little or nothing to do with each other, the former primarily concerning the outer world, or macrocosm, and the latter involving the inner world, or microcosm. In fact, as we shall soon see, these two systems are but two sides of the same coin, each one complementing the other and thus enhancing our understanding of both.

Pyramid Texts Online - Library Come in and make yourself comfortable. Select a book from the list below to load into the reading window. If you need help call Bennu by clicking on the cartouche of Unas at the top of the page. Use the arrows on the bottom right of the screen to turn the pages. The Wicca Calendar When practicing wicca, it’s important to know the wicca calendar in order to practice the correct rituals during the correct time of the year. These wicca holidays are normal pagan holidays in which rituals are done. This wicca calendar explains what and when the different holidays are. Use this wicca calendar in order to know when to worship and perform rituals. You may also wish to find specific rituals for specific holidays. The Great Festivals Or Sabbats:

Using Yoga To Breathe “If there is anything Divine in you, it is your breath.” – Yogi Bhajan I have loved, truly and deeply, yoga since 1998 when I saw Madonna talk about it with Oprah. Still, it seems, the mind/body/spirit promise of yoga and I had never actually met until early this year when I first stepped into Kundalini Rising Yoga in Nashville, Tennessee. I was finally able to understand the relationship between myself, the terribly human me and the Divine that is both within and far beyond me. It was an admittedly clumsy beginning, complete with several failed attempts to integrate this practice into my every day life. You Get Told Exactly What You Need to Hear: A Visionary Summons from the Deep... She told you exactly what you needed to hear, that's all. Neo, sooner or later you're going to realize, just as I did, there's a difference between knowing the path and walking it. —Morpheus in The Matrix I first encountered the Ashaninkan shaman Juan Flores within the Cinema de Indio, one of the magical practices of the rainforest facilitated by the psychoactive brew ayahuasca. Even many years after that heady initial immersion in the vegetalista tradition of the Peruvian Amazon, I still contemplate Flores invitation to join him in the rainforest with wonder, and ambivalence.

Free eBooks from Viewzone Viewzone recently acquired much larger bandwidth, thanks to donations from our readers. We have used this to offer many new features including this new FREE eBook section. If you have an eBook you would like to share, please contact us. THE SILENT BURNING a book by Ryan Bartek This is the debut anthology of USA writer, journalist & musician Ryan Bartek. At first glance 'THE SILENT BURNING' appears to be a scattered anthology, but at core, it's an all-American anti-speech for the ages.