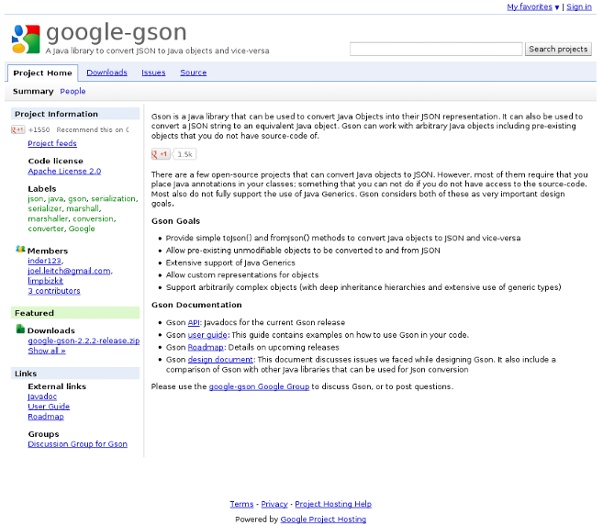 Gson is a Java library that can be used to convert Java Objects into their JSON representation. It can also be used to convert a JSON string to an equivalent Java object. Gson can work with arbitrary Java objects including pre-existing objects that you do not have source-code of. There are a few open-source projects that can convert Java objects to JSON. However, most of them require that you place Java annotations in your classes; something that you can not do if you do not have access to the source-code. Gson Goals Provide simple toJson() and fromJson() methods to convert Java objects to JSON and vice-versa Allow pre-existing unmodifiable objects to be converted to and from JSON Extensive support of Java Generics Allow custom representations for objects Support arbitrarily complex objects (with deep inheritance hierarchies and extensive use of generic types) Gson Documentation Please use the google-gson Google Group to discuss Gson, or to post questions. Gson Tutorial by StudyTrails

Apache Velocity Site - The Apache Velocity Project Android Scripts « udinic As a busylazy developer, I always try to automate repeating routines. Those sequence of actions are getting annoying after a few times and always make me gasp. That’s why some of my time is dedicated to writing small scripts to make my life easier, and the development process faster and anger-free. ADB Batch Scripts ADB – Android Debug Bridge, is a very powerful tool. Most of my repeated ADB commands are for DB access. First, I request to start ADB with root access, not applicable on stock ROMs (as least not easily), and pulling out the DB file to a temp location. If we want to modify the DB on the device, I wrote a small script to receive any SQL statement, and run it directly on a DB inside the device: Very simple. Another common thing I do, is executing specific services and activities, great help for my debugging life. I can pass extras, action and even activity attributes as clear-top, no-animation and more. Python Scripts 1. Here’s an example output: That’s all for now. Like this:

HttpClient - HttpClient Home End of life The Commons HttpClient project is now end of life, and is no longer being developed. It has been replaced by the Apache HttpComponents project in its HttpClient and HttpCore modules, which offer better performance and more flexibility. Introduction The Hyper-Text Transfer Protocol (HTTP) is perhaps the most significant protocol used on the Internet today. Although the java.net package provides basic functionality for accessing resources via HTTP, it doesn't provide the full flexibility or functionality needed by many applications. Designed for extension while providing robust support for the base HTTP protocol, the HttpClient component may be of interest to anyone building HTTP-aware client applications such as web browsers, web service clients, or systems that leverage or extend the HTTP protocol for distributed communication. There are many projects that use HttpClient to provide the core HTTP functionality. History