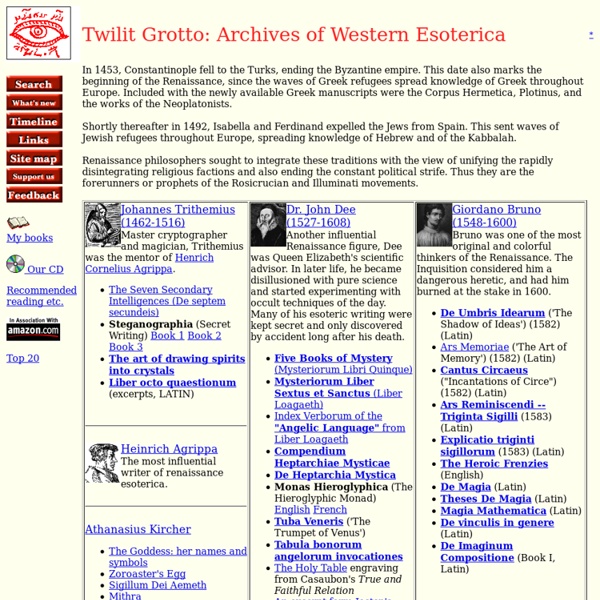 OTO & A∴A∴ Libri By Number O.T.O. and A∴A∴ Libri by Number This collection is intended to consist of high-quality HTML documents that have been carefully proofread. By the time a liber is linked from this page, it should be complete and have no typographical errors. The publications of the A∴A∴ divide themselves into five classes. Class “A” consists of books of which may be changed not so much as the style of a letter: that is, they represent the utterance of an Adept entirely beyond the criticism of even the Visible Head of the Organization. Class “B” consists of books or essays which are the result of ordinary scholarship, enlightened and earnest. Class “C” consists of matter which is to be regarded rather as suggestive than anything else. Class “D” consists of the Official Rituals and Instructions. Class “E” consists of public announcements and broadsheets. Some publications are composite, and pertain to more than one class. O.T.O. documents are not assigned to any A∴A∴ class.

Herbalism, Medieval, Magickal and Modern Disclaimer: please read Aunt Bunny's Herbal Safety Rant; this is NOT a medical advice site! (Primarily directed at Society for Creative Anachronism members- by Jadwiga Zajaczkowa/Jenne Heise) Class Handouts Making Herbal Preparations An outline of instructions for creating various basic herbal preparations Scents of the Middle Ages A handout for a class on various uses of scented materials in the Middle Ages Making Medieval-style Scented Oils and Waters A handout and background for a hands-on class. Hair Care Recipes Some pre-17th c. recipes for hair care products and treatments. Herbal Sallets and Green Pottages A handout for a class on raw and cooked greens as food, pre 1650. Making Medieval Mustards Class notes: medieval mustard recipes, instructions on making your own mustard from scratch. Making Mustard the Medieval Way-- A Youth class Instructions and handout for a class directed at pages and children's program Spices from the East Class handout for a class on spices, last updated 2/11/01 Recipes

Esoteric Online alchemhandbook CHAPTER V p.47 How are herbs related to the stars? Can such a thing be true? Scientists will shake their heads in disgust. "Nonsense. In plant and mineral life, organic and inorganic minerals exist as separate groups. Perhaps science someday will take the time to investigate in these uncharted areas and experiment on a far broader base than has been the case so far. The following is a condensed tabulation of herbs listed according to the planetary influence which affects each of them, as claimed by ancient tradition. In concluding this condensed table of herbs and corresponding Planetary influences, it will be interesting to add a few further observations. Is there anyone capable of answering why the chickweed flowers are open and upright from nine in the morning until noon? There is no point in going any further into this matter here as sufficient material can be found in the following pages to help in the assimilation of the spiritual essence for further transmutation. CHAPTER VI p.57

Internet Sacred Text Archive Home Ancient Egypt: Medicine If one had to be ill in ancient times, the best place to do so would probably have been Egypt. Not that an Egyptian's chances of survival would have been significantly better than those of his foreign contemporaries, but at least he he had the satisfaction of being treated by physicians whose art was renowned all over the ancient world. Unlike the injuries caused by accidents or fighting, which were dealt with by the zwn.w (sunu),[37] or scorpion stings and snake bites for which the xrp srqt (kherep serqet) [37], the exorcist of Serqet, knew the appropriate spells and remedies, illnesses and their causes were mysterious. I bow down to your (i.e. Preventive measures included prayers and various kinds of magic, above all the wearing of amulets. The healers and their art The Egyptian priest-physician, wab sxmt (wab sekhmet) [37], had a number of important functions. This god arrived in Bekhten in a full year and five months. Magic is effective together with medicine. The medical knowledge