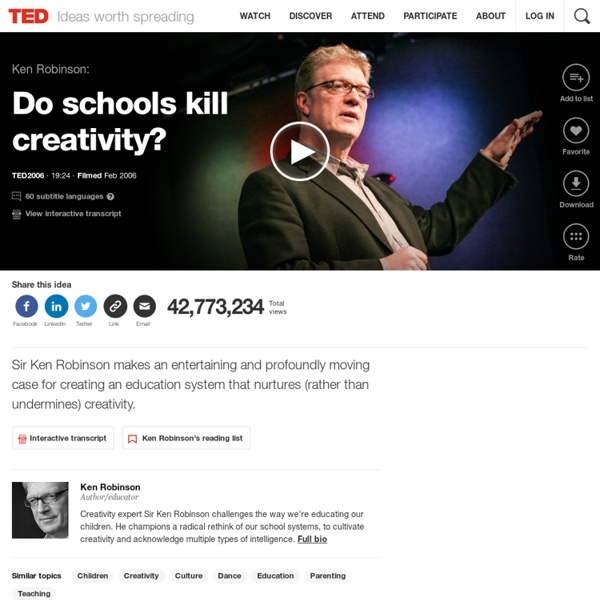 Ideas by Peter Watson - Asiaing.com: Free eBooks, Free Magazines, Free Magazine Subscriptions Ideas: A History of Thought and Invention, from Fire to Freud, By Peter Watson. HarperCollins, 2005. "This is a grand book...The history of ideas deserves treatment on this scale." —Evening Standard (London) In this hugely ambitious and stimulating book, Peter Watson describes the history of ideas, from deep antiquity to the present day, leading to a new way of understanding our world and ourselves. The narrative begins nearly two million years ago with the invention of hand-axes and explores how some of our most cherished notions might have originated before humans had language.

Learning to be homeless Yesterday I got on the Central Line tube at Oxford Circus, one of the busiest parts of London, just minutes after a downpour started. The carriage was sticky and warm, and quiet. I sat on a mostly empty row of seats. As the tube doors closed two figures dashed through the narrowing gap. The first man looked old. Not because of his skin, although it was wrinkled, and not because of his frame, though it was stooped. CNN Student News - February 17, 2016 Politics swirl around the notion of filling a late justice's seat on the U.S. Supreme Court. Oil-producing nations grapple with the prospect of changing their production plans. Lasers increasingly threaten airline pilots. And an astronaut discusses the challenges of spending almost a year in space.

How to dream up a New Yorker cartoon caption Guest blogger Deirdre Barrett is a psychologist who researches dreams and sleep — and explores how dreams can be used to unlock waking-world problems. In this post, she looks at the New Yorker Cartoon Caption Contest, which recently featured a cartoon involving what might be a TED speaker’s worst nightmare … It started when, over on New Yorker cartoon editor Bob Mankoff’s blog, she threw out a challenge: Can you (literally) dream up a great caption? We asked for more: The New Yorker Cartoon Caption Contest targeted TED recently. In early May, the image (supplied by cartoonist Harry Bliss) to be captioned was this: ©Harry Bliss/New Yorker Collection 2012

Grand designs: 10 steps to transform your classroom The start of a new academic year is the perfect time to redesign your classroom. But before you get carried away – tearing down wall displays and spending a fortune at Ikea – it’s worth taking a little time to consider what you want to achieve. Begin by asking yourself some key questions: what do you want to display on the walls? Thanksgiving-anglais From which city did the Mayflower depart? The Pilgrim Monument in Provincetown commemorates the Pilgrims' first landing in New England. How many days did it take for the Mayflower to reach the New World? How many people were there on board that ship?

18 Things Highly Creative People Do Differently This list has been expanded into the new book, “Wired to Create: Unravelling the Mysteries of the Creative Mind,” by Carolyn Gregoire and Scott Barry Kaufman. Creativity works in mysterious and often paradoxical ways. Creative thinking is a stable, defining characteristic in some personalities, but it may also change based on situation and context. Inspiration and ideas often arise seemingly out of nowhere and then fail to show up when we most need them, and creative thinking requires complex cognition yet is completely distinct from the thinking process. Let teachers experiment without fear of failure, says sector leader FE teachers should be encouraged to experiment and innovate in the classroom without fear of failure, according to the chief executive of the Education and Training Foundation. Speaking at the organisation's practitioner research conference in London earlier this week, David Russell said the foundation’s aspiration was “that evidence-based practice and innovation will be recognised as fundamental to the professional identity of those who work in the education and training sector”. He added: "This means encouraging and supporting experimentation and investigation, and assisting practitioners to do this is a systematic way, and recognising that sometimes it will go wrong, not produce the expected results, etc." The foundation’s support programme, he added, aimed to help those in the sector to link theory and practice “so that they can draw on existing research and educational theory in their research”.