Mental Disorders & Conditions - DSM. Childhood disorders, often labeled as developmental disorders or learning disorders, most often occur and are diagnosed when the child is of school-age. 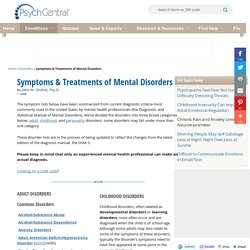 Although some adults may also relate to some of the symptoms of these disorders, typically the disorder’s symptoms need to have first appeared at some point in the person’s childhood. These disorders typically aren’t diagnosed until an individual is a young adult, often not until their 20’s or even 30’s. Most individuals with personality disorders lead pretty normal lives and often only seek psychotherapeutic treatment during times of increased stress or social demands. Nature vs nurture 2014. Gender Differences:The Nature Versus Nurture Debate. Dr. Money And The Boy With No Penis. Nature v Nurture. Nature v. Nurture Debates Documentary NHD 2011. Nvn 2014. Nature Nurture and crime. 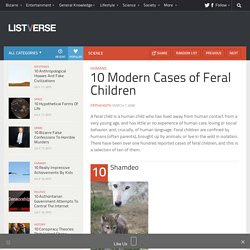 Feral children are confined by humans (often parents), brought up by animals, or live in the wild in isolation. There have been over one hundred reported cases of feral children, and this is a selection of ten of them. In May 1972, a boy aged about four was discovered in the forest of Musafirkhana, about 20 miles from Sultanpur. The boy was playing with wolf cubs.