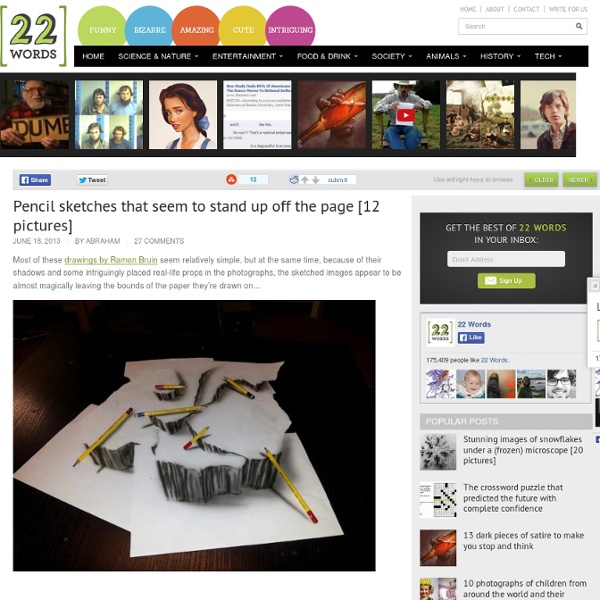 Most of these drawings by Ramon Bruin seem relatively simple, but at the same time, because of their shadows and some intriguingly placed real-life props in the photographs, the sketched images appear to be almost magically leaving the bounds of the paper they’re drawn on… (via My Modern Met)

Sculpture sur Papier - Calvin Nicholls It was only a matter of time before Calvin Nicholls' life-long passion in art and wildlife combined! The Canadian has been a full-time paper sculpture artist since the mid-1980's. With such a variety of animals in his collection, he's essentially created his own paper zoo. Performance Sand Art - Kseniya Simonova Born in a small town on the Crimean peninsula in Ukraine, Kseniya Simonova has skyrocketed to international stardom following her 2009 win of Ukraine’s Got Talent. Her combination of story telling, sand art, and music has been showcased in over 200 performances over the past 4 years, including locales such as Ukraine, Russia, Norway, Japan, Poland, Austria, China, The United Kingdom, India, Italy, Germany, Kazakhstan, Malta, and others. She performs regularly for presidents, heads of state, and royalty. Since she was a child, Kseniya painted, drew and designed alongside her mother and family. Kseniya would later become a fashion model, though she graduated from higher studies with a degree in medico-psychology. Her devotion to live sand art began when her now-husband Igor discovered her as a model.

Paper Art - Elsa Mora Artwork and Photography © Elsa Mora ↓ Links to other galleries: *Artist’s Books *Mixed Media *Painting *Editorial *Drawing *Jewelry *Photography Lieux de tous les jours sous dessins ajourés - Shamekh Bluwi Shamekh Bluwi, an Ammam, Jordan-based illustrator and architect, is creating a striking series of photographs that feature paper cutouts of women whose dresses can become literally anything… Shamekh’s sketches are completed with the patterns and scenery he encounters in his everyday life — From beautiful tiles… To intricate mosaics… Sculptures en crayons - Jennifer Maestre When we are talking about pencil, what would you relate to? Maybe you would think about writing or drawing, but there is an artist who really thinks out of the box. She is Jennifer Maestre, a sculptor.

Explosion de couleurs - Hua Tunan Hua Tunan is a rising artist in China. Combining the traditional elements of Chinese art and culture with a modern twist, Hua brings about beautiful explosions on the canvas. Based out of Foshan, Hua (also known as 画图男) does performance and street art in addition to his paintings. Dessins insolites en noir et blanc sur des pages de cahier - Kerby Rosanes Kerby Rosanes is a Filipino artist, currently working and residing in Mandaluyong City. Rosanes initially considered drawing his most important hobby. It wasn’t until he began posting his sketches online that he decided to quit his day job and pursue his passion.

Pierres en équilibre - Michael Grab Michael Grab is an artist that has been ‘rock balancing‘ since 2008. Much of his recent work has been done around the Boulder, Colorado area. Grab finds the process both spiritual and therapeutic. On his site gravityglue.com, Grab explains: “The most fundamental element of balancing in a physical sense is finding some kind of ‘tripod’ for the rock to stand on.

Peintures translucides pour représenter les vagues de l'océan - Lia Melia Cambridge-based visual artist Lia Melia creates strikingly energetic paintings where curling and crashing ocean waves splash and splatter across the canvas. Having grown up near the sea, that is where artist Lia Melia continues to find her inspiration. "The seas moods can always express my deepest feelings," she explains. Melia uses a technique that is unique to her work in which she bakes powder pigments and paints onto a sheet of aluminum or glass.